Laura Caldwell embodies the American dream. Simply stated, she’s an amazing person who’s led a diversified and successful life. Published in over twenty-five countries, her novels have been translated into more than fourteen languages. In her other job, she’s a Distinguished Scholar in Residence at Loyola University Chicago School of Law.

Born in Chicago, Caldwell was raised in Crystal Lake and Woodstock, Illinois. She attended the University of Iowa and graduated with Phi Beta Kappa honors. After receiving her law degree from Loyola Law School, she traveled with two girlfriends to Italy and Greece. She didn’t know it at the time, but her overseas experience planted a seed. Caldwell then embarked on a successful career practicing law and became a partner in a downtown Chicago law firm where she specialized in medical malpractice and entertainment law.

But Caldwell felt a calling elsewhere, toward a more creative career. Her vacation in Europe had inspired an idea that wouldn’t go away. She had a story to tell and began taking writing classes. Using what little spare time she had, Caldwell wrote at night. Keep in mind this was her first attempt at writing a novel. Driven by an ever growing desire to finish the book, she took a risky sabbatical from her law practice and pushed hard to complete it.

Caldwell would soon discover that being an author tests one’s character. She’d written the novel, now it was time to share it with the world. But the world wasn’t buying. In a previous interview, she joked about needing larger mailbox for all the rubber stamp rejection letters that managed to give completely opposite advice. I loved your characters, but the plot didn’t engage me. I loved your story, but the characters didn’t feel right. The pacing was good, but I couldn’t connect emotionally. The passion was excellent, but the pacing dragged for me.

Her life changed when she met Margaret Marbury of Red Dress Ink. They crossed paths at the San Diego State Writer’s Conference. Red Dress Ink was a new imprint which focused on women’s fiction, which some call “chick-lit.” After telling Marbury about BURNING THE MAP, Marbury offered to read it. Ultimately, she offered Caldwell a three book contract.

Her debut, BURNING THE MAP, is a funny, moving, and thoroughly entertaining story of three friends who take a life-changing trip to Europe. It released with rave reviews. Booklist called it “a fun, snappy read.” And Barnes and Noble selected BURNING THE MAP as one of its Best Romance Books of 2002, calling it a “touching story of a young woman at a crossroads in her life.”

Although Caldwell began her writing career in women’s fiction, her focus would soon turn to mystery/thriller. By the time she met Marbury, Caldwell was already working on a thriller. BURNING THE MAP was followed by three more women’s fiction novels before she sold six mystery/thrillers, including the “Red” trilogy.The release of her “Red” trilogy in 2009 introduced Izzy McNeil. The Chicago Sun Times offers a suburb characterization of Izzy:

“Her fiery personality—an appropriate trait in such a proud redhead—and winning ways are what make these books so charming. Izzy is the whole package: feminine and sexy, but also smart, tough and resourceful. She’s no damsel-in-distress from a tawdry bodice ripper; she’s more than a fitting match for any bad guys foolish enough to take her on.”

But perhaps Caldwell’s most impressive achievement happened by chance. While researching her sixth novel, THE ROME AFFAIR, Caldwell discovered a disturbing case within the criminal justice system criminal. A nineteen-year-old man charged with murder had been sitting in a Cook County holding cell for nearly six years without a trial date.He’d been swallowed by the system and found by a renowned criminal defense attorney named Catharine O’Daniel. Caldwell joined O’Daniel to defend him, inspiring her first nonfiction book, LONG WAY HOME: A Young Man Lost in the System and the Two Women Who Found Him (Free Press, Simon & Schuster).

LONG WAY HOME tells the story of nineteen-year-old Jovan Mosley, a good kid from a bad neighborhood who grew up on the brutal streets of Chicago’s South Side. With one brother dead of HIV complications and another in jail for arson and murder, Jovan worked hard to break the cycle. He did well in school, dreamed of being a lawyer, and had been accepted to Ohio State. But the clutches of his environment wouldn’t let go.

In August 1999, Mosley witnessed part of a fight that, unbeknownst to Mosley, resulted in a man’s death. Six months later, unaware the man had died, Mosley was arrested, cruelly questioned, and forced into a bogus confession. He was then charged with murder and spent the next five years and eight months in a prison for violent criminals awaiting a trial.

Mosley studied what casework he could, rigorously questioning his public defenders. But time after time his case was continued. As the agonizing years ground on, Jovan nearly lost hope. He was going to spend the rest of his life in prison for a crime he didn’t commit. How could this happen? How could an innocent man be thrown into a holding cell for six years without his day in court? Fortunately, after a chance meeting in the jail, Catharine O’Daniel wanted an answer to that question as well. Even though O’Daniel knew nearly all cases with a signed confession resulted in a conviction, she was convinced of his innocence and accepted Jovan as her first pro bono client, eventually asking Caldwell to join her team.Called ‘deeply affecting’ and ‘destined for the big screen,’ LONG WAY HOME is both a legal thriller and a story of how friendship can emanate from the most unexpected circumstances.

Inspired by Jovan Mosley’s case and his challenges of rejoining society after the verdict, Caldwell founded Loyola’s Life After Innocence that assists wrongfully convicted individuals or other innocent persons reenter society and reclaim their lives.

At the RT Convention in Chicago, Andrew Peterson had a chance to sit down with Caldwell a few weeks before the paperback release of LONG WAY HOME. He asked her a variety of questions for this feature. Many fans want to know more about her protagonist, Izzy McNeil. Specifically, how much of Caldwell is in Izzy McNeil? In a nutshell, they both have red hair, blushing issues, and love of hanging out in dive bars. They have similar educational backgrounds and have lived in the same areas of Chicago. Their differences: Caldwell has never been a private eye and Izzy’s entertainment law practice is at a higher, more glamorous level than the one Caldwell had herself for a few years.

So what is Izzy’s Achilles heel? Caldwell says it’s this: “She thinks it sounds crass when people swear. The problem is she thinks it sounds great when she does it. She’s constantly coming up with replacement curses that never do the trick, like ‘mother hen in a basket!’”

Was there a professor or colleague at Loyola who influenced Caldwell’s career choice to pursue writing? “Professor Alice Perlin gave me my first job in legal academia. In addition to allowing me to keep my hand in the law, she knew I was working on a novel and encouraged me to continue.” 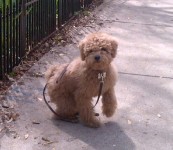 Most authors have beloved pets to keep them grounded in reality. Caldwell has a new family member. “Shafer Caldwell arrived in Chicago in February. I think she is one of the cutest creatures on the planet.” Shafer is a retriever/poodle hybrid and she looks like a real-life teddy bear.

Caldwell is a structured writer with a system to avoid distractions. “When I’m in full writing mode—rather than plotting mode or promotion mode—my schedule is 1,000 words a day, five days a week. Sometimes that 1,000 words takes forty-five minutes. Other times it takes four or more hours. I try not to check email or phone until those 1,000 words are done. I edit them the next day before getting to the next 1,000.”

Amazon is changing the way people experience reading. I asked Caldwell for her thoughts on it. “There are so many different ways to ‘read’ a book now. It will take a while for the dust to settle, but I think anytime we increase the ways in which people can enjoy a book, that’s got to be good ultimately.”

With her unique style, Caldwell would be a terrific young adult author. Is there a YA book in her future? “I do want to write a YA book! I want to spin off Kix and Kaitlin, the nieces of Maggie, Izzy’s best friend. In Izzy 1, Red Hot Lies, Izzy babysat Kaitlin as part of a ruse to pretend she was a  neighborhood mom, allowing her to listen to a witness on a playground. But for years, Izzy has been hearing about Kaitlin’s older sister, Kix (short for Katherine or some such) who, everyone agreed, was a second generation Maggie—fiendishly smart, full of humor and yet earnest and honest.”

What advice does Caldwell give to aspiring authors who have yet to break in? “Don’t big-picture it. Sure, you have to do that once in a while, to grasp what you’re working on, but otherwise, just ask yourself, what piece am I doing today? Then do that small piece. Then repeat. Words add up faster than you think.”

Laura Caldwell is a lawyer-turned-author-turned-life-saver. She’s a former civil trial lawyer and a Distinguished Scholar in Residence at Loyola University Chicago School of Law. She is currently the Director of Life After Innocence.

For information on Laura and a list of her novels, please visit her website, and read a detailed interview with Caldwell about her Izzy McNeil series. 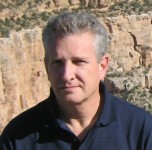 Andrew Peterson is the author of the Nathan McBride series. His two books, FIRST TO KILL and FORCED TO KILL are available in either audio or eBook format. To learn more about Nathan McBride, please visit Andrew’s website.

Andrew Peterson
Andrew Peterson is the author of First To Kill, the debut in a series featuring Nathan McBride, a former marine sniper and CIA operations officer.The next McBride novel, Forced To Kill, will be available early next year in exclusive audiobook format from Audible.com.Andrew works as a volunteer firefighter, enjoys scuba diving, target shooting, flying helicopters, hiking and camping, and an occasional sad round of golf.