OSI Agent Jericho Quinn made his debut in NATIONAL SECURITY. Now he’s back, riding his BMW motorcycle and rooting out Central Asian moles who have infiltrated American government at the highest levels.

Author Marc Cameron recently took time out of his busy schedule to answer some questions for TheBigThrill:

Marc, your latest thriller Act of Terror brings back rough-and-ready Special Agent Jericho Quinn from your blistering debut NATIONAL SECURITY. How much time has taken place between the two books and what has Quinn learned this time around that he didn’t know before?

Those who read NATIONAL SECURITY know there were some questions left unanswered and bad guys left at bay when the book came to a close. ACT OF TERROR begins on the heels of the last story. Jericho Quinn is still trying to reunite with his ex-wife at the same time he comes to grips with the rigors of his new job working for the president’s national security adviser. Though Quinn is an accomplished fighter, he’s still learning to deal with people, especially women. Marine Corps Gunny Jacques Thibodaux, who is the father of six sons, helps him out with this as they go along.

In a similar vein, what have you, as the author, learned from your debut adventure?

I didn’t really know how much time an author spent on promotion and advertising.  Though I’m a story teller and have always enjoyed telling ‘war stories’ about my job at parties, etc, I’d prefer to let the stories do the talking. Unfortunately, that’s not the way it works in this business.

Any big surprises that you weren’t expecting?

I’ve always looked at other authors with a bit of a skeptical eye when they spoke of characters who ‘got away from them’ and otherwise took control of their own destiny. But in this book, I had a character who was supposed to make an early appearance and die heroically. She impressed and interested me so much I couldn’t bring myself to let her go. She ended up with a major role in the story.

In ACT OF TERROR, Quinn begins to see a pattern emerge from certain terrifying random events. Some of your fictional situations are scarily reflected in the real world (in ACT OF TERROR, for example, a flight attendant attempts to crash an airliner, while in headlines recently, a commercial pilot had a nervous breakdown on a flight that could have proven just as deadly). Are you inspired by real-life events, and if so, how paranoid are you becoming?

I do look at what’s going on in the world when I’m plotting a book. All we have to do is read the news to see there are a lot of folks out there who’d like to do us harm. That said, I wouldn’t say I’m paranoid. As citizens of the United States we truly have some of the finest men and women in the world watching our backs out there. One of the things that most inspired me for this story was that National Geographic cover photo some years ago of the beautiful green-eyed Afghan girl. It made me think how relatively easy it would be for us as a nation to focus too much on threats that look a certain way. What if a group from, say, Central Asia – people who look like the folks we see in the mirror every day – decided they had a bone to pick with the United States? Would we even see them coming? That’s the question I ask in this book. Adventure and action spring from conflict – and there is plenty of opportunity for that in the world today. Years ago, myself and another young patrol officer got into a bad scuffle with a guy we were arresting for selling methamphetamine.  He put up a hellacious fight and we pretty much tore his apartment to shreds. By the time back-up officers arrived I had bits of sheetrock in my hair from all the holes we’d made in the walls and my partner’s uniform shirt was ripped half off.  The next officer on the scene had this crestfallen look on his face when he came through the door and saw our meth dealer cuffed and laying belly-down on the floor. “*@%#$,” he said. “There was violence and I missed it!” My hope is to bring to the page, the intensity of adventure this officer felt like he’d missed.

Judging by your bio (30 years in law enforcement, second degree black belt in jujitsu, motorcycle enthusiast) it’s easy to see how Quinn isn’t someone to mess with. Any particular characters from your own past that you get to seek revenge on in the fictional world?

Funny you ask that. Every boy my daughter has ever dated has a namesake in my books that dies in some horribly gruesome way. Other than that, I wouldn’t say revenge came into play. I do, however, draw on characteristics from the outlaws and bad guys I’ve arrested over the years. Some were crazy, a great many were oddballs, more than a few were just desperate, and a handful – the most interesting by far – were the pure epitome of evil.

Have you always wanted to be a writer or is this a new adventure?

I’ve wanted to write as long as I can remember – and I wanted to be in law enforcement from the time I started watching television with my grandpa and later seeing real-life lawmen around town. The two fields are actually pretty complimentary to one another. Writing helps me stay observant, and the people I worked with over the years have given me an endless supply of grist for the writing mill.

What do you think makes an American hero?

Since I cut my teeth in Texas law enforcement, I have always subscribed to the credo of the Texas Rangers that says: “No man in wrong can stand up against a fellow that’s in the right and keeps on a-comin’. ”

And should the good guys always win?

Yes, but not at every turn. Stopping the threat doesn’t mean coming through unscathed. In fact, we lose almost as many battles as we win along the way. That’s just life. That said, I want my heroes to stop the bad guys in the story – how they get to that point is the exciting part for me. Like the men and women who serve and protect the United States today, In ACT OF TERROR, Quinn is reminded that the life of action he’s chosen comes at great personal and physical cost. The thing that I believe makes him a hero is that he’s willing to go ahead and do it anyway. Since Quinn speaks fluent Mandarin, Chinese proverbs come up now and then in the books. One in particular typifies the realities of real-world violence: ‘When two tigers fight, one is injured beyond repair – and the other one is dead.’ 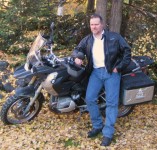 Raised in central Texas, Marc Cameron spent nearly thirty years in the gun-culture of law enforcement. His assignments have taken him from Alaska to Manhattan, Canada to Mexico and dozens of points in between. He holds a second degree black belt in Ju Jitsu and is a certified man-tracker. An avid adventure motorcyclist, Cameron’s books heavily feature bikes and bikers–from OSI Agent Jericho Quinn’s beloved BMW GS to Harley Davidsons, Royal Enfields, Ducatis and…

Cameron lives in Alaska with his wife, blue heeler dog and BMW GS motorcycle. To learn more about Marc, please visit his website.