In April, Robert Liparulo, the best-selling author of COMES A HORSEMAN, GERM, and THE DREAMHOUSE KINGS series of adventures for young readers, will release his contemporary thriller THE 13TH TRIBE (Thomas Nelson, Inc.). The trade paperback original features a group of immortal vigilantes roaming the earth and killing criminals. When they cross paths with Jagger Baird, head of security for an archaeological dig, Jagger has to stop them to save his family and the tribe’s next target: an entire city. But can one man stop these timeless, high-tech killers?

Liparulo, a former journalist, is currently writing an original screenplay with Andrew Davis, the director of THE FUGITIVE. After that, he’ll work on the sequel to THE 13TH TRIBE and another YA series. He recently sat down for an interview:

Would you describe your path to becoming a novelist?

I’ve wanted to be a novelist since reading Richard Matheson’s I AM LEGEND when I was twelve. Just wanting to write, I’d try my hand at anything and everything—screenplays, radio dramas, poetry, songs. I started writing celebrity profiles and concert reviews and really liked it, which was a tragedy for my novel-writing aspirations. I eventually got into investigative journalism, which I enjoyed, as well. So essentially, I wasn’t miserable enough to pursue what I really wanted to do. But some author friends knew my dreams and began pestering me to write a novel. It got to the point that I started my first novel, which became COMES A HORSEMAN, simply to get them off my back.

What are some big differences between journalism and novels?

Novelists flex a different part of the creativity muscle than journalists. Where journalists might hook the reader with a stunning fact, a novelist is more inclined to pull in readers by demonstrating his or her ability to turn a phrase or vividly describe scene. It used to be, magazine writers could get away with creative descriptions, metaphors, analogy, but over time, as budgets got tighter and content pages were reduced, editors wanted leaner, more to-the-point articles. I know several publications that went the “just the facts, ma’am” way then couldn’t figure out why their readerships declined. It’s because their stories became homologized and boring. Novelists have more rein to experiment and dwell on an action, character, or location that intrigues the writer.

The other big difference is speed of publication. Articles will come out from a few weeks to a few months after the writer finishes. You might be researching a novel now that will take nine months to write and another year in production pipeline toward publication, so you won’t see the fruits of your labor for, say, eighteen months. I liked the shorter turnaround in journalism. It’s motivating. But then again, articles are far more impermanent than novels, which can get to you after a while.

As a writer, what are some differences and similarities between thrillers and action-adventure novels for young adults?

There are definitely more similarities than differences. I think what made the DREAMHOUSE KINGS successful was my determination not to underestimate my readers, to not talk down to them. When I sat down to write the books, I decided that there would be only two primary differences from my adult thrillers: The protagonists would be younger (they’re 12 and 15) and the story itself would be something more appealing to young readers than high-tech private armies (DEADLOCK) or serial kills manipulated by an antichrist wannabe (COMES A HORSEMAN). That more interesting hook in DREAMHOUSE is time travel.

I tend to edit as I write, so except for going back when it’s finished to make sure the scene transitions flow and to clarify here and there, what I write is what you get. Most of the editing I do while writing is mental before the words hit the page, so I’ll guess that it’s ninety percent, ten percent editing. That’s before I turn the manuscript in. Whatever questions or concerns my editors have, of course I’ll address. I have wonderful editors who respect my style, so they don’t come back with too many notes.

I don’t outline, per se. I want my characters to lead me through a story. If I outline too extensively or too far ahead, then it’s me, as an author, who is forcing my characters to behave the way I would behave in those situations. When I create compelling characters and set them free, they develop what seems to be personalities and behaviors all their own. They start to do things I never would have dreamed they would. They respond differently from the way I thought they would when I thought through the story. But I do have certain points in the story that I know have to reach. I just prefer to let the characters tell me how to get there. Typically, I know about three days in advance which scenes are coming up. That helps me stay on track without being too overbearing on my characters. It’s the best of both worlds.

Since your first novel was published, what are some differences (pro and con) that you’ve experienced with the publishing industry?

This seems like an “of course,” but maybe it’s just me: I think the biggest change has been diminishing shelf space and distribution opportunities. The loss of Borders is a biggie. There’s just no way to recoup the point of consumer contact.

E-books are a mixed blessing. On one hand, they make it easier to purchase books, so I think impulse buying is up. Someone can read an interview or profile of an author or a book review, and on the same device click a few buttons and buy the book.

But typically, e-books have tighter margins, so an author may not make as much per sale. And I don’t like the trend of offering free e-books for a limited time as a marketing strategy. A lot of readers will grab a book only because it’s free, regardless of their reading tastes. So you have people who prefer Amish fiction reading shoot-em-up thrillers, then posting reviews that the book was terrible.

What compelled you to write THE 13TH TRIBE?

When I conceived of THE 13TH TRIBE, it was a thriller set in the real world. Then I realized I could explore its theme—which is primarily vigilantism, frontier justice—even better if I stretched reality just a bit. It opened up all kinds of storytelling possibilities that I think readers will find entertaining and at the same time intriguing and thought-provoking. I’d already written the DREAMHOUSE KINGS, which showed me just how fun a tinge of fantasy could be (through the family’s time traveling). Readers made it a bestselling series, so I knew my fans would follow me into that genre, as long as I gave them the other elements that make up a Robert Liparulo story—lots of action, adventure, and realistic characters who fight and love and have strong emotions.

It was never my intention to use the supernatural as a gimmick, as a way to circumvent quality storytelling. I strove to create a character-driven story with an interesting plot and a visual, active writing style. The supernatural element simply adds another layer, another color I could use to paint my story.

How did you research it?

I read books and talked to experts about immortality, biology, theology, weapons (like flame throwers), high-tech military inventions (such as invisibility suits), relics, archaeology … I filled six three-inch binders with notes, maps, and photographs. As a former journalist, I tend to research a lot, and I have no qualms about asking the leading experts in their fields for interviews and throwing tough questions at them. I try to find the little gems that either stun readers or make everything in a scene feel just right.

I believe the only way to make such a wild concept as immortality palatable and entertaining to readers is to make everything else in the story as factual and real as possible. All the locations are real, and I hope detailed enough for readers to get a true feel for each place. And one way the immortals are traced through history is through actual art—such as the Spinario or Boy with Thorn and Jean Auguste Dominique Ingres’s Apotheosis of Homer. I did a lot of research into biblical events, such as what really happened at the golden calf, and studied extra-biblical stories, such as the apostle John being tortured by putting him into a vat of boiling oil. Many of the historic events described—a Civil War massacre, Rasputin’s death—really happened.

Now that you’re working on an original screenplay, what are some challenges compared to writing novels?

Writing screenplays can certainly be challenging for a novelist. Primarily, I always have to remember that movies are a visual medium, so audiences can see the detail of an old building or that a character is charismatic; they don’t need me telling them. Conversely, you can’t say something like, “He looks at the pistol, which his grandfather gave him,” unless you’ve already explained through dialog or imagery who gave him the gun.

And you have to learn not to “direct on the page,” that is, you don’t want to describe camera angles, which is the director’s job. Novelists are used to being in complete control of what’s presented to an audience, whereas film is collaborative. You have to know where your role ends in the storytelling process, and another person’s begins. 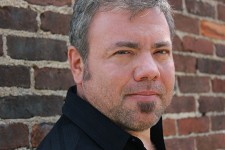 Former journalist Robert Liparulo is the best-selling author of Comes a Horseman, Germ, and the Dreamhouse Kings series of adventures for young readers. He is currently writing an original screenplay with Andrew Davis, the director of The Fugitive. After that: The sequel to The 13th Tribe and another YA series.

David Raterman
David Raterman is the author of The River Panj, an emergency relief thriller set in Afghanistan, ex-Soviet Tajikistan and the United States. Since 2005 he has written books for National Geographic and Knopf/Random House and is a features correspondent for the South Florida Sun Sentinel. Raterman worked two years for CARE in Tajikistan along the Afghanistan border and seven months in a clinic that made artificial limbs for soldiers and war victims in Armenia.