Mitzi Kelly is the author of The Silver Sleuths Mystery Series which features the adventures of Millie, Trish, and Edna, three friends who find themselves drawn into the world of crime and intrigue as they work to solve baffling mysteries in their hometown.  The first book in the series, CLASSIC REVENGE, was described by SUSPENSE MAGAZINE as “Crime investigation meets the Golden Girls!  This book has it all.”

Now Mitzi is back with book two, DEADLY POLICY.

When a sudden rash of stolen cars brings Millie’s daughter under suspicion for conspiracy to commit insurance fraud, Millie convinces her two best friends, Trish and Edna, to help her find out who is trying to frame Michelle. Knowing the odds are zero that they will be able to discover who the thugs are, Trish and Edna nevertheless go through the motion of investigating, hoping Millie will feel productive in helping her daughter while the police do the real detective work.

The situation becomes much more serious, though, when a body is found in front of the insurance office, and even though the evidence pointing to an inside job is purely circumstantial, it could still destroy Michelle, something the ladies are determined is not going to happen. But keeping Millie out of trouble while attempting to clear her daughter’s name will take every ounce of skill . . . or luck . . . the amateur sleuths possess.

I recently caught up with Mitzi who had a lot to say about the exploits of her Silver Sleuths as well as the nature of writing mysteries.

DEADLY POLICY is book two in your series featuring Millie Morrow, Trish Anderson, and Edna Radcliff. For those new to the series, could you tell us something about them, who they are and what they do?

I think the easiest way to answer this question is to say what won’t they do?  Millie, Trish, and Edna are a trio of elderly women who are neighbors and friends. At age 82, Millie is the oldest. She is stubborn, somewhat eccentric and a real troublemaker. Edna is in her mid-sixties, a sweet loveable character who will bend over backward in an effort to not hurt anybody’s feelings. Trish is in her late forties, is allergic to exercise, and is the most level-headed of the bunch. They all have one thing in common, though. Well, two things, if you count their love of coffee. They are loyal to a fault to those they love and to each other.

In CLASSIC REVENGE, the ladies set out to prove their neighbor did not kill his wife. This is their first attempt at detective work and, what they lack in formal training, they make up for in determination, ingenuity and pure luck. Faced with danger and evil, they plunge full-steam ahead to right what they feel is a terrible wrong, much to the dismay of the chief of police.

DEADLY POLICY finds the ladies expanding their investigative ‘know how’ as they work to prove Millie’s daughter is not involved in insurance fraud, even though the evidence can be construed as such. But what starts out as only an unusual amount of cars stolen from victims of the same insurance company quickly escalates to murder, and whoever is behind the crime knows that the ladies are sticking their noses where they don’t belong.

The Silver Sleuths Mystery Series brings the cozy mystery to a whole new level. Millie, Trish and Edna are charming characters involved in believable plots. Each story is filled with good humor, warm, honest relationships and plenty of intrigue.

What aspect of writing mysteries do you find the most challenging?

I’d have to say it’s in introducing the bad guy without giving too much away. When I bring the culprit into the story, I already know that he—or she—is a scumbag but I don’t want the reader to know it yet. It’s difficult sometimes to find traits that are appealing enough to keep the reader guessing when in my mind I’m thinking “Don’t fall for that! He’s (she’s) lying to you!”

What aspect do you find the most rewarding?

The best part of writing mysteries is when the characters take over and start telling the story. Here you’ve outlined the whole story, you’ve developed the clues leading to the big event, and somewhere smack dab in the middle one of the characters takes a different turn and new possibilities pop up.  It’s so much fun!

What advice would you give to new writers just starting out?

I think the very best advice is to never give up. I know everybody says that, and everybody has heard it a million times. But I think new writers can easily fall into the trap of giving up if they receive a rejection letter, thinking the editor is making a personal statement about their talent. The best thing to do is to file that rejection letter in a folder. It may sit there alone, or it may be one of many on the path to publication, but eventually you are going to receive an acceptance letter and an offer, and you can place that letter on top of the others while you stick your tongue out at them and say “It’s your loss.”  (Say this under your breath, though. You don’t want to burn any bridges!)

I’m currently working on the third installment for The Silver Sleuths.  This one is proving more challenging than the others due to Millie’s hard-headedness.  I’m also working on a contemporary romance trilogy.  Even my romance novels hold a bit of suspense as mysteries are my true first love!

Harlequin Worldwide Mysteries will be publishing the paperback version of the first book, CLASSIC REVENGE sometime later this year. 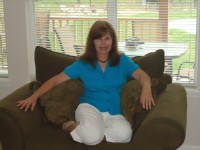 She loves to hear from readers and can be contacted via her website.