Down on Primrose Lane lived a strange old man who always wore mittens. Not much was known about him – until he was murdered. Four years later, a true-crime author, David Neff, starts looking into the case. Neff has his own demons: a best-selling author, he is still reeling from his wife’s suicide. And as he begins to investigate the murder, he finds that his own demons may be as dangerous as those in the outside world. Real-life award-winning short-story writer and journalist James Renner took the time to discuss his debut thriller, THE MAN FROM PRIMROSE LANE, which will be published this month by Sarah Crichton Books.

You can read more about James and THE MAN FROM PRIMROSE LANE on his website.

James recently sat down with ITW for an interview:

THE MAN FROM PRIMROSE LANE draws quite a bit from real life. Can you tell us a little about your background as a journalist?

I worked for the Cleveland alternative weeklies: SCENE, THE FREE TIMES, THE INDEPENDENT. I wrote a little bit of everything but I particularly enjoyed reporting on unsolved crimes. It’s a bit like treasure hunting because you’re searching through the past in these old police files, some decades old, looking for that one clue that has been overlooked. I get a thrill from showing up at a suspect’s doorstep and asking him pointed questions. I like for them to know that someone hasn’t forgotten what they did.

Have you ever investigated a real-life serial killer?

I looked deep into the case of Bob Buell, an accountant for the city of Akron, who is alleged to have killed several young girls in the early 80’s. He was put to death in 2002, so I never got to talk to him. But I spent a lot of time trying to figure out exactly which other crimes he had a hand in. The difference between a serial killer and a guy who kills in the heat of the moment, is these guys are predators. Just pure animals in human disguise. Running on instinct. Looking for the next kill. There’s a lack of empathy in them that is truly chilling. I don’t believe any sort of experience could have made them end up that way. I think they were born with a broken mind.

In THE MAN FROM PRIMROSE LANE, your protagonist finds a story has taken over his real life: Have you ever investigated a story that ended up invading your life?

I’ve spent several years looking into the 1989 unsolved murder of Amy Mihaljevic, who was my age and lived not far away when she was abducted by an older man when she was ten. I’ve spoken to dozens of suspects and practically every police officer and FBI agent that worked the investigation. I’ve flown to Florida to interview people. That case never leaves me. But eventually, you have to distance yourself from these tragic stories. You can’t let yourself believe that this is the way the world really is. It took me awhile to recognize that finding her killer was becoming an obsession. It took even longer to find a healthy distance from all that.

What real journalistic experiences inspired THE MAN FROM PRIMROSE LANE?

David Neff, the tragic hero of the book works for an alt weekly in Cleveland. The inter-action between reporters in the writer’s den, that sick gallows humor, that too-personal-interplay, that’s all very real. Reporters always hate and love other reporters. And, at least in my experience, the real teaching moments come at the local honky-tonk.

How often do you use real events in your fiction?

I think John Irving warns about using real events in fiction. Someone in THE WORLD ACCORDING TO GARP says it’s a lazy writer trick. But it’s also a beginning writer trick. You have to start out with what you know before you can imagine another world that feels true. So, THE MAN FROM PRIMROSE LANE is very autobiographical in a way. But as I continue to work on my craft I’m trying to put those tricks aside. The new stories I’m developing have little to do with my life, although I still draw from my experiences.

Have you run into any real events that are so strange that nobody would believe them in a mystery?

I once tracked the prime suspect in Amy Mihaljevic’s murder to Key West. Spent a day searching for him all over the island. Couldn’t find him anywhere. I put a call out to the universe for help. Call it a prayer. Whatever. No sooner had I asked for help than the suspect walked in front of my car at a stop sign. True story.

Do you work as a journalist now?

I’m investigating the 2004 disappearance of Maura Murray, a UMass student who vanished in the North Country. That will probably be my next nonfiction work.

How do you research, now that you’re writing fiction?

It’s really the same research I did as a journalist. In order to make murder mysteries read true, you have to learn all about stuff like how blood pools under the skin after someone dies or how police execute a search warrant. All that can be found in the public record of real-life crimes. But with fiction, you get to delve deeper into odd characters, sometimes. Last week, I got to research fun stuff like how to make Red Velvet cupcakes and how step pyramids are constructed.

Do you read true crime?

I seldom read true crime. I have no interest in crimes that have already been solved. I like unsolved mysteries. Unfortunately, publishers are sort of uneasy about publishing true crime that doesn’t have a solid ending.

What’s next for you, James Renner, and for David Neff?

Next up for James Renner is a new novel. Already finished. Labeled and resting on a shelf in my agent’s office. It’s my love letter to conspiracy theories. If THE MAN FROM PRIMROSE LANE is about obsession, the next book is about paranoia. It’s not a David Neff story. But there is room for another one, if people find they like the character as much as I do. I already know which mysteries he’s been looking into. There’s two of them and it’s a lot for him to juggle.

The thing that scares me the most is when I’m in bed and just falling asleep and I’m picturing a murderer, perhaps one I’ve written about, standing outside my bedroom door. I’m afraid he’ll start pounding on my bedroom door. I think that sound out of the quiet of the night is so terrifying. I’d probably die of fright.

Thank you so much, James! Stay safe… and sleep tight. 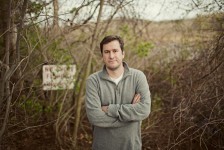 James Renner spends his spare time hunting serial killers and writing about his misadventures. His true crime stories have been published in the Best American Crime Reporting and Best Creative Nonfiction anthologies.

He lives in Akron, Ohio with his wife, Julie, and son, Casey. To learn more about James, please visit his website.

Between the Lines: An Interview with James Patterson by Julie Kramer

Death, Taxes, and a Skinny No-Whip Latte by Diane Kelly