Neal Baer and Jonathan Greene have been the creative driving forces behind some of television’s most popular dramas including LAW & ORDER: SPECIAL VICTIMS UNIT and ER.  But they have now delved into the world of novels with a debut that has been described as “a psychological thriller of the first order” and a “masterwork of psychological suspense.”

Their novel, KILL SWITCH, is the first of a series featuring Dr. Claire Waters, a brilliant, young forensic psychiatrist with unnervingly personal insight into the criminal mind. Haunted by a disturbing childhood incident in which her best friend was abducted and never found, Claire has always been drawn to those rare “untreatable” patients who seem to have no conscience or fear. She has a natural ability to put people at ease, to draw out their darkest secrets, and she believes that by understanding what motivates violent criminals, she can help prevent them from committing further crimes. But one shocking case could make or break her career — and it’s waiting for her in the psychiatric wing of New York City’s Rikers Island Prison.

I was given the opportunity to interview Neal Baer about their exciting debut novel, the intricacies of crafting a weekly television program, and the differences between the screen and the page.

You’re best known for your work in television, but now you’re branching off into novels.  Is this your first novel, and has working in this medium always been a goal?

KILL SWITCH is our first novel, but I’ve always wanted to try my hand at writing a different kind of fiction from teleplays and screenplays.

What led you to craft KILL SWITCH as a novel as opposed to a screenplay or teleplay?

KILL SWITCH began as a screenplay, actually, nine years ago.  Jon Greene and I worked on a detailed outline for a movie thriller, devised all the plot points, and then life interceded and I put the outline away, never writing the script.  Two years ago, our literary agent, Lydia Wills, asked me if I had ever written a medical thriller, knowing that I’m a physician — a pediatrician — and back then was the Showrunner (head writer) of LAW & ORDER: SPECIAL VICTIMS UNIT.  I pulled the outline of my bottom desk drawer and sent it to her.  Back then it was called BLINDSIDED (we changed the title after the film BLIND SIDE came out).  She read the outline and suggested we turn it into a novel, asking us to write the first three chapters.  We turned those in to her and she asked us to write two more.  Then we shopped it to publishers.  Kensington bought it and two additional books with the same protagonist, Dr. Claire Waters. 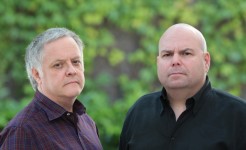 You wrote this book with your Co-Executive Producer Jonathan Greene.  Can you give us some insight as to how the two of you approached writing a novel in tandem?

We sit together for hours and hours breaking the story, as we do when we write for TV.  Together we beat out the chapters and then we individually write different ones.  Then we rewrite each other’s chapters, sharpening, enhancing, polishing, over and over, until we’re satisfied.  Our process is one of rewriting and rewriting, using an outline we’ve both worked on together.  In that way, we know our characters well because we’ve discussed them over a lengthy period.

You’ve worked as the Executive Producer and Showrunner for several popular television programs.  Can you give us a quick look into the difficulties and complexities of putting together a weekly show like ER or LAW AND ORDER: SVU?

As the Showrunner of SVU and now A GIFTED MAN, I’m responsible for the creative vision of the show.  I hire the writers, directors, editors, cinematographer, art director, wardrobe designer and actors and we must all work collaboratively to produce the show.  I work individually with everyone to discuss my vision of the show — how it should look, what the actors should wear, how it should be lit.  And I work with the writers to develop the overall arc of the storytelling as well as what the individual episodes should be.  I do notes on every script — I did 239 on SVU — and rewrite them as well when necessary.  We spend seven days prepping each episode (casting, wardrobe, props, working with director) and eight days shooting it.  Then we spend at least another two weeks editing the show and doing all the postproduction work: adding sound effects; new dialogue; musical score; special effects.  The episode train heads down the tracks with alarming speed and one must keep a lot of balls in the air and never fall behind.

Writing for the screen is a like laying out a blueprint for many people to build a show on.  As a screenwriter we write dialogue for the actors and prose that describes the scene.  Then all the departments work to realize our vision.  It’s an amazing collaborative process really; we count on so many talented people as I mentioned above to make the show work.  Writing a novel is very different.  The novelist is the actor, the cinematographer, make-up and wardrobe artist and set designer.  The story is completely presented through words on a page.  It’s gratifying to write something that’s wholly one’s own, which is what a novel is.  It’s the writer speaking directly to the reader.  It’s a little frightening to be on the tightrope alone with no net.  When one is doing a TV show or movie, there are so many people who can support you.  Nevertheless, TV, movies and novels all must have great stories in order to succeed.  The responsibility is different for a novelist.  It’s all on him or her to tell the story.

I’ve heard that KILL SWITCH may soon be coming to the big screen.  Can you give us some details on this?

Yes, we have a wonderful producer, Kevin McCormick, who has been producing movies since his first one:  SATURDAY NIGHT FEVER.  And we have the remarkably talented Katherine Heigl attached to star as Claire Waters.

What kind of research did you conduct for KILL SWITCH?

I’m a pediatrician, so I know much about the medicine in the book.  We spoke to a molecular biologist at Harvard Medical School, Dr. Alfred Goldberg, about apoptosis (programmed cell death) and we talked to forensic psychiatrists as well.  Jon worked as a journalist for Court TV and has a lot of experience reporting on crime stories, so his experience influenced the police procedural elements of the book.

Was there anything particularly interesting that you discovered during your research that didn’t make it into the novel or something that you’d like to highlight?

Just the other day, the NEW YORK TIMES reported that for the first time, the federal government was seeking to censor data to be reported in Nature and Science highlighting experiments on avian flu genetically modified to be more transmissible to humans.  Understandably, the government is concerned that these data could easily fall into the hands of terrorists seeking to modify the virus to use in biological terrorism and warfare.  KILL SWITCH raises these issues too and it was shocking to see the story we were telling coming true in the headlines one week after our book was released.  I used to joke that the headlines were often ripped from SVU; now I have to say that the headlines are seemingly ripped from the pages of KILL SWITCH!

I’m reading ZERO DAY by David Baldacci and THE LEOPARD by Jo Nesbo in the thriller genre; and I’m reading TO THE END OF THE LAND by David Grossman — a brilliant book about mother’s journey through Galilee as a way to deal with her son reenlisting in the Israeli Army.

How collaborative everyone is.  We’ve worked with a terrific editor, Michaela Hamilton, and her team has been extraordinary in promoting, selling, designing the cover of the book.  We didn’t know what to expect, but we couldn’t be happier with the support Kensington has given us.

KILL SWITCH is billed as the first in a new series? Can we get a sneak peek at what’s to come for Dr. Claire Waters?

Claire will be moving toward the end of her training in forensic psychiatry and find herself in the middle of a challenging and life-threatening case.  Stay tuned!

To learn more about Neal Baer and Jonathan Greene, please visit their website.