No thriller is more personal than the medical thriller.  We all get ill or injured.  Any one of us could die… today.  And sometimes, what we trust the most, medicine, is the biggest danger of all.

In Richard L. Mabry’s latest novel, LETHAL REMEDY, Dr. Sara Miles’ patient is on the threshold of death from an overwhelming, highly resistant infection with Staphylococcus luciferus, simply known to doctors as “the killer.” Only an experimental antibiotic, developed and administered by Sara’s ex-husband, Dr. Jack Ingersoll, can save the girl’s life.

Dr. John Ramsey is seeking to put his life together after the death of his wife by joining the medical school faculty. But his decision could prove to be costly, even fatal.

Potentially lethal late effects from the experimental drug send Sara and her colleague, Dr. Rip Pearson, on a hunt for hidden critical data that will let them reverse the changes before it’s too late.

Richard, a doctor himself, knows our greatest fears, and he knows the value life.  His thrillers balance the thrills with great heart and the loving relationships that make us most human.

ROMANTIC TIMES BOOK REVIEWS gives his last two novels 4 ½ stars each, and LIBRARY JOURNAL praised the work. His novel, MEDICAL ERROR, is a finalist for the Book of the Year award of the American Christian Fiction Writers. LETHAL REMEDY is his fourth novel.

“Dr. Mabry takes his knowledge of the medical profession, combines it with a ticking clock, and gives the reader a problem we’d all be terrified to face. What more could the reader of a good medical suspense ask for. “—The Suspense Zone, July 2011.

“A fast-paced inspirational medical thriller that will hold you spellbound.” —Fresh Fiction, August 2011

I’ve been a longtime fan of medical thrillers starting with Robin Cook’s Coma back in the ‘70’s.  Medical thrillers, much like legal thrillers, combine the idea of an expert hero along with the vulnerable “everyday hero,” who does not know kung fu, or own an uzi, or have connections in the CIA.  The hero of medical thrillers is an expert in his or her world of medicine and science, yet an amateur when it comes to danger, using force, and facing down human evil.  How delicious.

Tell us about your series and this latest, the 4th, that’s due out in October.

My four novels are independent but with a common thread: either a prescription or treatment that causes a problem for the doctor and/or her patients. In this one, patients are dying from a bacterial infection that is resistant to every antibiotic except one—an experimental drug the researchers say can cure 100% of infected patients with no side effects.

Dr. Sara Miles doesn’t believe either these claims or her ex-husband, a developer of the so-called wonder drug, but she can’t risk the life of her teen-age patient by withholding treatment.

As time goes on, though, it’s obvious that someone has lied, and the “wonder drug” is capable of killing more than just bacteria. Sara and her colleague have to fight past a stone-walling drug company and research team to find the key to reversing the process before it’s too late.

Every author is driven by an idea or scene that drives them to write the book!  What is the idea behind this novel?

My thirty-six years of medical practice, ten of them as a medical school professor, included participation in several research projects. In addition, I served as a consultant to several pharmaceutical firms. Although I never observed any of this, I sometimes read in newspapers or professional journals of research that had been fabricated for various reasons. I began wondering what some of the consequences might be if “doctored” research results were used to push a sorely needed drug onto the market without adequate safeguards. That was the beginning of LETHAL REMEDY.

Tell us about the journey in writing this story.  Smooth sailing or more like a twisted prison escape?

I suppose there are some authors who can sit down and knock out a novel without producing a drop of perspiration, but I’m not one of them. The way I try to work is to get a hook in mind, then populate the story with the basic characters needed. I visualize what the major tension points will be along the way.

After that, it’s a matter of starting to write, letting the characters develop themselves along the way, and often discovering twists and turns that I hadn’t initially imagined. This means that I’m constantly going back and making changes to assure consistency, but it seems to work in the end.

How can we see the influences of your life in this story?  What aspect or character is most like you?

Obviously, the setting reflects my background and experience. As for a character, I’d chose the one my age who shares much of my history: Dr. John Ramsey is seeking to put his life together after his wife dies shortly after his retirement. He thinks that maybe joining the medical school faculty will give him a new lease on life, but instead it threatens to be the cause of his death.

Research lover or hater?  What were the aspects that required the most research and how did you bring research to life?

You’d think that as a physician I wouldn’t have to do much research for my medical novels, but that’s not the case. For this one I had to delve into infectious disease, immunology, and a bit of pharmacotherapy. Years ago, this would have meant hours spent in the medical library of our local medical school, but now I just log on to some of the medical research sites I have bookmarked and start surfing.

As for bringing my research to life, that was easy in this case—my protagonist is doing the same kind of research, and the stakes are life-and-death.

Thriller and mystery writers love to celebrate their genre and also bring unique stories, worlds, and characters to life.  Tell us more about those fresh elements that compelled you to spend months or years writing this story.

I’ve been a mystery and thriller reader for as long as I can remember, so when I decided to try my hand at fiction, I knew that it would have those elements in a medical setting.

As for months and years writing this story, my comment is “I wish.” Although it took well over a year to write my first published novel, since that time I’ve produced three more (including this one) at a rate of one every six months. That’s neither ideal nor desirable on my part, but it was what my publisher wanted.

And what about your main character (or villain) makes that character so special to you?

The protagonist, Dr. Sara Miles, is battling self-doubt along with all the other problems she faces, and I think we can all identify with that. As for the villain—well, you can pay your money and take your choice as to who the real villain is. That information doesn’t come until the end.

You describe your books as “thrillers with heart.”  Tell us about the heart of your characters and their beliefs.  How is the vulnerability of caring woven into your world of thrills?

Second, and equally important to me, is the subtext of the characters’ location on their journey of faith, whether they are currently in a comfortable place, are struggling with tough times, or have made a conscious decision to turn away from God.

I write in the genre of Christian fiction, and try to show that Christianity doesn’t offer immunity from bad things, but rather the grace and strength to get through them.

Okay, let’s talk Texas!  Where you live often seeps into your fiction.  Does Texas make an appearance in your medical thrillers?

Oh, most definitely. The setting for my first novel is an imaginary North Texas town that combines some of the qualities of the places where I grew up and went to college. Novel number two takes place in Dallas, and is centered on the campus of the medical school where I graduated and later returned to teach. These areas are featured in my other books as well. In my opinion, the place I know best is the best setting for my books.

What’s the easiest way for Readers to find your book?

All my books are available from any of the major online booksellers and should be in stock or easily ordered through an independent bookseller. And, in case anyone is interested, they are available as conventional printed books and in all the standard electronic book forms.

Give us the scoop on what you’re writing now.

I’m about halfway into the first draft of a book about a doctor who leaves the ER after midnight and is kidnapped, thrown in the trunk of his car, and driven away to be killed. He manages to escape, at the price of a head injury that requires emergency surgery. He awakens in the ICU to discover that he’s suspected of murder. As things go from bad to worse, he finds that his only hope lies in a red-haired attorney who has just declared she wants nothing to do with doctors in the future.

And finally, if you could have any thriller/mystery author write a story just for you, who would that author be and what would he or she write?

I’d like Lee Child to collaborate with Michael Palmer to produce a book about what might happen if Jack Reacher went to medical school. And then I’d play Reacher in the movie, of course. 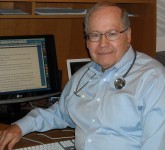 Richard L. Mabry, MD, is a retired physician and medical school professor who achieved worldwide recognition as a clinician, researcher and teacher before turning his talents to non-medical writing. Richard’s last two books, Medical Error and Diagnosis Death, both received critical acclaim, including a 4 ½ star rating (the highest given) from Romantic Times Book Reviews. Lethal Remedy is his fourth novel. Richard and his wife live in North Texas.

Diane Holmes
DianeHolmes is the founder and Chief Alchemist of Pitch University, thefirst online, no-cost resource where writers who "suck at pitching" canlearn to pitch their books from the agents and editors who make their livingdoing it.
She’s founded writers’ groups,co-owned a small press, had plays produced, written novels and scripts, runwriter's contests, held offices in writing organizations, taught writing… andjust like you, she sucks at pitching her own books.
Her columns Fiction-Zone:Leaps in Fiction Mastery and Marketing-Zone: Marketing Yourself and YourBook are featured on Freelance-Zone.com.