Lee Child proclaimed David Levien to be a “must-read thriller writer,” and David’s work has been described as “Violent and compelling, with the flavour of Michael Connelly’s Harry Bosch, this is American thriller writing at its rocket-fuelled, roller-coaster best.”  David has written three books featuring retired detective, Frank Behr, but he is also well known for his screenplay and directorial work on such popular Hollywood productions as Ocean’s Thirteen, Rounders, Knockaround Guys, Walking Tall, and Runaway Jury.

In the newest book in the series, 13 Million Dollar Pop, Frank Behr is on an executive protection detail for Bernard “Bernie Cool” Kolodnik, a hard-driving real estate mogul on the verge of making a move into big-time Indiana politics, when it all goes wrong in a chaotic burst of automatic weapons fire.

Behr has been working for the Caro Group, an exclusive “white-shoe” private investigation and security firm, and finds it an uncomfortable fit, both literally and philosophically. But with his girlfriend, Susan, pregnant and near her due date, Behr has had to put his private detective lifestyle on hold in order to make a salary.

Now with his white-collar stability rocked by the attempt on the prominent client’s life, Behr can‘t help but investigate what happened—and question why the Indianapolis Police Department seems to be burying the incident. Navigating a labyrinthine landscape of hardened former feds, crooked real estate developers, casino magnates, and power seekers feeding on the edge of a dangerous political scheme, Behr goes head-to-head with a cold-blooded assassin who is more terrifying than anything ever seen in Indianapolis.

You are probably best known for your work on films such as Ocean’s 13 and Rounders.  What made you want to focus on writing novels?

My first novels (Wormwood and Swagbelly: A Novel For Today’s Gentleman) actually came out contemporaneously with my first films.  Then there was about a five year gap before I wrote City of the Sun.  For me the goal and the dream was always to do both films and books.  Films are generally much bigger investments than books and are consequently promoted much more widely, but I’ve been at it the whole time!

What are some of the differences that you’ve found (beyond the obvious) between writing novels and screenplays?

There are just a hell of a lot more words in a novel!  The truth is, while a screenplay has to read well, it is also primarily a blueprint for the film that is to come.  It needs to present a story and tone, and gather momentum, and induce other creative people aboard, but it always points to what the work will be in the end.  No one wants to end up in a position where it is said:  the script was better than the movie.  With a novel the words on the page are all the writer has to keep the reader going, to captivate and deliver the full experience. Also, when it comes to mainstream films there is a stricter sense of structure than is applied to novels.  Novels need to obey some basic dramatic tenets, but there are many, many exceptions when it comes to structure and form.

You are from New York and have lived in Los Angeles as well.  What then led you to place your book series in Indianapolis instead of one of those cities?

It was all about the crime in the first book in the series, City Of The Sun.  I knew I wanted the crime, an abduction of a boy, to occur in a bucolic setting where that kind of thing was far from the norm.  L.A., New York, Chicago, Detroit, besides being well-exploited by other crime writers, are practically used to horrible crimes happening.  I wanted my characters to be unprepared to grapple with what was going on.  I went to school in the midwest–University of Michigan–so was familiar with the area.  Indianapolis is very middle class, with great public works, lots of sports, etc, but around the edges there are also very depressed areas with high crime and murder rates, as well as heavy drug traffic and other nasty stuff that is appealing to a crime writer.  I wasn’t thinking too much about creating a series when I wrote the first book, but did want to leave the possibility open of further crimes for Frank Behr to tackle, so I chose Indy.

You’ve obviously done some incredible work in the film industry (the 500 fights scene in Knockaround Guys is the ultimate tough guy moment of all time).  Will you continue to write screenplays and novels or do you feel yourself drawn more to writing books?

Thank you!   I am at work on the fourth book in the Behr series, but I have continued writing screenplays and will also be more focused on directing them as well.  I co-directed Solitary Man with my filmmaking partner Brian Koppelman about a year back and it was well received.  We’re gearing up to direct another movie now, called The Game, based on Neil Strauss’s book,  and we’re in the process of adapting City Of The Sun, which we also plan to direct.

What kind of research did you do for the new book?

I’ve spent a decent amount of time in the city and have developed some very generous police (and various other) contacts.  I also regularly read the Indy newspapers on line.  I followed the story of of racinos (racetrack-casinos), and the tax and licensing fees they were assessed upon opening.  There was a hue and cry by certain sectors complaining that the racinos got a sweetheart deal. But that was during the bull market.  When the (first) recession hit, and gambling money dried up, the racino owners began complaining the fees were too high and they were going to go under, and the people who didn’t like the fees in the first place said “tough sh*t.”  It struck me as a great conflict.  I also knew that replacement senate seats were granted by gubernatorial power, not special election.  The combination seemed like an ideal set up.

Are there any stories or experiences that you’d like to share from your work in the film industry?

Of course!  But they’d go over better after a few drinks…

What are you reading now?  What are some of your favorite books/authors and who has had the greatest influence upon your own work?

I just finished a great book, not a crime story, by Chad Kultgen called Men, Women and Children.  it’s a haunting, but at times funny portrait of the sexual  loneliness and confusion of suburban America, and especially American youth. I also just read A Drop Of The Hard Stuff by longtime favorite Lawrence Block.  It’s great to read Matt Scudder again, and especially to go back to when he’d just gotten off the sauce.  I’m now in the middle of a brilliantly written book about crime, recovery and redemption set in Southern California, by Indianapolis author Dan Barden.  It’s called The Next Right Thing.  I snagged it in galley form, but look for it in March.

My greatest literary influences would be Hemingway, Fitzgerald, and though I discovered him a little later,  James Salter.  All different writers of course, but they share the clean prose with much left unsaid that I aspire to and fall short of daily.

What’s something that you’ve learned about the publishing business that you weren’t expecting?  Do you have any advice for aspiring (or struggling) writers out there?

My advice is always: write, write often and write a lot.  Write what you give a shit about, not what you assume “they” will like.  Beyond that, especially if you are young, look for ways to use technology–even beyond social networking sites–to find and gather readers.  Blogs, digital web features, whatever the next way is to reach potential readers who are immersed in TV, movies, video games, etc.  There must be a 2.0 version of the book and publishing business, and some young writer with a bit of Mark Zuckerberg spirit will find it I hope.

Are you currently working on a new book? Can we get a sneak peek?

As I mentioned, I’m working on the fourth in the Frank Behr series.  I’m sorry, this is no fun, but I never really talk about the work in progress, as that seems to let off the pressure that makes me write it. But suffice it to say Frank Behr will be dealing with some guys no one would ever want to meet. 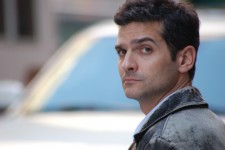 David Levien is the author of WHERE THE DEAD LAY and CITY OF THE SUN. He has also co-written the films “Rounders,” and “Ocean’s 13,” and co-directed “Solitary Man.” He lives in Connecticut.