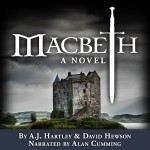 Or are they? Above all, the plays of Shakespeare are thrillers. Life and death. Passion and hated. Drama . . . terror. What’s not to love for thriller readers? So why shouldn’t these thrillers of old take on new life and, in fact, be reimagined in a new form that’s both familiar and alien to readers?

Professor of Shakespeare A.J. Hartley and thriller author David Hewson have done just that with a new novel that not only picks up the narrative of the play but turns it on its ear to make it into something unique and fresh. For Macbeth wasn’t just a character, he was a man. A real-life king who ruled the throne of Alba for seventeen years. Surely he was more than a bloodthirsty menace who met his comeuppance in a few short acts on a stage. He had a love of country that drove him to perform acts of extreme heroics and, perhaps overreaching pride. But so compelling is the portrait created by the master playwright that history has nearly forgotten the true Scot who tamed a country. 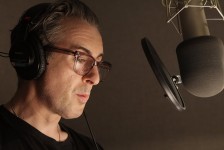 It’s taken two other masters of words and a lot of painstaking effort to take on the challenge of giving voice to Macbeth, one that steps beyond the stage. Yet, how could a tale of a man larger than life be portrayed without real emotion behind the words, inflections that can only be heard. Not read. So Hartley and Hewson took an extraordinary step and partnered with Audible.com to create the very first audio-first release of a full-length novel. Not in conjunction with a hardback or paperback release.

Instead of a paper release.

Then, once you’re so far inside the world that you can’t get out again, drop by Audible.com to find out how you can own the whole story. Read a Macbeth that’s bigger than Shakespeare, wilder than the Highlands and deeper than the lochs.

If you want to go even further, drop by David Hewson’s blog, where he’s detailed his extensive visit to Scotland to learn more about the former King of Alba. It’s an amazing journey.

And if you’re on your way to New York for ThrillerFest, make sure you drop by the panel that both A.J. and David will sit on. In his words: “Ignore the formal panel title which is, ‘What’s First, The Chicken or the Egg?’ No chickens, no eggs. I promise. With a group like this we can talk about one thing and one thing alone. Where the hell is publishing going? What does the digital revolution mean for authors and publishers, but most of all for the people who pay our rent — readers?”

Now, go listen to a good book. It’ll be worth the time.