Bill Cameron is the author of the dark, Portland-based mystery series featuring ex-cop Skin Kadash.  His latest book, County Line, puts Skin in one of his toughest situations yet.

When the steadfast Ruby Jane Whittaker drops out of sight, Skin sets out to discover what drove her to leave her life behind so suddenly and without explanation.

The discovery of a dead man in Ruby Jane’s apartment and an attack by a mysterious stalker sends Skin from Portland to California and into a charged encounter with her one-time love, Peter McKrall. As questions mount, and answers grow increasingly out of reach, Skin and Peter cross the country on a desperate journey deep into Ruby Jane’s haunted past, and toward an explosive confrontation which will decide their future.

Tell us about your hero, Skin Kadash.  What does he do and how does he do it?

At his core, Skin is a cop. Depending on where you’re at in the series, he may be working, or he may be retired, but at any point he’s a man with a deep integrity and a strong sense of justice. He’s also practical, sometimes cynical, but ultimately idealistic. Though he worked for nearly three decades in law enforcement, his view of justice is not bound in law. There are times when what he believes is right may not be what is strictly legal. This grows out of his natural suspicion for authority for the sake of authority.  In the end, Skin is a dogged, wily, wry, self-effacing, and ultimately a man you can count on.

Skin has appeared in three previous books, Lost Dog, Chasing Smoke, and Day One as well as the short story, “The Last Ship”.  What do you like the most about writing a serial?

Once I realized I was writing a series (Lost Dog started out as a standalone), I came to appreciate the opportunity to tackle different themes and emphasize different characters in each tale. The novels tend to feature broad, life-changing events, while the short stories zero in on narrow, discrete moments. “The Last Ship” is the story of Skin’s recovery from the injuries he suffered in Day One. “Sunlight Nocturne,” which will appear in Anne Frasier’s Deadly Treats anthology this fall, explores Skin’s softer side through his relationship with the neighbor boy Danny, also from Day One. My contribution to Portland Noir sees Skin adjusting to life after he left the Portland Police Bureau in Chasing Smoke. While the series follows a long arc, each story ultimately stands on its own.

What elements do you feel make a great mystery?

What makes a great mystery is also what makes any great story: complex, vulnerable characters facing a high-stakes problem. It’s never as simple as “there needs to be a crime,” though certainly that’s an important ingredient. My stories tend to feature domestic troubles which explode into the criminal. But to me, the success of the story grows out of character first. The nature of the crime itself is, I think, less critical than the people caught up in it.

County Line is Skin’s fourth outing.  What do you do to keep things fresh while still maintaining the essence of the character that your readers have come to know? 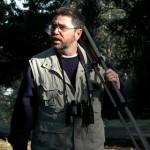 They’re all Skin Kadash books, but each also has its own focus. Lost Dog was about Peter McKrall, with Skin as a significant but supporting character. Chasing Smoke was purely Skin’s story, the one in which he was forced to come to grips with both his mortality and his place in the world as a cop, a partner, and a friend. Day One saw Skin as the pivot point around which other stories orbited; he was the thread which tied the struggles of Ellie, Eager, Big Ed, and Shadow together. And in County Line, I turn my attention to Ruby Jane Whittaker, Skin’s friend and developing love interest. To this point, Ruby Jane has been an important character, but this is the first time she takes center stage.

Skin hails from Portland, Oregon.  In this story he makes his way to California. Would you consider him to be a “fish out of water” or is he able to adapt?

I believe where we are and where we’ve been form an important element of our identity, both for good and ill. Outside of Portland, Skin is definitely a fish out of water—a great opportunity for me to explore new aspects of what makes him tick. As a matter of necessity he must adapt if he hopes to succeed.

Of course, for a Portlander, San Francisco isn’t much of a stretch. The real challenge for Skin is when his search takes him to rural Ohio in the company of his one-time friend and now rival for Ruby Jane’s affections. That’s a fish out of water with the filet knife at his gills. As the story moves back and forth across the country, I hope the places all the characters find themselves provide new understanding of how and why they became who they are.

Bill Cameron is the author of the dark, Portland-based mysteries DAY ONE, CHASING SMOKE, and LOST DOG. His next Skin Kadash mystery, COUNTY LINE, will be released in June 2011. His stories have appeared in KILLER YEAR, PORTLAND NOIR, and the 2010 ITW anthology FIRST THRILLS. LOST DOG and CHASING SMOKE were both finalists for the Spotted Owl Award for Best Northwest Mystery. Cameron lives in Portland, Oregon, where he is currently working on a young adult thriller.