David Hewson’s latest Nic Costa thriller examines mysterious links between a real-life centuries old crime involving incest and murder in Rome and a present day dead body practically dropped at his hero’s feet. THE FALLEN ANGEL landed a starred review from Publisher’s Weekly: “Readers will have a lot of fun peeling away the book’s many layers, right down to the final, closing twist.”

But even bigger news for the author is that the acclaimed series is moving from print to television. Bavaria Studios has bought eleven of his crime novels for a feature length English language TV series set in Rome.

In FALLEN ANGEL, Nic Costa is about to embark on his ninth adventure. What do you think is his appeal for readers?

The fact he’s different – young, sincere, a bit naive, definitely not cynical. Not Hollywood casting. The fact he lives in Rome helps. Not many places where your protagonist can spend a large part of the book riding round on a Vespa as he does in this one.

How much research do your books require? 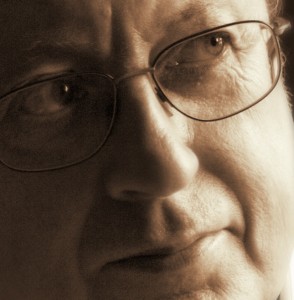 Lots. I could spend a year on research if I had the time. But I try to compress it into a couple of months, taking an apartment in Rome in the area I’m writing about. For FALLEN ANGEL I had to look into a real-life tragedy, the execution of a young noblewoman, Beatrice Cenci, who was executed at the end of the 16th century for her part in the murder of her father who’d been abusing her. Since it’s Rome the history is still there on the streets, even four centuries later. I got to see where Beatrice lived and died, and even the sword used to behead her which now lives in the Ministry of Justice’s black museum.

Give us the details on Nic Costa and this TV deal.

It’s a massive undertaking which is being masterminded in Rome right now. Very exciting and, since I know nothing at all about TV, an eye-opening process for me. Scripts, budgets, schedules, talent… all those things I do in my head now have to be handled by real people in real teams.

Still struggling with that concept, and the fact that I get asked twenty times a day, ‘Who will play Nic Costa?’ Honest answer: too early to say.  I’d expect it to be someone plucked from the ranks, not some megastar with a hankering to be based in Italy for several months of the year. But who knows? Not me, that’s for sure…

How do you think your protagonist has changed over the years?

Nic Costa is a bit less naive than he used to be, and shows a distinctly sharp side to his character in this story. But the main change has been in the development of the ensemble cast of characters around him – Peroni, Falcone and particularly Teresa Lupo. They’ve grown over the years to the extent I now feel I write with a cast, not a single protagonist. Also being Roman it’s hard to say no to them.

Besides the Costa series, you’ve written numerous standalone thrillers. Is one easier than the other? Is one more rewarding?

I think they both have their advantages and drawbacks. Series books are, in theory, easier to use since you have a recurring cast. But you have to be very careful not to get stuck in a rut – I try to write standalone books with the same characters, not a standard procedural template with each book. That way I stay fresh. Standalones should exercise different parts of the imagination. The trouble is you always get people coming back and saying, ‘Will you make a series of that too, please?’ Very tempting to bar yourself from the latter by offing your protagonist at the end…

JK Rowling knew how the Harry Potter series was going to end. Charlaine Harris knows how her Sookie Stackhouse series will end.  Do you know how your series is going to end?

Not at all. These are continuing stories and I don’t feel myself stumbling towards the Reichanbach Falls just yet. That said I will pause and do something different from time to time. Next year’s book is Teresa Lupo on her own in Venice during the carnival. The book for the year after that will be a standalone set in Florence in 1986. After that I’ll see what Costa and his colleagues are up to.

Having spent your career as a journalist, do you ever miss the world of news?

If I did I’d be missing something that no longer exists. It’s twenty years since I was a news reporter on the London Times. Back then there was no internet and no cellphones. We did this thing called ‘going out on stories’. When it was my turn I used to come into the office carrying my passport, never knowing where I’d get sent. Reporters seem terribly office-based these days, staring at computers, hacking out copy. Not my idea of fun…

The Last of the Good Guys by Ernesto Patino

The Trial by Larry D. Thompson