Bestselling criminologist R. Barri Flowers delves into the dark world of prostitution in his latest book, Prostitution in the Digital Age: Selling Sex from the Suite to the Street, where he tackles the commercial sex trade industry and its influence on society. Flowers is known for exploring crime and legal issues in his work, covering topics such as murder, female crime, sex crimes, and more. He also writes crime fiction (Murder in Maui and Justice Served), teen mysteries (Danger in Time and Ghost Girl in Shadow Bay), and true crime (The Sex Slave Murders).

Why did you choose to write about prostitution?

As a criminologist, I write about various aspects of criminality, to shed light on for the public and academic community. With prostitution often referred to as the world’s oldest profession, I wanted to examine its state in the modern age. Exploring the various facets of the sex trade industry allowed me to gain some perspective and share with my readership.

You’ve researched prostitution on a vast scale? How did you research the topic so extensively? What types of experts did you consult?

Yes, I have researched the sex trade industry comprehensively. Having been a criminologist for a numbers of years now, I have written several books on the subject matter, including Street Kids, Runaway Kids and Teenage Prostitution, and The Prostitution of Women and Girls. In the process, I have culled information from other sex crime experts, law enforcement, government data, and participants in the sex trade, including prostitutes, pimps, and johns.

What did you learn from your investigation?

A number of things. For one, the commercial sex trade industry is big business, raking in more than $100 billion worldwide annually. In the U.S. alone, $14 billion a year, or $40 million each day, is generated from the sex-for-sale business. Most of the profits go to pimps, pornographers, organized criminals, and others sexually exploiting mostly women and children.

I also discovered that earnings by prostitution-involved females can vary considerably. On the one hand, you have the super elite sex workers who cater to very wealthy men and can earn as much as half a million dollars a year. On the other extreme are streetwalkers and teenage prostitutes who often get very little for their services. Sex trafficking and runaways turning to survival sex on the streets are big problems in this country.

I learned that violence and substance abuse are endemic in the sex trade, at all levels, and that males are well represented as prostitutes in the industry.

Use of the Internet, cell phones, and other digital technology has become an important part of the sex-for-sale business, as well as law enforcement in cracking down on prostitution.

In the book, you talk about prostitutes being murdered. Is that a big problem?

Every life lost to crime is a big problem. Prostitutes have long been the targets of killers, particularly serial killers. Monsters like Jack the Ripper and Gary Ridgway, also known as the Green River Killer, are notable examples. Prostitutes tend to be more vulnerable for victimization than others because of their accessibility and placing in danger by the nature of their business.

Would crime novelists find your book useful in writing their mystery fiction?

Absolutely. As many mystery and thriller novels today tend to involve high class call girls, brothel sex workers, streetwalkers, sex trafficking, and/or pimps, Prostitution in the Digital Age is an excellent resource for accurate information on the sex trade industry today to give crime novels greater credibility. The book is available at popular booksellers such as Amazon and Barnes & Noble, as well as many college and local bookstores, and libraries across the country.

In addition to those concerned about prostitution and crime novelists looking to obtain accurate information for their books, why would Prostitution in the Digital Age appeal to a wide variety of readers?

This book will appeal to a broad spectrum of readers because, frankly, it explores an industry that affects us all in one respect or another, often piquing the interest of everyone from college students to law enforcement to social scientists to the general public.

The people involved in the sex trade industry are in many instances our family members, neighbors, colleagues, and others who may come and go in our lives. These include runaways and throwaways, the women and men who are sexually exploited, the men and women who pay for sexual favors, and the pimps, madams, gang members, pornographers, and organized criminals who control the sex-for-sale industry.

Given that there is a high incidence of sexually transmitted diseases among prostitutes and the males they service, who then place their partners at risk, it is a vicious cycle that no one can afford to ignore.

Prostitution in the Digital Age explores all the angles that will hopefully spark debate and lead to more effective ways to reduce commercial sexual exploitation and its often devastating consequences for those most susceptible to victimization.

According to your bio, you also write crime fiction, thrillers, and young adult mysteries too. Can you tell us a little about these? 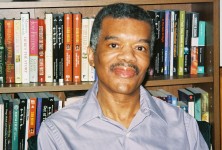 Yes, I do write adult crime fiction and teen mysteries as well. I enjoy using my knowledge as a criminologist and creative spirit to carve out entertaining mystery and suspense novels. My latest adult mysteries are the highly acclaimed eBooks, Murder in Maui: A Leila Kahana Mystery, Dead in the Rose City, State’s Evidence, and Dark Streets of Whitechapel. The last title combines fact and fiction in writing a tense tale about Jack the Ripper and a NYC cop who crosses the Atlantic in pursuit of a prostitute’s killer in 1888.

On the young adult side, I have two new great mysteries out in eBook and print. Ghost Girl in Shadow Bay is a haunted house mystery, and Danger in Time is a time travel mystery.

All these titles are available in Kindle and Nook.

Do you have any new books coming up?

Yes, this spring, my bestselling true crime book, The Sex Slave Murders, will be released in Kindle and Nook. Also, a top selling legal thriller novel, Persuasive Evidence, will be in eBook this summer, along with a mystery anthology I am editor of, Murder Here, Murder There, featuring stories by bestselling mystery authors.

How do readers learn more about you and your writings?

Janice Gable Bashman
Janice Gable Bashman is co-author (with NEW YORK TIMESbestseller Jonathan Maberry) of Wanted Undead or Alive, nominated for a BramStoker Award. Her short fiction has appeared in various anthologies, and she haswritten for leading publications, including NOVEL & SHORT STORY WRITER'SMARKET, THE WRITER, and WILD RIVER REVIEW.

Visit her website/blog at www.janicegablebashman.com and find her on Twitter(janicebashman), Facebook and LinkedIn.

Lessons in Trust by Charlie Cochrane

Hitched and Hunted by Paula Graves