Harlan Coben has been topping the bestseller lists at least since his first standalone thriller, TELL NO ONE, rocketed up the charts. But before that novel came out and propelled Harlan into the upper tiers of international bestsellerdom, he was the author of a series of well-loved mystery-thrillers featuring wisecracking Myron Bolitar, sports agent. Myron’s back! And Coben indicates it’s for last time . . . maybe.

Coben says, “It’s really an old-fashioned Myron novel with a client coming in that needs help. Then it quickly spins out of control and involves his brother, who he hasn’t seen in fifteen years. It leads to plenty of murder and mayhem, but it’s a more emotional Myron.”

In LIVE WIRE, the client is tennis star Suzze T. She and her rock star husband, Lex, come across an anonymous Facebook post questioning the paternity of their unborn child. Lex takes off and Suzze, who is eight months pregnant, asks Myron to save her marriage. All of which sounds like classic Coben, actually, with an emphasis on familial tensions and how past lives never stay in the past.

In early March Coben will travel to France and Germany to promote last year’s U.S. delivery, CAUGHT, then return to promote LIVE WIRE around March 22. Coben reminisces about how things have changed since he was starting out in the early ‘90s, driving around with fellow writers and visiting bookstores where sometimes people even showed up to hear them talk and buy books. “That’s very different now than it was in those days. We were paying on our own, we were driving in my Volvo—a very different kind of circumstances. In a way I miss those days, but it’s very, very different now. A different type of joy.”

Paraphrasing a Dan Fogelberg tune, Coben says, “The audience is heavenly, but the travel is hell. The actual events are fun. Any author that complains about people standing in line to get your autograph because they like your book needs to have their head examined. Seriously. Bombing out and all that stuff is no fun, but I enjoy the readers.” 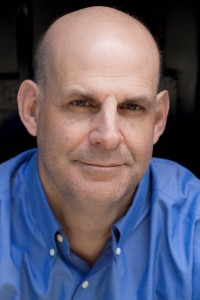 Above all, Coben focuses on the books and the readers. Particularly with a publishing industry going through a slow-motion implosion as e-books take off and Borders declares bankruptcy. “I try not to let the industry touch me in terms of what I do. The crazier it gets the more I worry about it—e-books, stores going under, but there’s not much a writer can do or should do about it, so I just try to keep my head down and write the best book I can. If the book is good, I personally think it will take care of itself.”

Meanwhile, as LIVE WIRE goes live, Coben is putting the finishing touches on his first thriller for young adults titled SHELTER, which will be released in September 2011. He notes that Myron Bolitar will make an appearance in the book because the main character is Myron’s nephew, Mickey Bolitar. “I’m pretty excited about it. I’m going to try two books a year.” Coben notes that with four kids ages 9, 11, 13 and 16, writing for that age group come natural.

Otherwise, Coben could almost be a character in one of his books. A stay-at-home Dad with a bunch of kids that lives in the suburbs and spends his days writing at a nearby coffee shop. “I don’t do much else. I recently took up golf, but I don’t do much of that in the northeast in the winter. I’m not good with hobbies. If I’m doing that I’m not writing. I write in the coffee shop because I like the background noise, plus I find excuses not to write, so if I’m at home there’s always something else to do to avoid writing. Even vacuuming.”