I have the distinction of being a writer who decided the world was ready for a funny story…in the year of Stieg Larsson.  Okay, I was a bit off (timing never was one of my best things).  But, being part hambone and part funny bone, it’s what I do.  Don’t get me wrong, I firmly believe in death and dismemberment—I simply can’t live there.  And since, as a writer, I pretty much live in my story…well, you get the picture.

I didn’t start out wanting to write funny.  No, I wanted to be Sandra Brown.  Seriously, who wouldn’t?  But some wise soul along the way told me, “We already have a Sandra Brown, and she’s doing quite nicely.”  Good point.  So, now I simply lust after her clothes on the off chance that someday I might make my body tiny enough to fit in them.  And I have resigned myself to just being me.

After turning in the manuscript for my first novel, Wanna Get Lucky?, post-partum panic set in.  Did I have another story in me?  One that was as good?   If I did, I needed to find it pretty quick—the publisher was talking series here.

My protagonist, Lucky O’Toole, is a woman in her early thirties, who works as the Chief Problem Solver for the Babylon, Las Vegas’ most over-the-top Strip casino.  So, I knew where to start looking.  As a strong proponent of the leap-before-you-look school, I jumped right in, roaming the alleys of Vegas for my next tale—sorta like Diogenes searching the streets for an honest man (don’t try that in Vegas.)

But, my job was way easier.  If you can’t find a story in Vegas, you’re passed out under a bridge.

As luck would have it, fight weekend was fast approaching—Oscar de la Hoya’s last fight, to be more specific.  Even those of us who really don’t get the beat-them-to-a-bloody-pulp thing were captured by the hype and excitement.   Being an opportunist, and, in the interest of full-disclosure, fueled by several cosmos, I decided then and there that Lucky Stiff, would be set during fight weekend.  Lucky would have a field day with that—the Hollywood crowd, the gamblers, the hookers…. 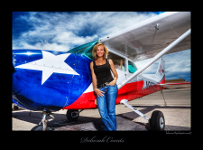 Of course I didn’t actually know anything about the fight game….  But that’s the fun of this biz, isn’t it?  Learning something new.  Meeting new people.  Making new friends.  One research dinner stands out:  My fight game/oddsmaking expert and I were dining at an old Vegas establishment surrounded by the likes of Steve Lawrence (minus Edie), Jerry Lewis and sundry pro-athlete types.  My expert commented on the recent elections.  Without thinking, I asked him who he had voted for—I know, really dangerous ground when talking with someone who counted Sammy the Switchblade and Lenny the Slicer among his friends.  In response to my question, my new friend waved his hand and said, “Hell, I’m a felon.  I can’t vote.”  My mother would be so proud.  I’m just grateful he let me live.

Okay, so if it was going to be fight weekend, I needed an oddsmaker.  The name Numbers Neidermeyer popped into my head—I must’ve been late taking my meds that day.  But Numbers wasn’t your run-of-the-mill number-cruncher.  This oddsmaker was a petite, strawberry blond, female. And nasty to boot.  The moment I met her, I decided to kill her.  But how?

Mandalay Bay, one of my favorite Vegas hotels, has a great attraction, Shark Reef.  Among its many displays is a huge tank filled with sharks of all shapes and sizes…including a Tiger Shark.  Perfect!  But, if that didn’t lend itself to my story, I’d heard they also had a school of Piranhas in a tank fronted by only a half piece of glass.  I needed to see that.

Now an old hand at this research gig, I knew I needed to con someone into going with me if for no other reason than to post bail or call the paramedics.  I bribed my son with food.  At twenty-three, he should’ve known something was up, but he willingly agreed.  Men really are so simple.

And, trooper that he is, my son didn’t even roll his eyes when I approached the guard at the shark tank and casually asked, “If I threw a dead body in there, would the sharks eat it?”

The guard on the other hand looked at me wide-eyed, clearly caught on the fence.  I could hear him asking himself, “Should I call security? Or 911?  Security?  911?”

I put a reassuring hand on his arm.  He flinched.

That decided it for him—911.  But, being young and overly curious, he granted me a moment to explain.  When I had finished my spiel, he nodded and thought for a moment.  “If you flip on the overhead lights before you toss the body in, that should do the trick.  The lights mean feeding time and when they go on, the sharks will hit anything that hits the water.”

Cool.  So ended the short, sweet life of Numbers Neidermeyer.

Next, I needed a suspect.  Who better than the Beautiful Jeremy Whitlock?  As Lucky’s assistant’s main squeeze, he was the last person to see ol’ Numbers walkin’ and talkin’—making him suspect Numero Uno.   And Lucky is drawn into the intrigue.

Murder in place, I began fleshing out the story, so to speak.

Thanks to Lucky, Teddie, her live-in, is off in California chasing his music dream.  Something Lucky feels really conflicted about.  Mona, Lucky’s mother, decides to use her bordello in Pahrump as the platform from which she auctions a girl’s virginity.  This is not happy news to our heroine whose goal in life is to right wrongs—although her lot in life seems to be pulling Mona’s keister out of the fire.

So far, so good.  Now for some secondary characters.  Another aspect of Vegas that I wanted to add to the story was the distinction between ‘Strip hotels’ and ‘Local casinos.’  To me, the concept reeked of some vague segregation—we wouldn’t want to run off the paying tourists by having them mingle with the local riff-raff, now would we?  Thankfully, that’s not the case.  As far as I can tell, the two terms are meant merely to distinguish the location of the properties—the off-strip or local ones catering to the…locals.  Rumor has it the food and alcohol prices are lower, the slots looser, the odds better, but you couldn’t prove it by me.  Anyway, this is a long-winded explanation of the genesis of Darlin’ Delacroix, Lucky’s ‘aunt,’ and the owner of a local casino.  Darlin’ is a throwback to an earlier time of razzle-dazzle and Vegas kitch, and one of Lucky’s ‘relatives’ who inspires her to drop to her knees every night to thank the powers-that-be that the two of them don’t share the same DNA.

Just for giggles, I added Jordan Marsh, a Hollywood heartthrob and friend of Lucky’s, who has a very large secret—one that could torpedo his career.  Of course, he asks Lucky’s help in…well, you’ll have to see for yourself, but it’s not what you might expect.  Then I filled out the story with young Detective Romeo making a curtain call, and with the introduction of Daniel “Lovie” Lovato, the District Attorney, his wife Glinda, their daughter, Gaby, and Glinda’s father, Jimmy G, a local restaurateur and friend of the Big Boss.  And then there’s this French chef who seems intent on complicating Lucky’s life…

So, how to get it all started?

Well, there’s this eighteen-wheeler filled with millions of honeybees that jackknifes on the Strip in front of the Babylon spilling its load…

Deborah Coont’s mother tells her she was born a very long time ago, but Deborah isn’t so sure—her mother can’t be trusted.  These things she does know:  Deborah was raised in Texas on barbeque, Mexican food and beer. She currently resides in Las Vegas, where her friends assure her she cannot get into too much trouble.  Silly people. She is the author of WANNA GET LUCKY? (A NY Times Notable Crime Novel for 2010) and its sequel, LUCKY STIFF (coming February 15, 2011), and can be reached at www.deborahcoonts.com.