When Publishers Weekly compared Mary Burton’s new release, Senseless, to Stieg Larsson’s work, she’d only just discovered the Swedish author. She’d been too busy writing back-to-back thrillers scheduled to publish in January and February. “But afterward, I read The Girl With the Dragon Tattoo,” Burton says, “and I’m humbled by the comparison.”

Burton may be one of the hardest working writers in the business, crafting 22 novels since her debut in 2000. “I’ll put my next manuscript in the mail tomorrow,” Burton says. “Then I’ll take Saturday and Sunday off, and starting researching my new book on Monday.” With dedication like that, it’s no wonder she’s produced a string of bestsellers, transitioning from romance to cutting-edge suspense.

In Senseless, Eva Rayburn, a convicted felon, becomes a suspect in a grisly murder, yet Eva still bears the scars of a similar assault ten years earlier. While Detective Deacon Garrison races to solve the current crimes, Eva tries desperately to remember the details of that earlier fateful night. Crime journalist Connor Donovan covers the story, putting Eva in the spotlight and in danger.

The idea for the novel originated with a young college woman the author had known who simply vanished. “I wondered what had happened to hear,” Burton explains. “So I tried to answer the question and fill in the story.” She adds, “My plots often start with a simple object, or scene, or picture. Then every time I get an idea, I add it to the file. Eventually they all connect.” 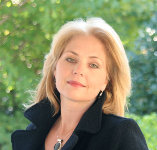 Yet character is the most important—and most challenging—aspect of every story, Burton says. “I feel I have to really get to know the characters and what drives them before I start writing, or the plot falls flat.”

No one has ever described Burton’s work as flat. Library Journal calls Senseless, “A fast-paced thriller with a touch of romance. With hard-edged, imperfect but memorable characters, a complex plot, and no-nonsense dialog, this excellent novel will appeal to fans of Lisa Gardner and Lisa Jackson.”

Publishers Weekly says, “Stieg Larsson fans will find a lot to like in Burton’s taut, well-paced novel…Burton surrounds her appealing protagonist with a strong supporting cast.”

The companion story, Merciless, releasing next month, features all the same characters, including Eva’s sister, Angie Carlson, a high-profile, high-priced criminal attorney. In the first book, the sisters are estranged and slowly begin to reconnect. “They are like night and day, and there’s a lot of emotion in their relationship,” Burton says.

Her stories take place in Virginia where she lives, and Burton says setting details are critical to the plot: “They determine how people act, how the crime is committed, and the condition of the body.”

After writing several romance novels set in the West, Burton decided to try a “bigger story idea” with a contemporary suspense element, set in her home state. The result was I’m Watching You, released in 2007. Two more bestselling thrillers, Dead Ringer and Dying Scream, were released in 2008 and 2009.

Burton credits her early success to a critique group she worked with while writing her first novel. “We met weekly and I had a goal of writing 20 pages before Friday,” Burton says. “That kept me motivated, and I always recommend that new writers find someone they trust with their work.”

Burton’s current novels are typically labeled romantic suspense, and she’s content to write in the genre. “There’s justice served at the end of the story, and yet the relationship that emerges gives readers a sense of hope,” Burton explains. “That’s very satisfying for me.”