“Moving from room to room, hearing their stories…we writers of invented action were humbled by meeting warriors who had lived the real thing, examples of heroism far beyond anything we could imagine,” says David Morrell. For Morrell and the other thriller writers (Steve Berry, Andy Harp, Douglas Preston, and James Rollins) who participated in the recent Operation Thriller USO Tour, the tour was a life-changing experience. It brought them face-to-face with wounded military personnel at hospitals in the United States and with personnel stationed in Kuwait and Iraq. This was the first time in the USO’s 69-year history that authors visited a combat zone, and it was a huge success for both the authors and the men and women they visited. 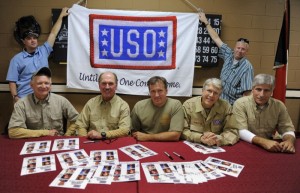 “It was an incredible honor and thrill to meet face to face the writers that have given me so much pleasure reading for many years,” says Staff Sergeant David Thomas, Brigade Chaplain Assistant for the 3rd Brigade Combat Team, 4th Infantry Division. “I talked to all them for so long, about different ideas, and the genuine interest they had for myself as well as the other Soldiers, Sailors, Marines, and Airmen was amazing and humbling. I’ve met celebrities during other USO tours, but none have been so genuinely interested in talking to soldiers, and so curious about how they live and work in such places and under crazy conditions.”

The tour kicked off with visits to the National Navy Medical Center and Walter Reed Army Medical Center where the authors—the ones used to telling the stories—listened with genuine compassion and understanding as the injured related what had happened to them during combat. Men and women whose body parts were shattered but whose spirits, courage, and determination were so great that they only wished they could rejoin their units. “The men and women in our armed forces are amazingly motivated, polite, considerate, disciplined, and generous,” Morrell says. “These characteristics were especially strong in the wounded military personnel that the group visited at Bethesda and Walter Reed hospitals. They are an inspiration.”

Camp Arifjan, a huge military base in Kuwait, was the next stop on the tour. It was here that—in addition to the meet and greet where the authors handed out Operation Thriller T-shirts and signed posters and loaded ammunition magazines—the authors learned that in order to meet US agricultural restrictions, a tank shipped back to the United States must first be disassembled, cleaned, and reassembled in a 20 hour process to ensure that foreign soil does not enter the United States. A visit to a nearby base later in the day taught the authors how U.S. boats protect oil platforms and the harbor in the Arabian Gulf and gave them a taste of the thrill of speed as they zipped through the water on boats. “The chance to meet with our armed forces was the bigger thrill,” says James Rollins. “Their generosity and commitment are inspiring.”

Day three brought more new experiences as the authors boarded a C-130 Hercules transport plane that took them to Sather Air Force Base in Baghdad. “Traveling in a C-130 is a world-class experience, like being in a giant flying warehouse,” Steve Berry says. At Sather Air Force Base, the authors dined and talked with soldiers, engaged in the custom of driving golf balls into the lake, and spent the night in the library of Saddam Hussein’s former hunting lodge, a place that couldn’t be more appropriate for five authors to rest their weary bodies.

The city of Mosul was the stop on day four of the tour, which began with another plane trip and was followed by a two hour meet and greet. Next, the group donned body armor to get a feel for what it’s like for the troops to carry more than eighty pounds of additional weight while out on missions. They also explored Mine Resistant Armored Personnel carriers (MRAPs) and saw a demonstration of how robots help explosive experts inspect and disarm explosive devices. Another meet and greet and a visit to the personnel on the airport’s flight line ended the day. “As always,” says Douglas Preston, “we learn a great deal from all of the amazing and dedicated people we meet.”

The next morning, the group flew to a former Iraqi military base in an undisclosed location that is now operated by joint forces. Most of the day was spent meeting and greeting military personnel, who brought their own books for the authors to sign, and ended with a Veteran’s Day BBQ for both the authors and soldiers, complete with all the fixing of home—chicken, steak, ribs, etc. The authors also saw a demonstration of the fire trucks that protect the flight line.

On its last day, the tour wasted no time getting started when the thriller authors hopped on another C-130 to Basra. The flight took them over what appeared to be an endless desert and over giant oil refinery fires. Once they landed and got settled, they met with the explosive ordnance division, and Douglas Preston experienced what it is like to wear a bomb suit. Later, they visited a base hospital and then ended the day with a meet and greet. “To talk to David Morrell, who is my favorite writer of all time, was incredible,” explains Staff Sergeant David Thomas. “I was talking to the person who first inspired me to write the type of stories I enjoy, and the fact that he showed so much interest in what I do in the Army was truly an honor.”

What began as an idea to support the troops turned into something much more. It not only gave five thriller writers the opportunity to express their gratitude to the men and women who serve our country, but left them emotionally touched by the countless troops they made contact with during the tour. This is one USO tour that both the military personnel and the thriller authors who met them will never forget.

“I was most impressed with the ability of the human spirit to rise to the occasion it faces,” says Andy Harp. “I saw it on both sides of the tour. On the military side, I saw and met young men and women who a year ago were probably struggling to get through high school but now ran, with a surgeon’s degree of professionalism, million dollar pieces of equipment because other lives depended upon them. It may have been driving an MRAP, or working an EOD [explosive ordnance disposal] robot, or being a crew member of a cargo aircraft. They did it well.

“I saw four civilians and fellow authors forget about the bed they slept in, the time they had to grab something to eat, the discomfort of living out of a suitcase and changing addresses every night, meet, sign, talk to, laugh with, and ease the day of others every day for the tour.”

Steve Berry adds, “It was the determination and dedication of every one of those men and women that I found remarkable. This was my first experience being in their environment. I felt honored to be there. We’re lucky to have those men and women protecting us.”

And on Larry King Live:

Operation Thriller: It All Started with a Conversation by Andy Harp

Operation Thriller: We Met the Real Heroes by Douglas Preston

Operation Thriller: There and Back Again by James Rollins

Janice Gable Bashman
Janice Gable Bashman is co-author (with NEW YORK TIMESbestseller Jonathan Maberry) of Wanted Undead or Alive, nominated for a BramStoker Award. Her short fiction has appeared in various anthologies, and she haswritten for leading publications, including NOVEL & SHORT STORY WRITER'SMARKET, THE WRITER, and WILD RIVER REVIEW.

Visit her website/blog at www.janicegablebashman.com and find her on Twitter(janicebashman), Facebook and LinkedIn.