At first, they look like suicides. Two bodies within a week—one found floating in New York’s East River, another electrocuted in the bathtub. But forensics show that the victims were drugged, then killed. As the death toll grows, so does the brutality of the murders—and the killer dubbed the Flesh Collector continues to prey.

Her first novel, SILENT SCREAMS, introduced us to Lee Campbell, a criminal profiler with his own set of demons, tracking a serial killer in New York City, set against the backdrop of 9/11. Now he’s back, along with NYPD detectives, in SILENT VICTIM, hunting a new killer—and the clock is ticking.

The Big Thrill contributing editor, Christine Goff, caught up with Lawrence and asked her a few questions:

Q: There are those who would say that serial killers and criminal profiling have been done, but clearly you’ve done it better than most. What drew you to write these stories? Did you start with character or plot?

A: Thank you for your kind remark.  I have a fascination with pathopsychology – as an actor and playwright, I was always drawn to pretty dark stuff.  I’m intrigued by the bizarre twists and turns the human psyche can take.  And my therapist would say there’s an element of vicarious thrill in writing about people who are so far outside the social norms, who get away with so much.  I rebelled against that idea; like most people, I like to think well of myself – but I have to admit she has a point.

Writing these stories is a safe way to express my own aggressive impulses, I suppose.  But there’s also a real pleasure in seeing these criminals apprehended – the real heroes are people like my friend Gregg McCrary, the former FBI profiler who goes after these violent offenders in real life.

For me, character and plot are intertwined; like the double helix of DNA strands, they’re inseparable.  They grow together, as it were.

Q: Readers can’t seem to get enough of Lee Campbell.  What do you think is most compelling about this character? 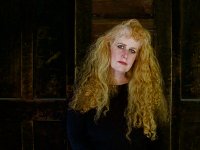 A: Well, I tried to create a man I might fall in love with myself – a tall, curly-haired Scot is a template of a certain physical type I find pretty irresistable.  And he plays the piano, which is very sexy to me (I also happen to play myself, so I could write about it realistically.)  And certainly some of his inner life is my inner life – that’s unavoidable.  His struggle with depression parallels my own journey a few years ago.  That’s his major flaw, and I guess readers like a protagonist with a vulnerability they can relate to.  He’s sensitive, but he’s given to outbursts of rage (again, I have to admit that’s something I can write about from experience.)

Q: I doubt you have personal experience with serial killers, and your background is performing and writing, so how did you learn so much about forensics and profiling?

A: Research, research, research.  I was lucky enough to audit a course at John Jay College with Dr. Lewis Schlesinger, who is a fabulous teacher and a great guy.  My bookshelves are lined with books on forensic psychology.  If you look at my DVR list of taped shows, most of them are things like Forensic Files, 48 Hours, and The New Detectives.  I read a lot of true crime – I just finished Michael Capuzzo’s excellent history of the Vicdoq Society, The Murder Room.  I’m almost done with the equally compelling The Monster of Florence, by Douglas Preston and Mario Spezi.

Q: Rumor has it you wrote both of your novels in unique locations. Where do you like to write, and why?

A: I’ll write anywhere – I wrote my first published short story at the corner table of the original Two Boots Restaurant in the East Village.  I’d order lunch and then stay for three hours.  And I love the café at Barnes & Noble on 82nd Street.  I like having other people around, so long as I can’t overhear what they’re saying; that’s too distracting.  (And there’s always the danger they’ll end up in my next book.)

But you’re probably referring to my residency at Hawthornden Castle just outside of Edinburgh.  That’s the most amazing place I’ve ever written – I’d stay up late at night, tucked into my little bed with my hot water bottle (the Scots don’t believe in central heating), while the wind wailed outside my turret window.  The castle overlooks the Esk River, and it was an hour’s hike to the village of Rosslyn, where you can see ruins of the castle and of course the famous Rosslyn Chapel.

In the summer I’m a resident of Byrdcliffe Arts Colony in Woodstock, NY.  I live in a hundred year old cabin, which I share with spiders and mice and racoons.  I say “share” because you don’t have that much say in the matter.  And of course there’s the occasional bear sighting.  I love it there because I love the country, the sights and sounds and smells of the woods.  At three in the morning you can hear the barred owls hooting, and deer come right up to your porch.  The raccoons are another matter – they’re nightime marauding thieves, the criminals of the animal world.  They’re even dressed for the part.

Q: Readers really enjoy meeting authors. Do you have any tour plans—either in person or virtually—coming up?

A: I do have a bunch of readings coming up.  And I’m working on the tour angle – so far I’m doing a lot of blogs and some blog tours.  Details are on my website.

Q: With International and audible sales for both books, what can readers can expect to see next?

A: We’re looking forward to the German edition – Piper Verlag has a gorgeous page in their catalogue, which is a thrill for me, since I was born in Nurnberg and majored in German literature in college.  And of course my agent is working on more foreign sales.  A movie contract would be nice.  I’d like to get Peter Outerbridge to play Lee Campbell, if possible.  And a year from now, the third book will be coming out.  The working title is Silent Kills.

One thing is for certain, if you’re looking for a great read, you need to check out the work of C.E. Lawrence. For more information, please visit her website at: http://CELawrence.com.

Christine Goff is the award-winning author of the bestselling “Birdwatcher’s Mystery” series.  She began her career writing non-fiction for local, regional and national publication.  Chosen Rocky Mountain Fiction Writers’ 2002 Writer of the Year, two of her novels were named finalists for the prestigious Willa Literary Award for Best Original Paperback Fiction; and her latest novel, DEATH SHOOTS A BIRDIE, was a named finalist for the Colorado Authors League 2008 Best Genre Fiction Award. Her novels focus on environmental concerns through bird-related issues. Currently, she is working on a new book; a thriller set in Israel.