In Yvonne Navarro’s Highborn, everyone deserves a second chance. Brynna Malak might be the exception to the rule.

Brynna is a fallen angel trying to earn redemption. She’s escaped from Hell in search of a new life on Earth, but Lucifer’s deadliest Hunters are hot on her trail. Police Detective Eran Redmond is after her for a different reason: he needs Brynna to help him find a serial killer who is terrifying Chicago… and the trail leads them right to Hell-spawned demons of the most dangerous kind.

She’s also got a very human problem: dealing with a stubborn, attractive cop who makes her long for everything she knows she can’t have.

Staying alive long enough to earn a shot at Heaven will mean breaking some major rules in the mortal world, as she learns just how complicated and wonderful being human can be. With so much stacked against her, even Brynna has to wonder if she’s crazy. But she’s not giving in without a fight. Not a chance in Hell…

“HIGHBORN is a twisted, urban fantasy noir full of cops and bullets and fallen angels. Yvonne Navarro crafts a hell of a story, a grim journey where one wrong step could mean death or damnation. A dark gem, and a great start to a killer new series.” –Christopher Golden–

“This exciting new series kicks off with a fallen angel taking her first steps toward redemption. Astarte/Brynna is an intriguing character and her attempts to adapt to modern human culture give her a
sympathetic edge. Navarro’s ability to tell a well-paced tale that is both hard-edged and emotional is impressive. Here’s to the next chapter!” — RTBookReviews.com— 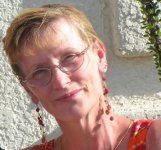 Yvonne Navarro lives in southern Arizona. She’s written nine solo novels about topics ranging from vampires (AfterAge) to the end of the world (Final Impact and Red Shadows). She’s also authored numerous film tie-ins, Ultraviolet, Elektra, Hellboy, and seven novels– five of them originals–in the Buffy the Vampire Slayer universe. Her work has won the HWA’s Bram Stoker plus a number of other writing awards. Her latest novel is Highborn (October 2010), the first book in the Dark Redemption Series. The second, Concrete Savior, is scheduled for June 2011. Visit her at www.yvonnenavarro.com.