David Wilbanks and Mark Justice have written a sequel to their novella called DEAD EARTH: THE GREEN DAWN. The new book is DEAD EARTH: THE VENGEANCE ROAD. Justice says, “Dave got the ball rolling when he told me he wanted to team up on a book that dealt with zombies and mutants. The first book had plenty of zombies (and aliens), and in the new one, we up the ante. While DE: TGD fell more in the area of small town horror, the new novel is ‘Mad Max’ cranked up to 11.” 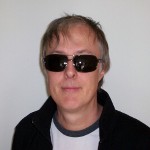 In THE VENGEANCE ROAD, when invaders from another world use demonic technology to raise an army of the living dead, they destroy Jubal Slate’s home and everyone he loved. Jubal wants revenge. It’s clear from that description that some good pulpy horror is a bit of inspiration. Wilbanks says, “All the excellent genre fiction and pulp I’ve ever read fuels my need to create. DEAD EARTH was conceived as sort of a cross between alien invasion fiction and straight horror. But mostly, it’s all-out action, something I think we’re both good at.”

Justice colorfully says, “When we start writing together, the ideas explode like the rotting skull of a zombie blasted by double-ought buckshot.”

The two men collaborate by email. Once a basic plot is figured out, one will write five pages or so, then send it to the other, then it gets tossed back and forth until finished.

Aside from the DEAD EARTH books, the two have published other stories. Wilbanks has edited several short story anthologies, including DAMNED NATION, as well as short stories and articles published in magazines like “Postscripts” and books like DARK JESTERS. Justice had a novella, DEADNECK HOOTENANNY sell out from Novello Publishers, and has had a number of stories published in anthologies, including in all four volumes of the LEGENDS OF THE MOUNTAIN STATE series. He also edited an anthology called APPALACHIAN WINTER HAUNTINGS. 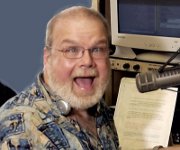 The two writers are considering another DEAD EARTH, somewhat dependent on the success of THE VENGEANCE ROAD, but meanwhile are working on solo projects and several short stories and anthologies. Justice has another collection of stories coming out in the spring titled LOOKING AT THE WORLD WITH BROKEN GLASS IN MY EYE, and is serializing an adventure thriller at http://pulpnocturne.blogspot.com/ called DONOVAN PIKE AND THE CITY OF THE GODS.

When not writing, Wilbanks says he likes to read, listen to music “and waste time surfing and networking on the evil Internet.” Justice works in radio in Kentucky where he lives with his wife and cats.

DEAD EARTH: THE VENGEANCE ROAD will be available in trade paperback and Kindle e-book editions, and the first book in the series will soon be available on Kindle as well.