Teen Sleuth Takes to the Countryside for Latest Mystery 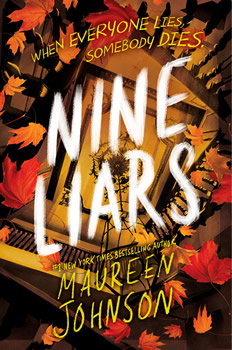 Bestselling author Maureen Johnson gives readers another fun mystery to solve and the opportunity to spend time with her beloved series characters—Stevie Bell and the gang—in her latest Truly Devious installment, NINE LIARS.

In it, Stevie and her friends go to London to visit her boyfriend, David, and become embroiled in solving a cold case. In 1995, nine recent graduates of Cambridge University’s theater/comedy program travel to Merryweather, the country manor owned by one of their families. After a drunken game of hide and seek, two members of the group go missing—and are soon found in the woodshed, having been murdered with an ax.

Although the case was written off as a burglary gone wrong, one of the remaining members of the group has a different explanation for the tragedy—and it appears that the killer is still playing a deadly game. That is, unless Stevie and her friends can get to the bottom of this mystery first.

In this interview with The Big Thrill, Johnson shares insight into the inspiration for NINE LIARS, reveals the music that was kicking around in her head as she wrote it, and talks about the importance of friendship.

In the opening scenes of NINE LIARS, we’re introduced to a group of comedy-writing teens referred to as The Nine. Even without the (soon-to-be) addition of Stevie and her gang, we’re talking about a lot of characters, all of whom are so well fleshed out they could have had their own story. I’d love to hear a bit more about how that group developed for you and what made you want to weave them into the Truly Devious universe. 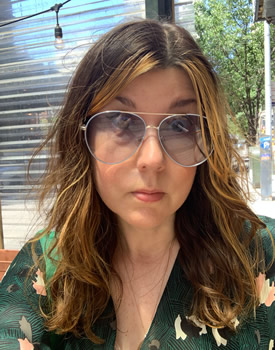 Johnson brings the Magnum, P.I. vibe to the English countryside.

The cold case backstory of NINE LIARS takes place in 1995, when a group of recent graduates from Cambridge University go to the country house belonging to one of its members. This particular group of nine are a theater/comedy group. Cambridge University has one of the most famous undergraduate comedy scenes of any school in the world—Footlights. But there are people that don’t make it into Footlights, and there are just groups that come together. I’ve always been obsessed with British comedy, so this was something I tapped into. Plus, they are theater people. I was a theater person as an undergraduate and a graduate student. Theater people are tight. They are up in one another’s business. They do everything together, and things are messy and spectacular. The Nine all love each other, even while they may be angry or maybe even hate each other a little. Emotions are big. And since this is 1995, the Britpop is big. It’s all a big hot mess. But they are friends—just like Stevie and her friends are a core group of friends.

In the scenes set in the past with The Nine, we have a bit of a “dark academia” vibe—it’s very atmospheric, and I love the stormy game of hide and seek, which ultimately ends up in murder. How did you land on the setting for this book, and what were some of the inspirations, either fictional or real, that helped bring not only the setting, but the vibe to life for you? 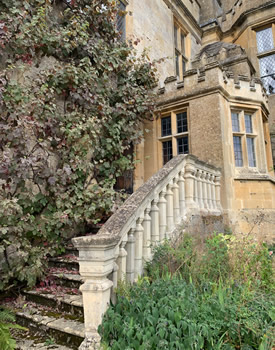 A bit of atmosphere from Hidcote Manor in Gloucester. “Writing a murder mystery involves a lot of looking at stairs and walls and doors,” Johnson says.

Being a lifelong mystery fan, I wanted to do a country house murder mystery—ideally, an English one. So I’m drawing on my love of this particular kind of story. The manor house murder is a classic puzzle from the golden age of mystery for a reason—you have a set cast of suspects and a contained staging area for the puzzle to play out. Country houses are small enough in the grand scope of things to give the problem limits, but big enough and weird enough to have lots of hidey-holes and passages and things like that. There’s also an air of unreality to them. It feels like a backdrop, not a place people would really live. I built Merryweather—the house where the murders take place—with great care. Look at the map! There are clues in there.

Soon, we’re checking in with how Stevie and her friends are doing at Ellingham Academy, and while some of them are doing well, we find Stevie with some challenges—primarily financial in that she needs scholarship funds to pay for college. So when her long-distance boyfriend, David, invites her and her gang to England, she’s excited for the “break.” But of course she lands herself another cold case—the mystery of The Nine. Her vulnerability and insecurities at the start of this book make her approach this mystery a little differently and in some ways puts to test the bond she has with her friends. Without revealing any spoilers, what did you want to show in terms of Stevie’s character evolution in this story? 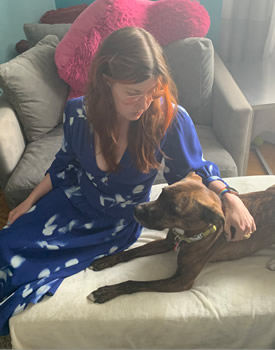 Johnson with her dog, Dexy

Stevie’s confidence level rides up and down a lot, and this period—early in senior year—is a tough one. She’s still with most of her friends, though David now lives somewhere else. David has invited her to England, which is promising! But then everything there seems better and cooler, and she’s not familiar with the physical places he spends his time. She also doesn’t know the people. Her friends are gearing up for college. She’s frankly kind of terrified at the thought of it all. She can handle murder mysteries—she cannot handle college applications and the wide-open future.

Though all of the core group is well developed, Nate seems to be a reader favorite. He’s great in NINE LIARS. What is it about him that you think resonates so strongly with your fans?

When it comes to writing a series, how do you strike a balance between satisfying loyal fans and making sure new readers can jump aboard? 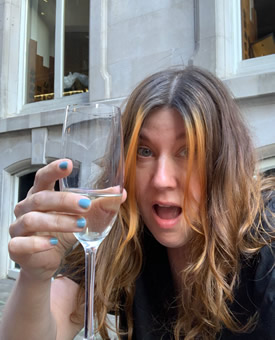 Johnson returns to England to see family and friends for the first time since COVID.

When I set out to write Truly Devious, I was making a detective mystery with the intention of having my detective go off in other books to work on other cases. That’s how most detective novels work—you can pick up pretty much any one and read it without knowing the characters beforehand. Doing the “previously on” part—compressing it—that can be tricky. I really want the experience to be standalone. That being said, if you know Stevie and the group, you’ll get an extra experience. There’s a lot going on with them.

The Truly Devious books are fabulous mysteries, and the series has a well-deserved fanbase of readers of all ages. Of course, there is always a case involved, but one of the foundational tenants of these books is the friendship between Stevie and the gang. Was that something you intentionally crafted at the start of the series or a bond that has developed along the way? How does this friendship inform the writing or the story, if at all?

I think more than any of the other books with Stevie, this one is really about friendship in a lot of ways. The friendship of The Nine informs what happened in 1995 and since. And Stevie and her friends are the core of these books. Stevie isn’t always a good friend—she’s trying, but she gets a lot wrong. Which is how it often goes. The friends have always been at the front of my thoughts in writing the books. It’s organic.

I don’t want to go too much into spoilers, but the mystery in this book was fun to solve—and having it originally set in the ’90s was an additional nostalgic bonus. What was the germ of inspiration for this book? 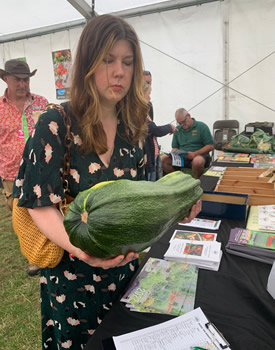 Johnson tries to guess the weight of a giant zucchini at the county fair in England while doing some English countryside research for NINE LIARS.

I was in London for the summer of 1995, during the Battle of Britpop. I lived there with my friend Kate (who is now my agent as well—we’re close). We did a summer work abroad. I was a waitress during the day and a bartender at night; she worked in the office of a theater. We never had any money and mostly subsisted on Honey Nut Cheerios and whatever was left over from my work. Kate worked in the theater where the show Riverdance was playing. It was the biggest show of the year. Everyone wanted to see it. We had no money to do anything and sometimes paid our rent in change, but we could go see Riverdance every night if we wanted to, because Kate could stand in the back. We saw Riverdance so many times—and then we could have the leftover beer from the office. We lived in a flat that had three doors that were impossible to open, so we usually climbed over the trash cans in front of our room and went in through the window, so it was very secure. It was a hot, trashy summer—it was great. And yes, in the background, I mostly remember Blur. I think it comes through in the book that I prefer Blur. There is so much soundtrack in this book, more than any other book I’ve ever written. I have a playlist all ready.

What’s the key to nailing dual timelines in a novel?

Weaving the stories. I’m always thinking about how the past impacted the present—so you may see the same people or same places, just at different times. Some things change—but they also may be very much the same. You also have to keep all the details straight. Does this question imply that I nailed it? I HOPE SO.

NINE LIARS ends with an impressive cliffhanger, leaving us to believe that we could be in for another Truly Devious installment. If true, what can you share about that book—or any other projects you’re working on?

Right now, I am working on a separate mystery called Death at Morning House. But I am also working on Stevie Bell mysteries six and seven!