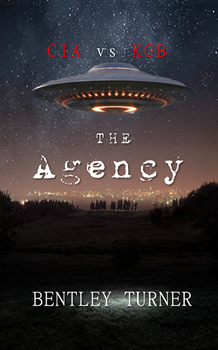 This historical suspenseful thriller features Mason Cunningham, a well-educated former Navy pilot turned CIA agent who becomes the director of the department that investigates UFOs. His job is not only to determine sighting locations but also determine the health of those who reported the sightings and experienced exposure to bright lights. When Cunningham learns that a recently retired agent, who reportedly died, has been seen by one of his staff members, his job comes to a crashing halt, and an investigation begins. What he discovers just might put his department–and the CIA–in jeopardy.

The Big Thrill spent some time with author Bentley Turner learning more about his latest thriller, THE AGENCY:

Yes. I didn’t know whether I would enjoy writing a historical thriller about the CIA’s investigation of UFOs (although there is more going on in this thriller than just this), but I enjoyed writing about the characters and their situations. In fact, I enjoyed the experience so much that I may try to write another historical thriller. Of course, I’m certain it would be about a different subject.

What happens in the last several chapters of the book opens the eyes of the major character. In short, he learns more than he was expecting. Much more.

I have read numerous writers over the years, including Erskine Caldwell, Ernest Hemingway, John O’Hara, John D. MacDonald, James M. Cain, Erle Stanley Gardner, Donald Hamilton, Harold Robbins, Irving Wallace, and Sidney Sheldon, among others. However, I don’t know if any particular writer has influenced me. I will say that a few have caused me to try to write something others would read and enjoy.

Is “The Agency” based on factual information?

Yes. Different agencies and departments of the US government conducted investigations of UFOs for years and years.

Although I had written a couple of mysteries, I had not written a historical thriller about the CIA’s investigation of UFOs. Since the novel concerns the federal government’s investigation of the subject during the late 1970s and early 1980s, I had to do research, which I enjoyed. As a result, I believe I made the novel more accurate and realistic.

I will answer the second question first. The biggest opportunity was my investigating the subject matter. I wanted to learn what the federal government had learned about UFOs. The biggest challenge was not just writing a historical and realistic thriller that, hopefully, readers will enjoy but spending hours going through various books and documents about the subject.

Bentley Turner has written short stories and poetry for literary journals and anthologies. He is the author of The File on Thomas Marks, a police procedural; The Prize Winners and Other Stories, a collection; A Killing in Oklahoma, a mystery and legal thriller; and THE AGENCY, a historical and suspenseful thriller about the CIA and UFOs.