Getting Away with Murder 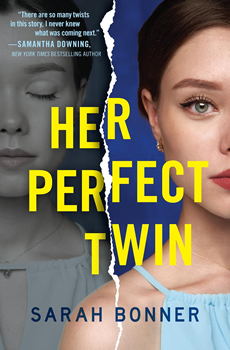 If you have a sibling, you likely know all too well the struggle of pushing back murderous impulses in the midst of a heated argument. HER PERFECT TWIN by Sarah Bonner is a story about those murderous impulses unleashed—and then the quest to cover up the damage.

Among all sibling categories, twins are mythologized to be the closest emotionally. Twins are supposed to be “closer than close,” but a lifetime of hard knocks and betrayal has driven sisters Megan and Leah apart. When Megan finds evidence Leah has once again tried to take the man Megan loves, the confrontation results in Leah getting a wine bottle to the head. Suddenly, Megan has a dead body on her hands, a husband she doesn’t know if she can trust, and a COVID lockdown looming.

With elements of a whodunit, a how-to-get-away-with-it, a locked-room domestic suspense, and an exceptionally satisfying ending, HER PERFECT TWIN is crammed with unique twists and turns that will have you racing through the pages at lightspeed.

The Big Thrill had the pleasure of chatting with Bonner to ask her about sibling rivalry, using COVID and narration shifts to create tension, and how sometimes getting away with murder is the least of your worries.

You write these characters like you have siblings of your own. Did you delve into any life experiences to help create such believable tension between your twins, Megan and Leah? 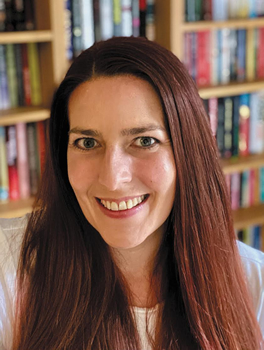 The question people always ask me is, “Do you have a twin sister?” I don’t. I have an older brother. He’s three years older than me, and we’re pretty close. We didn’t really argue that much, so I had to look outside of my own family for these relationships.

Sibling relationships have always fascinated me, and familial relationships are so interesting because my family is really, really small. So I think I’ve always looked at these larger families and wondered how those dynamics work. I’ve been almost a voyeur of other people’s family relationships and then woven in pieces of what I observed into Megan and Leah’s relationship.

Tell me about the relationship between Megan and Leah. Given their father was a bigamist and they were the children of his second, hidden family, their isolation and trauma should have made them inseparable, yet they are completely estranged when we meet them.

Throughout the novel, I kind of reveal their [fights] through flashbacks into their past. And I really built on this idea that Leah spent her entire life trying to steal everything that Megan had. Even the things she didn’t really want. And Leah almost reveled in making Megan’s life as uncomfortable and as horrible as possible.

So Leah does have this kind of sociopathic psychopathic edge to her of just liking to twist the knife. And that was quite deliberate because…I wanted to make sure that, as the reader, you felt a sense of not necessarily approving of what Megan did, because, you know, she did murder her sister, but at least you could understand why she might have felt herself pushed to do that. And also maybe feel a little bit like Leah deserved it.

Megan tells us about how Leah slept with the first boy Megan ever loved. How would Leah have told us that story?

If Leah had been telling that story, she would have made it much more about how she was saving Megan from doing something that she would have regretted, and that if the boy didn’t realize that she was Leah and not Megan, then he obviously didn’t really love her and he wasn’t worth worrying about. She would have twisted it to be almost like she was doing Megan a favor rather than doing something that is one of the worst things you can do.

This is a story about a lifetime of sibling rivalry building to a moment where one sister lashes out at the other, and then it becomes a “how will she get away with it” story. How was this kind of mystery different to write than a traditional “whodunit”? 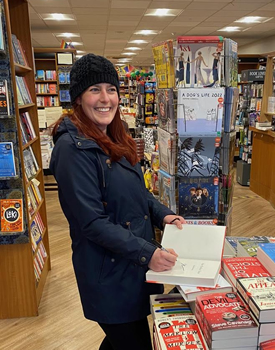 Bonner signs copies of HER PERFECT TWIN when it was released in the UK.

So the really interesting thing with this is that I didn’t really realize that’s what I was writing until I was probably 30,000 words in. I’d written an outline, I knew where I wanted to take the story, but I hadn’t really thought about it in those terms until I was quite far through it. I was out walking the dog one day and suddenly had this moment of realization that I wasn’t writing a traditional psychological thriller, I was writing a book about a woman that you need to want to get away with murder.

And then I had a momentary panic. Could I pull off that kind of story? I dug out a ton of other books that have a similar protagonist at the center, read all of those, regrouped myself, and then sat back down at my computer and carried on writing it. So, yeah, it certainly wasn’t intentional, it was just the way the story evolved.

What character traits did you put into Megan to be a murderer we can root for?

I think the fact that I didn’t realize what I was trying to achieve until later actually really helped because I didn’t write her from the outset as a deliberately sympathetic character. I wrote her as if she was just a normal person who ended up in this completely extraordinary scenario. And I think because of that, I didn’t try and make her too sympathetic. And I do think that helped to round her out and make her more real. I think if I’d realized right from the beginning what I was going to be asking the reader to do in terms of a suspension of normal moral conduct, I think it wouldn’t have worked as effectively.

It’s the age-old thing where every single person has … had that moment where … you’ve just said, “I will kill you if you keep doing this.” And most of us don’t mean it and would certainly never act on it, but I think that does tap into something that we all recognize. It was very much not premeditated, and I did want to make sure with the setup that it didn’t feel that Megan had gone to have that conversation to kill her. It was very much spur of the moment.

Point of view and narrator shifts aren’t unusual in a mystery novel, but what made you decide to use them as part of the reveal moments in your novel? 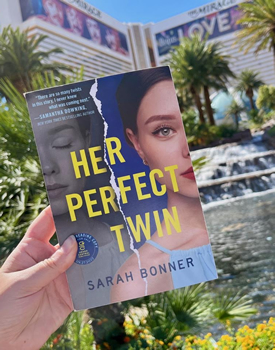 I think that is one of the great things you can do with books as a storytelling form that I don’t think you can do with other mediums. Because I’ve written it in such a close first person, almost as if you’re inside the mind of the character listening to their internal monologue, I wanted to use those changes in points of view to have that moment where you realize as the reader that the story that you thought was unfolding looks very, very different from the other side.

I hadn’t intended to do it originally. Originally the book was always going to be from a single point of view, and then I hit a bit of a block. One night I wasn’t quite sure where to take the story, and I remember hearing another writer make this suggestion that, if you get stuck, start writing a scene from a different point of view and see if there’s something else there that you haven’t realized existed. I started writing Chris’s POV, and after about two pages I realized that he was far too interesting a character to be in his head and not use that.

Bringing in Chris’s point of view raises the tension level because he isn’t all he seems at first.

No, not at all. You get his point of view, and suddenly, you see there’s more going on here.

Yes, when you get to Chris’s narration, it makes the fact that Megan’s a murderer a minor problem.

Yes, it does. And also, talking before about making Megan sympathetic, and I think that as soon as you hear Chris—the real Chris, not the Chris that he presents to the world, but the actual, real Chris—you suddenly do feel a lot more sympathy for Megan. 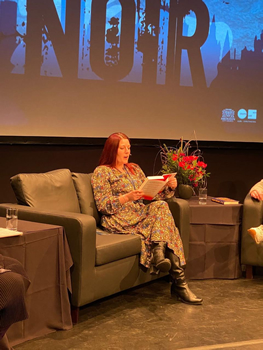 Bonner was a panelist for the 2022 Granite Noir Crime Writing Festival in Aberdeen, UK.

You use the COVID lockdown as a major tension-building device. Was this a serendipitous moment, or did you build the story around the lockdown?

I didn’t want to talk about COVID itself, but it did feel like [the lockdowns] could work as a device. A friend of mine and I discussed right at the beginning of lockdown about how difficult it would have been to live a double life. What would you have done on day one of the lockdown when we’re told as of now you can’t go to work, and you can’t go to the shops? And I thought it was such a fascinating question because there must have been people who were trapped with one family and trying to find an excuse to their other family as to why they weren’t at home.

I have a novel coming out in the spring in the UK and the US next autumn titled Her Sweet Revenge. No sisters this time, but it has two very, very close friends. It explores those kinds of female friendships, particularly ones that we develop when we’re quite young, and then how they change as we become adults. It’s a bit of an homage to those friends who aren’t necessarily part of our day-to-day lives but who we would still drop everything and go avenge their deaths if we needed to.