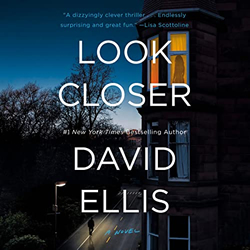 While listening to several mystery audiobooks featuring multiple narrators, people often come to appreciate the investment made to provide listeners with the resulting immersive experience. David Baldacci, author of numerous thriller series, mentioned in an interview that he felt it was only fair to listeners and to narrators to have men performing male roles and female narrators voicing the female characters. Thus, most of his novels, including the latest, THE 6:20 MAN, are read by multiple narrators. In David Ellis’s LOOK CLOSER, the plot is revealed through four main characters (two men and two women) with distinct personalities. Narrators Will Damron, Hillary Huber, Elizabeth Garrett, and Steve West each take on one of these main roles and fully step into their characters with voice, pace, tone, and attitude. As the story moves back and forth in time and between different perspectives, listeners are kept guessing who to trust and what is real—but they never have to struggle with which character they are hearing.

THE PALLBEARERS CLUB by Paul Tremblay also makes great use of multiple narrators. This Earphones Award-winning psychological thriller provides a stage for Graham Halstead, Xe Sands, and Elizabeth Wiley to demonstrate their voice talents. The audiobook crosses genres of horror, fantasy, memoir, and even has humor woven throughout. The audiobook is truly enhanced by having the different main characters performed by the different narrators. 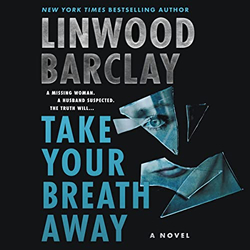 TAKE YOUR BREATH AWAY by Linwood Barclay is another Earphones Award-winning audiobook, and this one features an ensemble of eight narrators: Joe Knezevich, George Newbern, Hillary Huber, Pete Simonelli, Michael Crouch, Lauren Fortgang, Jim Meskimen, and Karissa Vacker. With the dramatic skills of these narrators, the characters surrounding Brie’s mysterious disappearance—and her reappearance six years later—come vividly to life.

Another effective use of multiple narrators is to voice distinct elements of an audiobook. This is the case with Chris Bohjalian’s THE LIONESS. Golden Voice January LaVoy performs the main story. Using her considerable talents with voices, accents, pace, tone, and personality, she masterfully conveys a full cast of male and female characters in this adventure taking place on safari in 1960s Africa. The press clippings at the beginning of each chapter are read by narrator Grace Experience, while the prologue and epilogue are performed by Gabrielle de Cuir.

When the use of multiple narrators is done well, listeners experience the full drama and thrill of the author’s story.

AudioFile’s editors recommend five new mystery audiobooks with excellent narrations to bring the stories to life. Looking for a creepy tale as we head toward Halloween? Try the latest thriller from Rachel Howzell Hall. Want something cozier? You’ll love Golden Voice Barbara Rosenblat’s narration of a tale set in a quaint English boarding house. Listeners who love investigating with DI Vera Stanhope will be thrilled to hear her next chapter in Ann Cleeves’s hit series. Take a look below for all of our picks this month, and start listening! 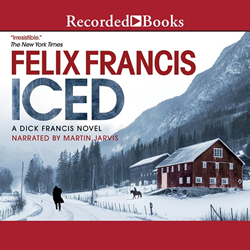 This entertaining audiobook, narrated masterfully by Golden Voice Martin Jarvis, is more than the story of a jockey racing a horse down the icy slope known as the Cresta Run. It’s a novel about jockey Miles Pussett’s struggles with depression, dependency, heartbreak, love, and the legacy of his father. In an upbeat style, Jarvis transforms Felix Francis’s latest book into a fast-paced romp. Jarvis skillfully creates distinctive voices for the people who inhabit Miles’s life and the demons who inhabit his psyche. 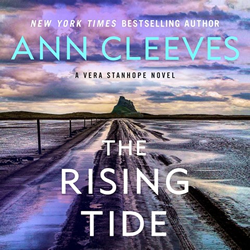 Janine Birkett’s captivating narration does full justice to Ann Cleeves’s masterful storytelling in the latest installment of her mystery series. Detective Inspector Vera Stanhope and her team arrive at Northumberland’s Holy Island in response to an apparent suicide. The victim is one of a group of aging schoolmates who reunite on the island every five years. When the death proves to be murder, Vera must unravel the friends’ stories and secrets. Birkett is superb at creating voices for the diverse cast of relatable characters who are imbued with unique accents and distinct personalities. She sweeps the listener along, generating suspense in this thoroughly compelling listen. 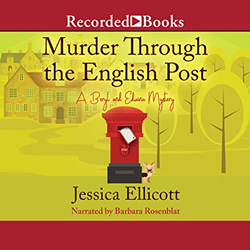 MURDER THROUGH THE ENGLISH POST: Beryl and Edwina, Book 6

A phenomenal narration by the esteemed Golden Voice Barbara Rosenblat brings all of the characters of this cozy mystery to life. Delivering seamless transitions between Beryl, the American adventuress, and Edwina, the prim and proper Brit, Rosenblat deftly navigates this story of poison-pen letters and preposterous rumor mongering. Convincing accents for all the characters set this narration apart. Set in a deliciously quaint English boarding house, this mystery will appeal to fans of Agatha Christie and MC Beaton. 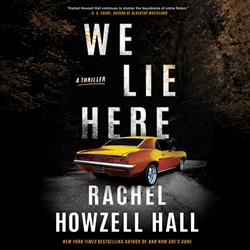 Narrator Alaska Jackson takes listeners through this twisted thriller involving a TV writer who finds herself in the middle of a horrifying mystery. Yara Gibson is reluctant to return to her hometown for her parents’ anniversary party. When an estranged family friend tells Yara that she needs to tell her a shocking secret before it’s too late, Yara soon finds herself running from a murderer. Jackson’s inflections perfectly capture the story and make the way the individual characters communicate with one another seem real. Listeners get an intense experience from this well-performed audiobook. 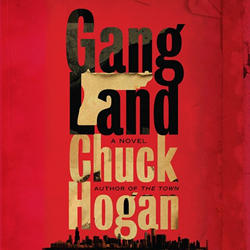 Justin Price does an incredible job performing this grisly thriller featuring a real-life mob leader who ran his Chicago crime organization with an iron fist for decades. He’s out for revenge against mobsters who invaded his home, ravaged it, and stole important papers. In a story in which no one is a hero, Price applies sympathetic nuance to his portrayal of underlings who don’t want to kill people they’ve known for years but do it anyway.