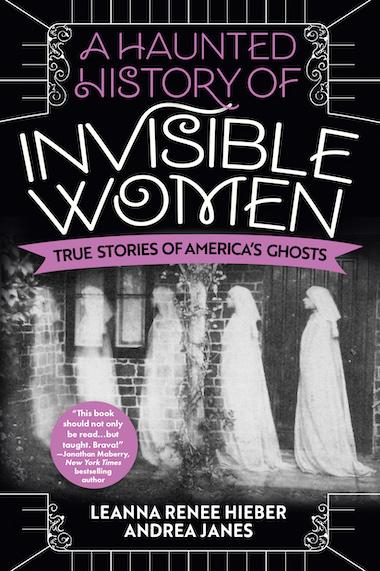 From the notorious Lizzie Borden to the innumerable, haunted rooms of Sarah Winchester’s mysterious mansion, this offbeat, insightful, first-ever book of its kind explores the history behind America’s female ghosts, the stereotypes, myths, and paranormal tales that swirl around them, what their stories reveal about us—and why they haunt us…

Tales whispered in darkness often divulge more about the teller than the subject. America’s most famous female ghosts, from “Mrs. Spencer,” who haunted Joan Rivers’s New York apartment, to Bridget Bishop, the first person executed during the Salem witchcraft trials, mirror each era’s fears and prejudices. Yet through urban legends and campfire stories, even ghosts like the nameless hard-working women lost in the infamous Triangle Shirtwaist Factory fire achieve a measure of power and agency in death, in ways unavailable to them as living women.

Riveting for skeptics and believers alike, with humor, curiosity, and expertise, A HAUNTED HISTORY OF INVISIBLE WOMEN offers a unique lens on the significant role these ghostly legends play both within the spook-seeking corners of our minds and in the consciousness of a nation.

Originally, Andrea and I had pitched this book as being about New York ghosts, as that’s our specialty. Kensington wanted us to expand the premise to other locations around the country. So we included other places and stories we either had passions for or some personal experiences in. The character of the ghosts, the real people behind the ghost stories, led each tale. We’re drawn to people. Their ghost stories then follow. We try to give voice to both life and death. 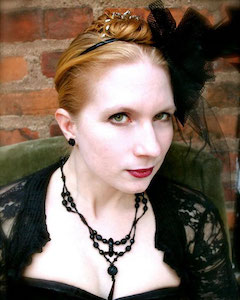 I’ve been telling ghost stories all my life, so ghosts in general are truly a lifelong passion. Andrea has been drawn to history and how it intersects with paranormal tales for her entire career as well. We’re both ghost-tour guides with a passion for telling true history, not exaggerated sensationalism. Doing justice to the memory of the real people behind their spectral tales is deeply important to us.

The biggest challenge the book presented was narrowing down the stories to tell and making sure we could do them justice. Our book is a very personally curated list of stories that are full of personal opinion. We hope to be able to do more with this premise in the future. The opportunity this book provides us is that this book is the first of its kind to fully unpack and examine women’s ghost stories through the lens of trope, stereotype, and women’s history. We try to make this book conversational and relatable while being something we hope will make people think.

Andrea was working on edits and rewrites so hard she burst a blood vessel in her eye the week it was due. What a bad-ass. That’s entirely true. And seriously, we worked so hard with so many sleepless nights on this book. It haunted us in every way, and we hope it haunts you too.

We’ve an extensive bibliography of women writers and paranormal experts included in our book, authors who have done incredible work documenting historical spaces and ghost stories told within them. I’m particularly indebted to Captive of the Labyrinth by Mary Jo Ignoffo, a comprehensive biography of Sarah L. Winchester that was critical for my Winchester Mystery House chapter. I also am indebted to the late Jan Bryant Bartell, whose out-of-print memoir Spindrift became the basis for what I believe to be my most powerful chapter in the book.

Turning the book over to our editor in pieces due to a time-crunch of deadlines was the most difficult part! Andrea’s vision and voice were very shared and natural as a companion to mine—we write from the heart and with a lot of conviction—so it was honestly just the logistics that were trying. Hopefully we’ll get to do another volume and relay the manuscript between us so that our poor editor doesn’t have a Frankenstein’s Monster of chapters to assemble!

Leanna Renee Hieber is an award-winning author and paranormal history expert. A regular speaker at sci-fi/fantasy conventions, she’s appeared on film and television on shows including Mysteries at the Museum and Beyond the Unknown. She’s a three-time Prism Award-winner for her Strangely Beautiful series, and a Daphne Du Maurier Award-finalist for Darker Still. After earning a BFA in Theatre Performance and a focus study in the Victorian era, she spent many years in the professional regional theater circuit, skills that serve her well as a speaker and a ghost-tour guide for Boroughs of the Dead in New York. Hieber lives in New York and can be found online at: LeannaReneeHieber.com.

Andrea Janes is the founder and owner of Boroughs of the Dead, New York City’s premier ghost tour company, which has been featured on NPR.org, The New York Times, Jezebel, TODAY, the Huffington Post, Gothamist, the Travel Channel, Condé Nast Traveler, Mashable, and more. Janes is also the author of the YA novel Glamour, several short horror stories, and a horror novel, Boroughs of the Dead (the inspiration for her company). Visit boroughsofthedead.com.