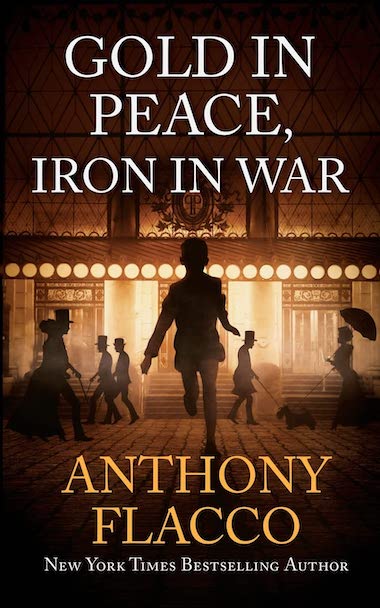 A talented detective duo must unmask a sinister child smuggling ring and expose the corruption in a world rocked by war.

Four and a half years after the terrorist bombing plot of 1916, expert detective Randall Blackburn is ready to face his toughest case yet. When a San Francisco mayor recruits him and his adopted daughter Vignette Nightingale to bust a horrifying child smuggling ring, Randall plunges into a sinister investigation with roots far deeper than he could have ever imagined.

As they begin to peel back the layers of mystery behind the so-called “Orphan Trains,” Randall and Vignette piece together the shocking truth behind an underground railroad with ties across the Atlantic. Determined to stop the ruthless practice and bring down the culprits, the detective duo must use all of their wits to expose the corruption that lurks in the shadows.

But there are powerful figures who would rather keep the Orphan Trains a secret… and Randall quickly finds himself locked in a deadly battle to unmask the shady people who have crept into the upper echelons of power.

Which took shape first: plot, character, or setting?
For this one, the plot came first, because I knew I wanted to write about the Wall Street bombing of 1920 in NYC, which has never been officially solved. Since this is the fourth book in the Blackburn-Nightingales crime series, the principal characters were already set, leaving only the supporting characters, both true-life and fictional, to be incorporated into the story. 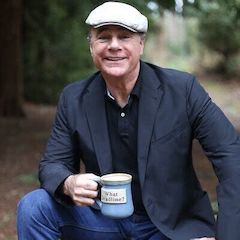 What attracts you to this book’s genre?
I am constantly fascinated by the way history repeats itself and by our refusal to learn from it.

What was the biggest challenge this book presented? What about the biggest opportunity?
The biggest challenge to any historical work, in my opinion, is the research. There is always the danger of some little fact throwing off an entire scene because you got it wrong. Long before the words “Chapter One” are written, there must be countless hours of reading and study if an author wants their story to have an authentic feel to it.

Was there anything new you discovered or that surprised you as you wrote this book?
I have been repeatedly impressed with the way these disparate characters bind together and form a functional family unity when none of them ever had one before. I feel that my characters have taught me something about human nature in that regard. My overall “mission” in writing this book and this series is to find believable ways for damaged people to come together to form a family unit which nurtures and supports them despite their flaws.

No spoilers, but what can you tell us about your book that we won’t find in the jacket copy or the PR material?
Vignette Nightingale (24) struggles with her sexual identity as an unrealized lesbian who has no language to describe herself but only knows she has no desire to marry.

What authors or books have influenced your career as a writer, and why?
John Steinbeck’s book Tortilla Flat continues to inspire me many years after first reading it. He took an improbable idea, that a bunch of homeless drunks have banded together to form a small community and have learned to give themselves dignity by extending dignity to one another. They do this using fake “Shakespearian” words and phrases when addressing one another, never the rest of the world. In this way, these social rejects make themselves and one another “special” and create their own self-esteem. Brilliant insight into human nature. Robert A. Heinlein’s Stranger in a Strange Land taught me a character born on Mars can communicate genuine insight into human behavior, meaning any character can do so if the author has done their head work.

Can a group of individuals who have never experienced a stable home come together and form a stable home for themselves and one another?
Yes. This story lays out how they do it.

Anthony Flacco is an author of six nonfiction books and four historical novels, all released by major publishers. His current book series for Severn River Publishing, The Nightingale Detective Series, employs two previously published books and two original entries. The four-book series (so far) begins three minutes before the Great San Francisco Earthquake and Fires of 1906 and sets our heroes on the chase for a serial killer who is using the chaos of the post-quake city to hide the crimes.

Anthony holds an MFA in screenwriting from the American Film Institute. He was selected for the Walt Disney Studios Screenwriting Fellowship and spent a year writing for the Touchstone Pictures division.

His first nonfiction book, A Checklist for Murder, was acquired in auction by Dell Books and turned in solid sales. Anthony adapted his book as a two-hour television movie script and sold it to NBC Studios.

He completed his nonfiction book Tiny Dancer for St. Martin’s Press, and the advance copy was selected by Reader’s Digest as their Editor’s Choice for August 2005—their 1,000th Commemorative Issue. The Kansas City Star named Tiny Dancer “one of the 100 Most Noteworthy Books of 2005.”

The book is an international bestseller in Italy (Piemme) with sales to date of over 350,000 in that country alone.

His debut novel, The Last Nightingale (Ballantine) was released to acclaimed reviews including a NYT rave and was nominated by the International Thriller Writers (ITW) as one of the top five original paperback thrillers for 2007.

Winner of the USA Books News 2009 Best True Crime Award for The Road Out of Hell: Sanford Clark and the True Story of the Wineville Murders (Union Square/Sterling, Nov. 2009) is based on one of the most heinous serial killers of the 20th Century, Gordon Stewart Northcott, which is the crime inspiration for the film Changeling.

Winner of the USA Book News Awards: Best Autobiography of 2013 for Impossible Odds: The Kidnapping of Jessica Buchanan and Her Dramatic Rescue by SEAL Team Six was published by Atria/Simon & Schuster in May 2013 and debuted on the NY Times Bestseller List. Optioned screenplay to Sony TV. The book is currently in development at Warner Brothers Studios for Clint Eastwood at Malpalso Productions to direct.

In the Matter of Nikola Tesla: A Romance of the Mind was published in 2013 by Diversion Books as both an e-book and trade paperback and by Piemme in Italy as well as in Russia and Estonia.

Taking My Life Back: My Story of Faith, Determination, and Surviving the Boston Marathon Bombing was written for survivor Rebekah Gregory and published to acclaim by Revell Books in 2017 and received a starred review by Publishers Weekly.