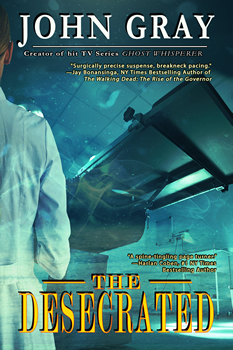 None of those are in Jennifer Shelby’s job description when she joins the night shift at the NYC Morgue. She just wants a quiet place to regroup after dropping out of college.

She also hadn’t planned on babysitting a British superstar.

Trevor Pryce has been sentenced to community service at the morgue. His charm and love for macabre, practical jokes irritate Jennifer equally. And put him at the top of her list of suspects when things turn deadly serious.

Jennifer doubts her own sanity when she starts to see the impossible. Corpses move. They sit up. They try to speak. The visions plaguing Jennifer begin to manifest outside the morgue as well. She feels like there’s nowhere to hide as the murders and mutilated bodies pile up. But she finds an unlikely ally.

As the hauntings become more shocking, Jennifer and Trevor join forces to uncover the truth. What they find is dark and malignant. And the trap they fall into threatens to close over them forever.

The Big Thrill had the opportunity to catch up with award-winning writer-director-producer John Gray to learn more aBout his debut novel, THE DESECRATED: 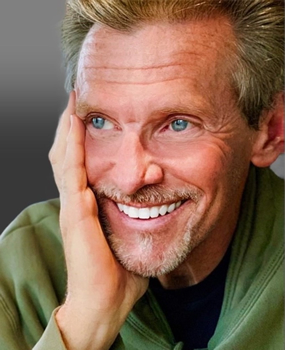 As a long-time screenwriter, I found writing a novel really challenging, in that my training and habit when I write scripts is to try and be as sparing as possible with words and description, because I know there will be an audience who will not read these pages but will see the images. With a novel, we have to paint those pictures with words alone, so oftentimes the writing was counterintuitive, as I had to delve deeper into atmosphere and setting. What was incredibly freeing and exciting for me was the realization that I could spend as much time as I wanted developing characters and their back stories without the restrictions of a two-hour running time.

In this case, character and setting sort of collided at once. Some years ago, I became aware that the actress Lindsay Lohan was sentenced to community service at the L.A. County Morgue. I thought this was a really interesting setup—full of both scary and humorous possibilities. And as I developed the story, I turned Lohan into a reckless male action star who careens into the world of a young woman in crisis who is trying to get her life back on track.

I think people might be surprised that there are moments of humor and emotion in the book.

Stephen King, goes without saying, also Harlan Coben, Lisa Gardner, Ruth Ware, Jo Nesbo. All of these authors manage to infuse their work with real humanity. And of course they are masters of twists and turns, which I love and tried to pepper my novel with.

I’ve been a lover of the horror/supernatural thriller/suspense genre since I was a boy. I’ve always loved a good scare, always loved Gothic horror, and am thrilled to be working in that arena.

Brooklyn-born John Gray is an award-winning writer-director-producer of films and television and the creator of the long-running TV series Ghost Whisperer. He has written and directed many feature films and movies for television, including White Irish Drinkers, starring Stephen Lang and Karen Allen; Martin and Lewis, starring Sean Hayes and Jeremy Northam; the Emmy® nominated A Place for Annie, with Sissy Spacek; the Emmy® nominated mini-series Haven with Natasha Richardson and Anne Bancroft; Helter Skelter, and many others.

Gray has directed numerous episodes of broadcast and cable series, including multiple episodes of the NBC series Grimm and was also the producing director of the CBS series Reckless. Gray’s acclaimed short films have played and are currently playing in film festivals all over the world, including “French Kiss,” which has also notched 6.3 million views to date on YouTube. He is married to writer-filmmaker Melissa Jo Peltier, and they make their home in New York and Cape Cod, MA. THE DESECRATED is his debut novel.