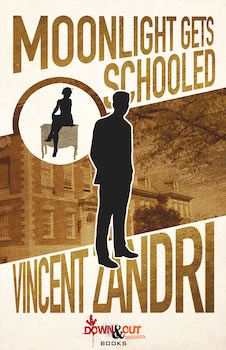 When a defeated-looking man shows up at Moonlight’s riverfront loft in the middle of the night seeking the PI’s services, he does something quite unexpected. He kills himself with a gunshot to the head. After APD Chief Homicide Detective Nick Miller arrives on the scene, it’s discovered the now-dead man was married to a cheating woman who goes by the unlikely name of Virginia Gamble.

Mrs. Gamble, it turns out, is teaching English at a local private boys’ school called Catholic Brother’s Academy, where it’s alleged she’s been having sex with several of the underage boys. Miller wants Moonlight to look into Virginia Gamble to determine if she managed to drive her husband to suicide—a major crime in New York State.

Thinking the case is easy money, what Moonlight doesn’t realize is that he’s about to open a can of worms that not only implicates the private school and its principal but also angers Gamble’s Mexican cartel, drug-dealing boyfriend, who vows to kill every man and boy she’s ever slept with. The thing is, not even Moonlight can resist Virginia Gamble’s beauty and charm, which ends up placing him at the very top of the to-be-killed list.

The bullets are flying, the atmosphere is searing hot, and a luscious blonde is wreaking havoc on the concrete jungle in this brand-new Dick Moonlight PI Thriller. But then, what else would you expect? For fans of Michael Connelly, Charlie Houston, Robert B. Parker, Ace Atkins, and more, New York Times and USA Today bestselling Thriller and Shamus Award-winning author Vincent Zandri delivers yet another killer thriller you just might stay up all night to binge. 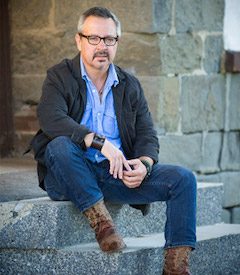 Which took shape first: plot, character, or setting?
The character was based on the story of a woman who actually did have sex with underage students at a local Albany private boys’ school. The setting and the circumstances are largely lifted from fact, while the Mexican cartel connection is fiction.

What attracts you to this book’s genre?
Hardboiled mystery is take-no-prisoners, kick-ass fun.

Winner of the 2015 PWA Shamus Award and the 2015 ITW Thriller Award for Best Original Paperback Novel for Moonlight Weeps, Vincent Zandri is the New York Times, USA Today, and Amazon Kindle No.1 bestselling author of more than seventy novels and novellas including The Remains, The Shroud Key, The Embalmer, and The Girl Who Wasn’t There. His list of domestic publishers includes Delacorte, Dell, Down & Out Books, Thomas & Mercer, and Polis Books. An MFA in Writing graduate of Vermont College, his work is translated into Dutch, Russian, French, Italian, and Japanese. Having sold close to one million editions of his books, Zandri was also the subject of a major feature by the New York Times. He has also made appearances on Bloomberg TV and the Fox News network. Suspense Magazine named Zandri’s The Shroud Key as one of the “Best Books of 2014.” Suspense Magazine also selected When Shadows Come as one of the “Best Books of 2016.” A freelance photojournalist and the host of the YouTube channel, The Writer’s Life, Zandri has written for Living Ready Magazine, New York Newsday, Hudson Valley Magazine, The Times Union (Albany), Game & Fish Magazine, and many more. He also writes regularly for Scalefluence and Strategy Magazine. He lives in Albany, New York, and Florence, Italy.