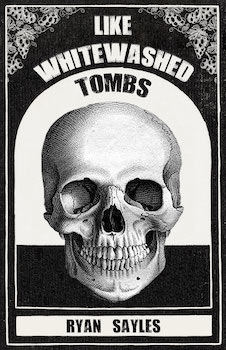 In the city of Rigid Creek, ugly things have come to blot out the light.

Corporal Joshua Marks struggles with his place in life. Widowed, months from retirement, called to the priesthood. His partner, Officer Bale Hammond, is burned-out, unsatisfied, tortured.

A man robs a liquor store for some quick cash and winds up with two dead bodies on the floor. The murderer escapes, only to be squeezed by both his dealer and his loan shark for more. Always more.

A fantastic storm on Halloween. Carnage. Failures. Corporal Marks looks at his world crashing around him, wanting to save his partner from his self-induced downward spiral. Officer Hammond wants to fix his broken life but only has broken tools to use.

Both men want redemption, but violence keeps getting in the way.

Ryan Sayles took a few minutes to speak to The Big Thrill about his new crime fiction novel, LIKE WHITEWASHED TOMBS: 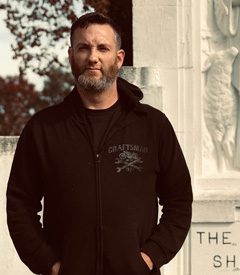 Which took shape first: plot, character, or setting?
It started with a basic sketch of the plot. The characters filled in just enough from there to where I could start writing with a rather blurry direction to follow. It took a much different shape as the novel expanded but, in the end, I was very happy with it. I really thought it was going to be more about one of the two main characters, but as it kept going, it really became about the other one. I had to go back in after the first draft and fill out more for the original lead character.

What attracts you to this book’s genre?
Crime is a great character study. It’s a great reflection of the struggle of humanity. It’s a great medium to show bad people trying to be better and good people falling short. Those conditions make for compelling stories.

Ryan Sayles is the Derringer-nominated author of the Richard Dean Buckner hardboiled PI series, The Subtle Art of Brutality, Warpath, and Albatross as well as the standalone novels Goldfinches and Together They Were Crimson. His short fiction has appeared in dozens of venues in both print and digital media. He was the editor of the clown-themed anthology Greasepaint & .45s and has been included in numerous others such as the Anthony Award-nominated Trouble in the Heartland: Crime Fiction Inspired by the Songs of Bruce Springsteen and Unloaded: Crime Writers Writing Without Guns.