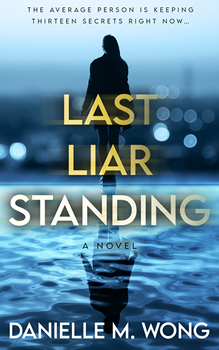 Vonny Kwan wakes up in a Nevada hospital, the victim of a hit-and-run accident she doesn’t remember. As she struggles to recover from her injuries, she learns that she also has no memory of the past nine years, including her marriage and what she was even doing in the West.

While she’s still reeling from the shock of her amnesia, two detectives visit and inform her that her husband, John, was recently murdered. As more information comes to light, Vonny grows increasingly suspicious of everyone around her.

Vonny realizes she must piece together the last decade to uncover the truth. The missing chunk of time holds secrets about the person she became, the mysterious man she fell for, and the life she never wanted.

The Big Thrill had a chance to catch up with award-winning author Danielle M. Wong for a quick chat about her latest thriller, LAST LIAR STANDING:

I adore thrillers for their fast pacing and zigzagging plots. It’s a true joy to devour these books while trying to anticipate every twist and turn. Although I love guessing the big reveal as a story’s end approaches, shocking finales are the absolute best!

Penning LAST LIAR STANDING was an exhilarating process, from initial brainstorm to final draft. It also felt worlds different from writing my debut novel, SWEARING OFF STARS, a historical fiction story. Tackling a new genre was tricky to say the least! Creating the proper pacing required for a thriller proved to be more of a challenge than I was expecting, but it also presented a formative opportunity to grow as an author.

The characters in this novel began speaking to me well before I developed the plot of LAST LIAR STANDING. I felt like a conduit during much of the writing process, transferring their words onto the page and trying my best to do their story justice.

Danielle M. Wong is a bicoastal author with a permanent case of wanderlust. She began traveling at a young age and never looked back. Each place possessed a singular kind of thrill and sparked a unique feeling—a sentiment she aspired to immortalize through her writing. An extended visit abroad inspired Danielle’s debut novel, Swearing Off Stars. The book was published to critical acclaim, garnering an Independent Press Award, a Benjamin Franklin Award, and an International Book Award, among others.

Author by day and reader by night, Danielle enjoys creating and consuming all forms of media. Her work has appeared in Harper’s Bazaar, HuffPost, PopSugar, and Writer’s Digest. She has stories published in the Chicken Soup for the Soul and Be the Star You Are series and is currently writing her next novel.