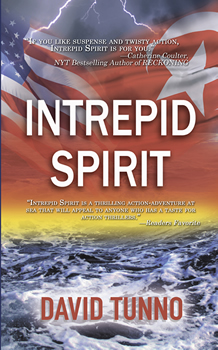 Onboard is the alluring but high-spirited Dr. Miriam Hannah. She’s a naval historian and the top aide to Vice President Virginia Mitchell, point person on the peace talks. A battle of the sexes ensues between the mutually attracted but conflicted lovers.

While terrorists abduct VP Mitchell in a plot to destroy the talks and ignite a world-wide jihad, the haunted Constitution mysteriously intervenes in Redding’s personal transformation. He returns the favor by ordering the crew trained in her antique weapons, unaware how vital that soon will be.

I discovered a letter written by Thomas Jefferson regarding his dealings with the Muslim ambassador to Great Britain that presaged the US’s war against the Barbary Coast pirates that tied the past to the present. I discovered a great deal about the Muslim faith and Sharia law that contributed greatly to the authenticity of the story, such as their conflicted views on astrology, for example. I also discovered the frightening fact that there are nearly 100 Islamic terrorist organizations operating in the US and about the same in Europe.

It’s the same as my attraction to action-adventure movies. Nothing turns pages faster than a good adventure story.

A chief goal was to write an authentic story, one with a significant and timely geopolitical component. That necessitates a great deal of research, including the history of the ship, all aspects of its construction, operation, and the operation of its artillery, but since the villains in the story are Islamic terrorists, that also required research into that religion, including the Q’uran and Muhamad’s Hadith and America’s history of conflicts with them, as well as terrorist groups that go by many names, their goals and their actions around the world. The historic twist of the story, as I’ve described it, is that it is as though the conflict that prompted the Barbary Coast war, the reason the USS Constitution was built, never ended and is ongoing.

The opportunity I tried to take was to write an action-adventure thriller with upmarket elements that would result in a story that would stick with the reader long after the last page was turned. The ship is something special and is believed to be haunted. That presented an opportunity to make it a supernatural character. Together with giving the main characters greater depth and complexity, I think the yarn is more memorable as a result.

Most action-adventure novels fall in the strictly “commercial” category. Why didn’t you follow that norm?

What would be the point? Where is the challenge in that? I don’t want to be one of the many authors in this genre who publish dozens of books. I don’t think I have that many stories in me to begin with, but whatever I do write, I want it to be distinctive and memorable.

Readers of books in this genre are going to find that what distinguishes INTREPID SPIRIT, while including all the action they could hope for, is that it’s also often touching, uplifting, heartbreaking—and pretty damned funny. For those, like myself, who have read many novels in the genre and can’t name the main characters a few days later, I think they will find this novel is very different in that respect.

Jules Verne. Talk about an action-adventure book that sticks with you, I read Mysterious Island in junior high and never forgot it. He made the improbable believable. That’s what I hope I have done with INTREPID SPIRIT.

David Tunno recently retired from a 30-year career as a trial consultant. He was a television commentator for several high-profile cases, including O.J. Simpson, the Unabomber, and Michael Jackson. He holds a BA in theater and an MA in communications. He’s a former S.A.G. actor with stage, film, and TV acting experience and a radio news director/announcer. He’s a pilot and sailor with blue water and racing experience and a W.G.A. affiliated screenwriter. INTREPID SPIRIT is the novelization of one of his screenplays.