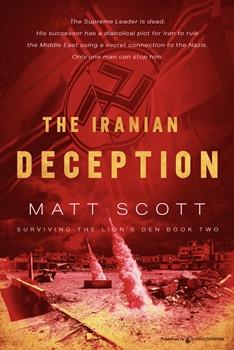 The Supreme Leader is dead. His successor is named within three hours. When Pakistan seemingly attacks a US embassy and civilian targets in India, one man has to discover the roots of the attacks before the new Supreme Leader introduces a diabolical plot for Iran to rule the Middle East using a secret connection to the Nazis.

I hope that readers will continue to learn about the inner workings of Iran as well as enjoy the journey I take them on around the country while also having a little bit of fun with the secret and unique connection to the Nazis that I came up with. My first novel, Surviving the Lion’s Den, got readers in the door. THE IRANIAN DECEPTION will have them buckling their seatbelts for non-stop action and political backstabbing!

I grew up on the novels of Vince Flynn, who I still regard as The Godfather of the genre. From there, I branched out into the worlds of Brad Thor, Joel C. Rosenberg, Jack Carr, Mark Greaney, and Don Bentley. Having studied under former Director of the Defense Intelligence Agency General Sam Wilson, it was a natural fit for me to follow in their footsteps,

The spy thriller genre is a machine that never stops because as long as there is twisted, manipulative politicians in the world who are constantly grabbing for power, there will always be secretive operatives looking to stop them. THE IRANIAN DECEPTION examines what Iran may look like if an even more narcissistic leader succeeds the current Supreme Leader and also asks some big questions about the depths to which Iran will go to become a major player on the international stage.

When you study the Ayatollah regime today, I feel that Hitler’s visit to Tehran in 1936 hasn’t received the type of examination and coverage that it should because he provided the reigning Shah at the time with thousands of volumes of documents about how he built Nazi Germany. Most of these documents were obtained after World War II, but what if some went missing? And what if those same documents contained handwritten notes from Josef Mengele regarding his mind control experiments? How would the new Ayatollah regime use them to their advantage?

In the first novel, I made Kirk Kurruthers the main character because I needed a likable, everyday man to take the readers on a journey through Iran. His personal story kept the readers vested and turning the pages. But I felt like I’d taken his story as far as it could go. Readers will still see Kirk featured in THE IRANIAN DECEPTION, but I’ve decided to switch gears and make Ben Thrasher the main character. This is a guy who has a lot of emotional issues and never really shed his guilt over failing in his first mission in Surviving the Lion’s Den. He was a ton of fun to write, and there so many opportunities for him. I think the readers are really going to like him.

The phenomenon of Dan Brown’s The Da Vinci Code brought me back to the world of reading, but Vince Flynn made sure that I stayed there. Every word of my novels that I hammered out of the keyboard were done in the spirit of asking, “Would Vince be proud of this?” Since his passing, the novels of Brad Thor, Joel C. Rosenberg, and Jack Carr have a solid reservation on my bookshelf, but there will never be another Vince Flynn,

Q: Is there any end to the Nazis’ contribution of evil in the world?

A: We should all learn from history so that we may never be doomed to repeat it, but we should also be aware that there will always be those that want to follow in their footsteps, and the threat of that is incredibly real.

Matt has a bachelor’s degree from Hampden-Sydney College, a liberal arts institution in Virginia, where he majored in history and political science. He had the honor of studying under former Director of the Defense Intelligence Agency General Sam Wilson. After moving from the Hampton Roads area in 2006, Matt now lives in Charlotte, NC with his wife and their golden retriever, Clarence. His debut novel, Surviving the Lion’s Den, was the first of a three-book planned series. It was released in October 2021. The sequel, The IRANIAN DECEPTION, will be released in June 2022. The final installment, The Ayatollah Takedown, will be released in 2023.