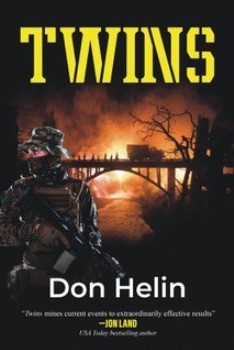 A member of the Patriots’ militia sets fire to a library in central Pennsylvania and kills the sheriff who tries to stop him. French operatives infiltrate into the United States from Canada to hack into national computer systems, then use their skills to spread disinformation. Is there a relationship between these two events? The president’s national security advisor dispatches Colonel Zack Kelly and a small team to evaluate the possibility of a terrorist attack. What they discover is a bombing plot worse than the disaster in Oklahoma City which killed 168 people. Can Zack and his team stop this nightmare before it’s too late?

What authors or books have influenced you during your career?

I was fortunate to join International Thriller Writers shortly after I published my first novel and became a debut author. Lee Child was the board representative for the ITW faculty and gave generously of his time to the class as did a number of other top ITW authors. What a wonderful opportunity. Actually, Lee was the one who gave me the idea for my series character, Zack Kelly.

The many classes I attended at ThrillerFest were very helpful. Jon Land has been a big influence on my career and has helped me market my books.

What are you doing to promote your books?

My first step is to update my website and order bookmarks as key tools in my marketing campaign. I have found The Big Thrill an important tool in reaching out to readers.
I am an active member of Pennwriters here in Pennsylvania, which has been very helpful in getting the word out. Also, I find social media, particularly Facebook, to be helpful in marketing.

I hear so many wonderful and fascinating stories from friends. I am teaching a class on how to write a memoir. My publisher and I released an anthology, Voices from the Pandemic, in 2021 with 32 memoirs which received a Readers Favorite Award and a New York Book Festival Award. I released my own memoir, From Army Regulations to Novels, A Writers Journey, this past fall.

The pandemic has kept my wife and me close to home over the past two years. During that time, we primarily did outside things, hiking, biking, and birding. Now that things are opening up, we look forward to trips to Texas to visit family as well as visits here in Pennsylvania. And it’s great to start book signings again.

During his time in the military, Don Helin served at a number of stateside posts as well as overseas in Vietnam and Germany. He is the author of eight thrillers that draw from his military experience, including three tours in the Pentagon.

His novel Secret Assault was selected as the Best Thriller at the 2015 Indie Book Awards. His novel Long Walk Home received a Five Star review at Readers Favorite Awards, and his thriller Missing won an honorable mention at the Paris Book Festival. Don is the editor of the anthology Voices from the Pandemic, describing the impact the pandemic has had on so many lives.

Don is a member of International Thriller Writers, Pennwriters, a statewide writer’s group in Pennsylvania, and is a mentor with the Mystery Writers of America.