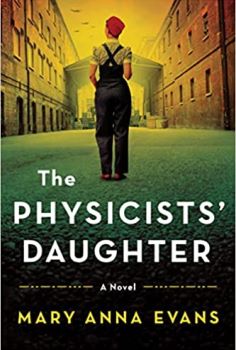 New Orleans, 1944. Sabotage–that’s the word on factory worker Justine Byrne’s mind. Raised by her late parents to think logically, she can’t help wondering what the oddly shaped carbon gadgets she assembles day after day have to do with the boats the factory builds. When a crane inexplicably crashes to the factory floor, leaving a woman dead, Justine can no longer ignore her nagging fear that German spies are at work, trying to put the factory and its workers out of commission. Unable to trust anyone, not the charming men vying for her attention, not her unpleasant boss, and not even the women who work beside her, Justine draws on the legacy of her unconventional upbringing to protect her coworkers, her country, and herself from a war that is suddenly very close to home. The Nazis are no match for the physicists’ daughter.

When I visited the National WWII Museum in New Orleans, I was struck by the emotional power of its exhibits, but I was also curious about its location. Why would a museum dedicated to WWII be located in New Orleans, instead of, for example, Washington DC? I learned that the factory where the famous boats used for the landings on D-Day were manufactured in New Orleans, in the very building where the museum is housed. I also learned that Eisenhower referred to Andrew Higgins, who designed those boats and owned several munitions factories in the New Orleans area, as “the man who won the war.” Once I knew those things, I knew that there was a story to be told about the Higgins plants in New Orleans. The characters and plot came naturally from the book’s setting.

I have always loved history. I’ve explored that interest for nearly twenty years in my Faye Longchamp archaeological novels, but history has always been in the background in those stories. Faye’s archaeological work was focused on history, but her life and the mysteries took place in the present day. Writing THE PHYSICISTS’ DAUGHTER gave me a chance to fully immerse myself in a fascinating place and time.

I think the biggest challenge in writing a historical novel is always going to be convincing the reader that they have traveled in time. I was not alive in 1944, so creating a convincing fictional world required a lot of research. I did, however, spend time when I was young with people who lived through WWII, and it helped me to remember their speech patterns and world views when I created my characters.

The biggest opportunity was getting the chance to let my scientist’s freak flag fly! My bachelor’s degree is in engineering physics and my master’s degree is in chemical engineering. I really enjoyed learning about the science of the mid-twentieth century and doing my best to communicate it to modern lay readers.

Higgins Industries, the real-life company that is the backdrop for my fictional story, paid Black people and women the same salary they paid White men during WWII. This was not ordinary in the United States at that time, and it may have been unprecedented in New Orleans.

I can’t tell you what Justine and her friends were building in Higgins Industries’ Carbon Division that attracted the attention of a spy, but it is based on a real-life product manufactured at Higgins that had world-shaking ramifications. The people who worked on the project were sworn to secrecy. Most of them never learned that their work was declassified, so they took the details to the grave, but we have some photos and a bit of oral history that helps put some of the pieces together. I’m an engineer, so I became a little obsessed with learning as much as I could. In the process, I found detailed documents and drawings that were so secret in 1944 that revealing them would probably have been a capital crime. Now, they’re available to anyone with an internet connection. When I look at them, I try to imagine what the engineers who prepared them would think about the internet and its ability to put nearly unlimited information in our hands.

In my day job as an academic, I do research on the work of Agatha Christie. Because she is known for her mysteries, many people don’t realize that she was also a prolific author of thrillers, romances, literary novels, short stories, and more. Her work is a continual inspiration.

Q: What do you consider the novelist’s secret weapon?

A: Information control is the novelist’s secret weapon. We all can recognize the dreaded infodump that slows a story’s all-important introduction, but I think we sometimes forget that moving that information out of the beginning of the book requires us to plan its structure. People turn the pages because they want to know more. If a writer is strategic about what is revealed and when, readers turn the pages a lot faster.

Mary Anna Evans is the author of two thrillers, THE PHYSICISTS’ DAUGHTER and Wounded Earth, and thirteen Faye Longchamp archaeological mysteries. Her work has earned recognition including the Benjamin Franklin Award, the Will Rogers Medallion Award Gold Medal, and the Oklahoma Book Award. She is an associate professor at the University of Oklahoma, where she teaches nonfiction and fiction writing, including mystery and suspense. She holds an MFA in creative writing from Rutgers-Camden and she is a licensed professional engineer. The Bloomsbury Handbook to Agatha Christie, co-edited with JC Bernthal, and THE PHYSICISTS’ DAUGHTER will be published in 2022.

What They Don't Know by Susan Furlong