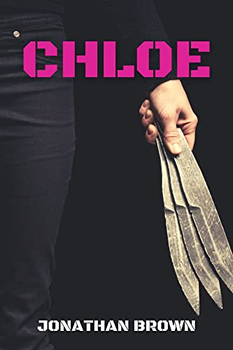 Jonathan Brown’s Chloe, the title character in his new novel, was far too young when her father died, leaving her to care for her alcoholic mother.

And now, Bucksville’s beloved sheriff Jim Boulder, both friend and mentor to Chloe, is in trouble. Men with bad intentions are gunning for him, and despite several warnings, Chloe is going to help. She is beautiful, intelligent, resourceful and dogged, but her youthful confidence puts her in the crosshairs of the sheriff’s enemies. Only time will tell if Chloe’s knife wielding skills, a feisty horse named Rusty, and the help of “Officer Bad Ass”—Deputy Raven Tawanna—will be enough. The trouble is time is in short supply.

We asked Brown—noted tough guy writer of the Lou Crasher series—why he chose to write a novel with a female protagonist.

“A thousand years ago,” he says, “when I was in high school, I had a gorgeous girlfriend. She was out of my league and had the eye of many guys and, sadly, lots of men. As tenth grader dudes, we see beautiful girls practically as celebrities. They have older boyfriends with cars, and teachers and parents treat them differently. One afternoon while walking home from school, an older boy hit on her like I wasn’t even there. He was a known scrapper, and although I was ready to defend her honor, I knew I’d get my ass beaten pretty bad. What hit me harder was how visibly uncomfortable my girlfriend was. I’d never seen these celebrity types even feel such a thing. It was the first time I witnessed a ‘gal with it all’ suffering the effects of unwanted male attention. Me and the A-hole had words, but it never came to blows.

“From that day, my gal and I had plenty of dialogue on the situation and others like it in her life. That was when I decided I’d highlight the young woman’s or adult woman’s perspective on the issue. I’ve always admired strong women and write strong female characters in my books. But it was time, time for me to give the woman a chance to lead. Let Chloe tell her story and kick a whole lotta ass along the way. I have a three-book deal of standalones with Level Best Books, and I insisted that the contract read ‘Bad ass women series.’ There are two more books coming with two more ass-kicking dames. The books are outlined and ready to rock!”

There’s more than just a touch of the western novel in CHLOE. It’s a genre Brown has some experience with.

“Ever since Daddy-O took me to Western movies in the 1970s, I’ve been in love with the genre,” he says. “I’ve been working on a Western for about two years about a Black wrangler who’s got hopes of moving up to the rank of cowboy during a cattle drive. Most of the writing has been cerebral as opposed to at the laptop. After reading CHLOE, my editor, Shawn Reilly Simmons, said, ‘At times this feels like a Western.’ And now you’ve put this brilliant question to me. This tells me that I’ve hit my target. I see CHLOE as a combination of dipping-of-the-toe into the genre and an homage to the genre.”

Brown usually writes his novels in the big city of Los Angeles. Why the small town this time around?

“I tossed in the obvious,” he says. “Modern-day small town with a horse culture, a sheriff with deputies, and Chloe’s connection to a feisty horse. But in her pursuit to set things right, she’s almost more sheriff than the actual sheriff. Whether we’re talking a lone PI who follows clues until determining who killed the woman in the red dress or the lone sheriff who riddles out who robbed the stagecoach, the similarities abound. The sheriff peacefully walks the town’s boardwalks until a misdeed takes him into the world of the outlaw. Chloe’s world is that of a high schooler on the brink of graduation until she plunges into the world of gun-toting bad actors—alone. I figured out who Chloe was, built a world around her, and set her off after the bad guys. It wasn’t until well into the book that I began to see the Western connection. It’s a beautiful thing when our writing exploration uncovers themes not intentionally sought.”

At times, Chloe seems to speak directly to the reader. Why?

“From the outset, I wanted to go with first person, past tense,” Brown says. “I wanted the reader to be at Chloe’s side, if not on her shoulder, as voyeur. I thought it’d be a great tool to bring the reader closer to the character in an almost ‘Come-here-I-want-to-tell-you-a-secret’ sort of way. As a drummer, I use both feet and hands all at once. It’s my armchair theory as to why I write two books at the same time—chaotic multi-tasking. My Lou Crasher series is about a rock and roll drummer turned amateur PI. In my upcoming book, Drums, Guns and Money (Down & Out Books), Lou speaks to the reader at times. The technique is more prevalent in CHLOE. Visualize a high school senior with a vlog or TikTok video updates. In almost every book, I try something new. I love a challenge because challenges make us better. When I studied hapkido (Korean karate), there was certainly repetition, but there were always new kicks, strikes, blocks etc. In the beginning it can be a rough go, but after a while you move toward mastery. Emphasis on ‘toward’!”

CHLOE is a short novel, approximately 60,000 words. We asked Brown if he has a word or page count in mind when he starts a novel.

“In the beginning,” he says, “I was a word count guy. A hundred thousand words was like the 26 miles of a marathon and dammit, I was crossing that line. That’s what I did for my first two self-published books (Crescendo and Drumroll Please). As I matured as a writer, I dug into content. Tell the story and count the words later. Just as we try and use the right amount of words when telling a story orally, I do the same with the written story. I loosened the reins and let the story dictate the word count. My next two books came in around 60K each, and I believe the count was sufficient for the tales to be told.

“CHLOE is short for a few reasons,” he says. “She is the narrator, and we hear a lot of her inner dialogue. I didn’t want that technique to drone on and get in the way of dialogue between characters. The story takes place just over a couple of days so, there again, no need for a high word count. Last, the shorter length moves the tempo along at a quicker pace plunging the reader into a fast-paced thriller type novel.

“All this jazz being said, my next Crasher book taps out at 85,000 words. Sharing the duties of story (the protagonist’s story) and storyteller (me) as pilot and co-pilot seems to be working for me these days.”

Finally, if Brown could put his dream panel together for ThrillerFest—participants need not still be breathing to get invited—who’d be on it, why, and what would the topic be?

“Okay,” Brown says, “I’ve got Water Moseley, Chester Himes, Dashiell Hammett, Raymond Chandler, Agatha Christie, and Robert E. Howard: a very male heavy list. That’s because I read these authors while still in my teens for the most part. A guy in his teens is full of hormones and testosterone, well…he reads dudes. At least I did. These authors had a profound effect on me. They didn’t urge me to write in those days because I was pursuing a drumming career. However, they never left me, and seared a dream of writing books someday into my subconscious. Howard is the outlier here as he penned the Conan, The Barbarian books. Obviously not mysteries, but Conan often had riddles to solve…before the killing began, so he makes it to the panel.”