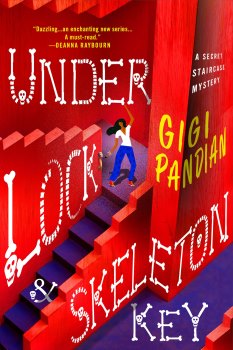 An impossible crime. A family legacy. The intrigue of hidden rooms and secret staircases.

Normally I’m a plotter, but for UNDER LOCK & SKELETON KEY, it was the heroine, Tempest Raj, who dictated the story.

Year ago, I wrote a short story featuring Tempest, and she stayed with me. She’s a stage magician who creates misdirection for a living, and I loved how she came alive on the page. For years, I didn’t know what to do with her, but she kept whispering in my ear. Finally, I decided to tell her story. 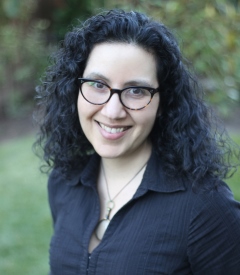 UNDER LOCK & SKELETON KEY is a locked-room mystery in the traditional sense, presenting a seemingly impossible crime with “fair play” clues. I’ve always loved mysteries from the Golden Age of detective fiction, and this book was my opportunity to pay homage to those puzzle plot novels I adore but bring that style into the 21st century with a multicultural cast based on my own family.

Traditional puzzle plot mysteries are so much fun when done well, because they work on multiple levels. The characters are fun to spend time with, including plenty of humorous banter, plus the clues are fairly presented yet ingeniously hidden, so it’s enjoyable to try to work out the solution and slap your forehead at the end when you realize the truth.
What was the biggest challenge this book presented? What about the biggest opportunity? I started writing this book six years ago. It was my 40th birthday, and a couple of years beforehand I’d survived a full year of cancer treatments and promised myself that if I made it through, I’d take my writers group on a spectacular writing retreat to celebrate my 40th. I rented a large flat in Edinburgh, Scotland, for my writers group to join me on a writing retreat. That’s where I began work on UNDER LOCK & SKELETON KEY.

The challenge was that because I was still experiencing the survivor’s mentality of wanting to do EVERYTHING, that included throwing every single idea I wanted to write into a single book. The result? A mess. It was way too big to be a single book.

I loved so many of the elements that I didn’t know how to fit them all together:

– Architectural misdirection (“What happens when a carpenter and a stage magician fall in love? They form a Secret Staircase Construction business to bring magic to people through their homes.”).
– Paying homage to writers from the Golden Age of detective fiction (“This is the Locked Room Library, a library for readers of classic detective fiction. She took The Three Coffins, aka The Hollow Man, from the bookshelf.”).
– A connection to both Scotland and India (a generations-long family curse born in South India and following the Raj family across the sea to Scotland).
– Stage magic (Tempest Raj is a disgraced illusionist who uses her insights into misdirection to solve a baffling impossible crime).

I worked on the book in fits and starts, until I realized I could use all the elements, but I needed to turn it into a series instead of a stand-alone. Each book in the series will include an impossible crime, and I’m having so much fun working on the next book right now.

Gigi Pandian is a USA Today bestselling and award-winning mystery author, breast cancer survivor, and accidental almost-vegan. The child of cultural anthropologists from New Mexico and the southern tip of India, she spent her childhood being dragged around the world on their research trips and now lives outside San Francisco. She writes the Jaya Jones Treasure Hunt mysteries, Accidental Alchemist mysteries, and she’s kicking off 2022 with her new Secret Staircase mystery series. She’s been awarded Agatha, Anthony, Lefty, and Derringer awards, and is a co-founder of Crime Writers of Color.