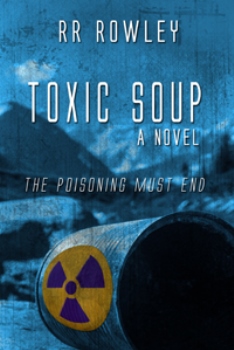 Toxic waste at the Hanford Nuclear Reservation has been poisoning the environment, human beings, and wildlife for more than six decades. When her brother dies a horrible death at Hanford, Casey Long, a kayaker and windsurfer by day and bartender by night in the Columbia River Gorge, Oregon/Washington, swears to put an end to the upriver contamination. But how can she possibly take on the entrenched fortress of a facility?

After she confides in Little Bear, a bitter Native American fisherman, they contrive a dangerous plan. Joined by a peculiar mishmash of collaborators, they risk everything to save the environment and achieve justice for all injured parties, past and present.

The setting, then plot.

In TOXIC SOUP, the genre allows me to show how Casey’s decisions reveal how darkness can influence morality, highlighting the suspense of her journey.

The biggest opportunity was to rage my distaste of nuclear waste.

I discovered the number of failures involved with containment of nuclear waste—the dereliction of duty by the DOE.

RR Rowley has lived coast to coast in the USA, in London, UK, and has spent many years on his farm in Grenada, West Indies. He has owned and operated several companies and was involved in start-ups. Currently, he resides in the Cascade Mountains of Washington State.