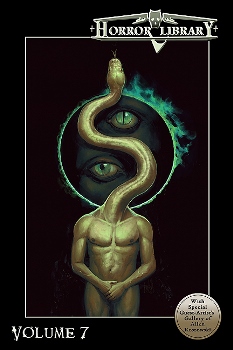 The +HORROR LIBRARY+ anthologies are internationally praised as a groundbreaking source of contemporary horror short fiction stories—relevant to the moment and stunning in impact—from leading authors of the macabre and darkly imaginative.

Filled with fears and fantasy. death and dark dreams. Monsters and mayhem. Literary vision and wonder. Each volume of the +HORROR LIBRARY+ series is packed with heart-pounding thrills and creepy contemplations as to what truly lurks among the shadows of the world(s) we live in.

Read VOLUME 7 in this ongoing anthology series, and then continue with the other volumes.

Shamble no longer through the banal humdrum of normalcy but ENTER THE HORROR LIBRARY!

The excitement, the thrills. The strange. The emotional resonance. The imaginative. I love monsters and explorations of fear, but I also love literary accouterments and beautiful storylines, which is an ideal (to me) in this genre.

My earliest media influences were Twilight Zone, Jack London, Stephen King, and vigilante-style comic books, and because of that I tend to write with the same sort of blended literary and thriller audience in mind.

Q: What attracts you to this book’s genre?

A: The excitement, the thrills. The strange. The emotional resonance. The imaginative. I love monsters and explorations of fear, but I also love literary accouterments and beautiful storylines, which is an ideal (to me) in this genre.

Eric J. Guignard is a writer and editor of dark and speculative fiction, operating from the shadowy outskirts of Los Angeles, where he also runs the small press, Dark Moon Books. He’s twice won the Bram Stoker Award, been a finalist for the International Thriller Writers Award, and is a multi-nominee of the Pushcart Prize.

He has over one hundred stories and non-fiction author credits appearing in publications around the world. As an editor, Eric’s published multiple fiction anthologies, including his most recent, Pop the Clutch: Thrilling Tales of Rockabilly, Monsters, and Hot Rod Horror; and A World of Horror, a showcase of international horror short fiction.