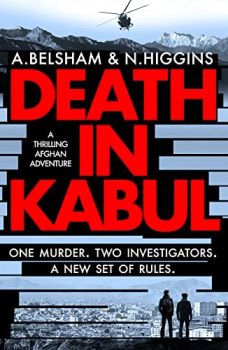 2003. Kabul has become a frontier city, Afghanistan’s fledgling democracy struggling with crime and corruption as NATO coalition troops, gangs, and warlords jostle for control. A city where justice is an idea and security means carrying a gun.

When the body of a British serviceman is discovered in the city’s infamous tank graveyard, the Kabul Police reach out for support in their investigation. Alasdair ‘Mac’ MacKenzie, formerly of the Metropolitan Police, is seconded to the team.

Baz Khan, an Afghan-American investigative journalist, is in Kabul researching a story. Precious antiquities, priceless artefacts of the country’s rich history, are disappearing amid the chaos, never to be seen again. Baz is determined to uncover whoever is spiriting them away, to prevent her war-torn country being further denuded for profit. And she has a lead…

The soldier’s death was no accident. Why was he so far from the British base in the middle of the night? And alone? As Baz and Mac investigate, they quickly realise they have each stumbled onto something far bigger than they reckoned with, and they are tossed into the Kabul underworld, where violence and corruption rule.

For this book, it was definitely the setting. Thinking about my brother’s time living in Afghanistan, I realised that this would offer a unique insight into a country that few people get to visit. Collaborating on a crime/action thriller set in Kabul has been a dream project and an absolute pleasure to write. 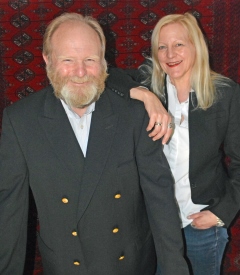 DEATH IN KABUL kicks off with the murder of a British soldier in the city’s notorious tank graveyard. Having written police procedurals set in the UK, the challenge here was for my character to carry out a murder investigation without any of the usual forensic capabilities, in a country where he doesn’t speak the language or know the customs—a challenge for me too as a writer!

Writing in collaboration with my brother who has lived in Afghanistan, I learned a huge amount about this fascinating and troubled country. I spent literally hours poring over maps, studying photographs, reading books written by Afghans and set in Afghanistan, and talking to my brother about his experiences there. It opened my eyes to a nation and culture beyond the tragic headlines, and I hope we’ve done justice to this in our book.

When the idea first sprang to mind of writing a book with my brother, I wondered if we could manage it and remain friends by the end! However, it seems we work well together as a team, sharing ideas and taking on board each other’s suggestions. It means being unselfish as a writer and sometimes compromising, but the benefits of two imaginations at work are amazing!

Alison is the author of the internationally acclaimed Tattoo Thief trilogy, which has been translated into 15 languages and was a No. 1 bestseller in Italy. As well as writing crime, she is collaborating with her brother Nick Higgins on an action thriller series set in Afghanistan. She is a co-founder of the Edinburgh Writers’ Forum, providing professional development and networking for writers.

From 2003 to 2007, Nick worked in Afghanistan as a security advisor on a variety of projects encompassing the UN, private military companies, the US Embassy, and others. He has lived in or visited all the locations mentioned, including Lashkar Gah City in Helmand Province, nearly three months in a guest house in downtown Kandahar City, Herat City, and Kabul.