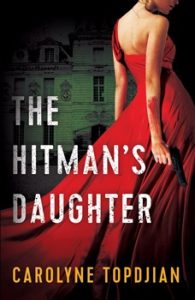 Hotel employee Mave Michael is trapped during a blizzard on New Year’s Eve in a remote and formerly grand haunted hotel. When Mave finds the hotel’s eccentric resident artist murdered, her past as the daughter of a hitman is revealed—making her the perfect scapegoat. Framed for the crime, she can no longer deny the lessons in survival her father taught her or ignore her uncanny sixth sense in finding lost objects. To save herself, she not only has to stop running from her own past, but she must also unearth the history of the hotel, its elite guests and buried secrets—one deadly sin at a time.

I’m particularly sensitive to the victimization of women in crime fiction, and more generally, in Western media and entertainment. Its often-unspoken name is men’s violence. It’s become so commonplace; we barely bat an eyelid anymore. The great thing about ghost stories it that they can reclaim some of the power stripped by representations of victimization. So, I hope readers will find THE HITMAN’S DAUGHTER offers them a thrilling, feminist slant on crime fiction—an escape from real-life horror, where the strength of women is highlighted.

For as long as I can remember, gothic fiction has drawn me in both as a reader and as a writer. From Shirley Jackson to Charlotte Brontë to Toni Morrison, I have a deep, dark love of gothic settings and plotlines—ghost stories in particular. For me, writing gothic mystery is less about telling a scary story, and more about creating an uncanny one for readers to reflect on. A good gothic story stays with you long after you’ve put it down. It’s that ambiguous yet visceral atmosphere and plotting—it leaves me inspired and full of mind-bending questions!

We’ve all heard how lonely writing can be; but to cite the old cliché, it truly takes a village to write a novel and to see it through to publication. Drafting THE HITMAN’S DAUGHTER from rough idea to polished page allowed me to meet many new amazing authors and connect with others in the publishing community. Organizations like Sisters in Crime and ITW, especially its Debut Authors Program, have been wonderful discoveries for me. I’m super grateful for their support and camaraderie.

I wanted to create a likeable character in a dark genre. It seems likeable characters are mostly reserved for cozy mysteries, while suspense and gothic fiction feature protagonists with deep dysfunctions, violent tendencies, or either self-destructive or self-serving vices. Mave Michael has no shortage of issues and vulnerabilities, but she’s kind to others, grounded in herself, and she uses violence only as a last resort, even though (thanks to her father) she’s skilled in mixed martial arts. Also, as a small woman, her physical size is not her downfall; men can’t easily dominate or “handle” her, and this was important for me to highlight. In this way, I wanted to banish the trope of the damsel in distress in gothic fiction. Mave Michael is very much in command of her own fate.

The storyline is inspired by real-life events and places. It draws on a historical chateau/grand hotel that, till this day, is rumored to be haunted. That same hotel also had a famous resident artist who lived and practiced at the chateau. Granted, the artist was not murdered in real life, and I obviously took many creative liberties in my fictional work! That being said, the real chateau does feature a hidden and barred-up train station…

As early as 13, I was reading a ton of Stephen King novels, as well as YA thrillers by R.L. Stine and Christopher Pike. I used to love escaping into these suspenseful, speculative-mystery mashups. King, Pike, and Stine introduced me to the suspense genre and set a foundation for me. In terms of early gothic influences, I was captivated by Bram Stoker’s Dracula and The Phantom of the Opera by Gaston Leroux. Later on, my reading grew more diverse and cross-genre. I picked up Charlaine Harris, Toni Morrison, Sarah Waters, N.K. Jemisin, Ruth Ware, and Chris Bohjalian. All of these authors introduced me to new, brilliant ways of storytelling and have been pivotal in helping me grow as a writer.

Is there a question that you feel is important to you or your novel? Write it in below but be sure to answer it too!

A question I ask myself is how we can encourage more thoughtful, diverse, and empowering representations of marginalized identities and gender in crime fiction. I have no easy answer because it’s not an easy task. It’s an uphill battle. There are solid organizations like Crime Writers of Color, Queer Writers of Crime, and Sisters in Crime asking similar questions. In a lot of ways, we can only tackle it one story at a time.

Carolyne Topdjian is the author of THE HITMAN’S DAUGHTER, from Agora/Polis Books. She has published in PRISM International, Dreamers Magazine and Firewords Quarterly and is a professor in the Faculty of Media and Creative Arts at Humber College in Toronto. A three-time Pitch Wars mentor, she lives in a 113-year-old haunted house.