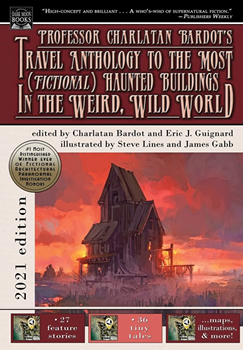 You find yourself at a campfire, abruptly and without warning. It was summer this morning but now, entering into the evening, a chill autumn wind nips at the back of your neck as it pushes the smoke away from you and into the woods. How did you get here?

A log in the fire snaps in half, sending flickering embers skyward, bringing your startled eyes forward. A man’s laugh to your left. You turn to meet this stranger—friend or foe?—and see the most unexpected sight: the famed Professor Charlatan Bardot.

“You’re early,” he tells you, his voice carrying a hint of some unplaceable accent. “The rest will be here soon.” Rummaging in his pockets, he pulls out a long pipe and lights it. “May I sit?”

You nod. Of course you nod. Who would—or could?—say no to the great Bardot?

As the heavy perfume of his pipe threads through the clearing and overpowers the woodsmoke, they come wandering out of the woods. Some alone, some in pairs. They fill the seats around the fire, then stack up behind—rows and rows of bodies, shifting, breathing, warm bodies, eager to share their stories.

That’s not really what happens when you read PROFESSOR CHARLATAN BARDOT’S TRAVEL ANTHOLOGY TO THE MOST (FICTIONAL) HAUNTED BUILDINGS IN THE WEIRD, WILD WORLD. But it’s close. Very close.

What you have—or could have, for the right price—is a beautifully presented anthology of ghost stories from around the world by writers from around the world. These stories come with illustrations, maps, latitude and longitude, and individual introductions from Professor Bardot himself. (Imagine Rod Serling’s Twilight Zone openings, but instead it’s a widely traveled professor of the obscure and haunted.)

The whole thing flows. This isn’t your traditional anthology with a single 12-page introduction and a general theme for you to navigate yourself through. No, this is a guided journey through six continents with 27 short stories and 36 flash fiction tales. All ghost stories, but not a single haunted house among them—which is absolutely wild.

To discuss these unsettling, eerie, and mournful tales, The Big Thrill checked in with anthology co-editor Eric J. Guignard. (Unfortunately, Professor Charlatan Bardot was unavailable to join us—something about a paranormal event in Antarctica.)

What was it like working with Professor Charlatan Bardot? Was he an easy co-editor or was the publishing house a battleground?

Professor Bardot was—and continues to be—a close friend! I could not have done this without his insight and inspiration, although certainly there were creative differences. I can speak frankly and admit he originally envisioned this anthology to be an even greater multimedia affair than it is. We already have 63 authors involved, and he would have been content to triple that number, to make this a running series. Unfortunately, we both have time constraints—I have young children, and day jobs, and other life affairs, and he is much more involved in confidential affairs (presumably related to clandestine paranormal expeditions). There was a dream initially of international book tours and riding the talk show circuit, but alas as travel restrictions endure, I had to pull out, and Charlatan refused to do it without me.

This anthology clearly has so much work put into it. How long did it take to assemble? What was that process like, especially given that you have so many illustrations?

I started brainstorming this anthology in July 2020 and got it into publication November 2021. So backing out about two to two and a half months pre-production lead time, I spent about 13 months working on this, which was outlining, researching, author correspondence, editing, creating maps, working layout, designing cover and interiors, and a mass of other tasks. Besides the interior art, I’m a one-person publisher. But the art! The art, of course, is such a key component, bringing the stories to life.

And on that note, the illustrators who partnered with me for this book were both fantastic to work with. I’d worked with Steve Lines on books before, and he was the first person I discussed my idea with (besides the dear professor), as I wanted him to be part of it. Steve illustrated about half the book, and then unfortunately he passed away suddenly from COVID in March 2021, which was a huge heartbreak and a loss for the indie world, as he’d been involved in art, writing, and publishing for decades. In June, I was fortunate to connect with James Gabb and brought him into this project to complete the missing artwork. He picked up where Steve left off, was brilliant to work with, and together, their illustrations truly brought this book to life with the visual layering.

I began this while we were deep into the COVID pandemic with increasing quarantine orders falling around us. I was suffering cabin fever, especially with young children, being stuck at home all day, every day. I wanted to try something creatively different, something speaking to my need for escapism, and I was very much inspired by travel guidebook series such as Lonesome Planet and Footprint, which I’ve always adored. So tying that into dark fantasy/horror was a natural progression to create a travel guide of all those haunted (fictional) places we could only imagine to visit during quarantine.

What elements—to you—make a ghost story a good ghost story? What tropes do you find again and again that you wish writers would avoid or lean less heavily on?

A good ghost story must be emotionally relatable. There’s something in sadness to it, or hope, or even fear or thrills, but something that can be “felt.” Otherwise it loses its purpose. I’m also a great advocate for atmosphere in setting, to develop an environment—regardless of how fantastic—that can be (once again!) “felt,” that evokes ambience for the reader.

Tropes I wish writers would not lean on are those involving “shock value,” gore or violence for its sake alone. Naturally, too, as I focused in on this anthology, ghosts don’t need to be relegated to creepy domestic houses for their haunting purposes but may reside in any structure or natural element in the world.

Of course, also, the best ghost stories ignore all the rules and advice of other writers and create their own visionary creations!

Being the editor, you can’t have a favorite story—it’d be like choosing a favorite child—but what story do you feel best represents what you were hoping to achieve with the anthology? Why?

You’re definitely spot on there, as so many of the stories are “favorites” in different ways… like having multiple children, one may be a favorite for its voice, another may be a favorite for its vision. I might point to the opening story, “Oh Man’s Land” by Natalia Theodoridou as a top representation because—since it’s the opening story—I’ve probably read it the most times. It was also one of the first stories I acquired, so it helped set the tone to how I built out the remainder of the anthology, which was a very fluid, evolving process. Her story is smart, straightforward, resonant, and beautifully written.

Please tell me that there’s going to be a second anthology with Professor Charlatan Bardot. I need something to live for.

Haha, I will quote the old adage, “Never say no!” I’d originally envisioned some smaller companion pieces, but much of that had originally hinged on working with Steve. After his passing, it was hard to imagine continuing this, but James Gabb picked up wonderfully, so perhaps with him, or others, there may be future editions.

What are you working on currently?

And through SourceBooks I’m curating a series of books titled The Horror Writers Association Presents: Haunted Library of Horror Classics, reissuing classic novels with new introductions and other ancillary material.

Eric J. Guignard is a writer and editor of dark and speculative fiction, operating from the shadowy outskirts of Los Angeles, where he also runs the small press Dark Moon Books. He’s twice won the Bram Stoker Award, been a finalist for the International Thriller Writers Award, and is a multi-nominee of the Pushcart Prize.

He has over one hundred stories and non-fiction author credits appearing in publications around the world. As editor, Eric’s published multiple fiction anthologies, including his most recent, Pop the Clutch: Thrilling Tales of Rockabilly, Monsters, and Hot Rod Horrork and A World of Horror, a showcase of international horror short fiction.

Outside the glamorous and jet-setting world of indie fiction, Eric’s a technical writer and college professor, and he stumbles home each day to a wife, children, dogs, and a terrarium filled with mischievous beetles. Visit Eric on his website, his blog, and Twitter  (@ericjguignard).