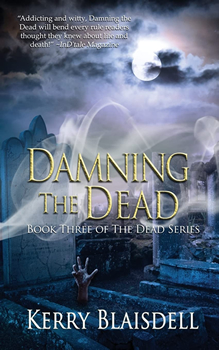 “I’m Hyacinth Finch, former graverobber, former antiques dealer—okay, I was a fence for the uber-rich backstabbing Marseille elite—and former dead person myself. But only for a few hours before reinhabiting my own corpse…”

Hyacinth Finch, the star of Kerry Blaisdell’s Dead series, has had an unusual year.

In book one, Debriefing the Dead, she was murdered by demons in France, resurrected by the Archangel Michael in Limbo, then speedboated to Turkey, where devilish and ghostly adventures ensued.

In book two, Waking the Dead, our heroine was kidnapped by a pair of literal Satan-worshipping Nazis and forced to use her new and unusual post-death talents to raise an army of thousands of undead Nazis which—as one might imagine—was a Very Bad Thing.

In the latest installment of the series, DAMNING THE DEAD, Hyacinth is surprised to find herself in charge of half the army of undead Nazis, who have decided that they don’t want to be Nazi-ing around anymore and that—maybe—Satan and/or all of his demons coming to Earth might be another Very Bad Thing.

When Notre Dame catches fire, revealing a relic that would give Satan more power, Hyacinth and her undead Nazi army must travel to Paris to retrieve the relic before the demons do.

In this interview with The Big Thrill, Blaisdell talks with us about changing genres, loving the quirky, and what makes Hyacinth Finch tick.

What was the initial spark that led you to create the Dead series?

I’d been writing romance novels for a few years and was feeling a bit stuck. I don’t write “traditional” romance, and I kept getting responses from agents and publishers that they loved my voice but didn’t think they could sell my books. It got to the point where I wasn’t writing at all, and I finally decided to just write the book I wanted to read. I gave myself permission to let whatever came out come out, and this is what happened.

As for the actual story idea, I just started thinking about Heaven and Hell and how most cultures have a figure who “shepherds” souls to the Afterlife. Something clicked, and I thought: Wouldn’t it be awful to be that person’s assistant and have that heavy responsibility? And then when I sat down to write, Hyacinth just popped onto the page and took over.

This series is your first foray into supernatural/paranormal suspense. What drew you to it?

I’ve always loved ghost stories and been fascinated by the supernatural and magic. I started out writing fantasy—my first completed novel was a very Tolkien-esque high fantasy that is currently gathering virtual dust bunnies under a virtual bed somewhere and will NEVER see the light of day again.

Plus, I’ve always been interested in quirky characters and plowing my own path, even when it’s not the most popular route. When I was little, my dad would write down stories for me, that I then illustrated. I still have one from when I was about four, about a princess who gets bored with the prince and runs off with the dragon instead. So that tells you where my true nature lies.

How did COVID-19 impact your experience as a writer? Did you learn anything new about yourself as a writer because of it?

Oy! So much happened over the last two years. Right before COVID-19, I was going through a very difficult time in my personal life, which was just barely starting to be resolved when the pandemic hit. Plus, I’m a teacher. One day we were talking about extending Spring Break by one week, “just in case,” and the next week I was suddenly teaching advanced high school math to middle school students from my dining room table, on Zoom, with my daughter trying to graduate high school, my son struggling to be safe at his job, my husband being an essential worker, and… it was just crazy difficult. But again, not all of it was COVID-19, and it’s hard to separate what caused the most difficulty.

Either way, DAMNING THE DEAD took me a really long time to finish—far longer than the previous two books or the one I’m working on now. Partly it was COVID-19 and personal stuff going on, and partly it was me not trusting my gut and agonizing over every scene. I’m always learning stuff about myself, both as a writer and just as a human. I’m a different person than I was in fall of 2019. But did COVID-19 do that, or would it have happened anyway? I don’t really know.

Hyacinth’s world is constantly being shaken by new revelations, but she always ends up taking them in stride. What is it about her that makes her so adaptable?

From an early age, she had to adapt and take care of herself. She didn’t have a stable childhood, so she made her own structure. But because it’s self-made, she can switch it up if she needs to—essentially, she made it, so she has no qualms about breaking it, whether or not that’s a good idea.

In your opinion, what is Hyacinth’s major character flaw? How does this flaw show up in her adventures?

Oh, I hate this question! Especially since Hyacinth just takes over and does things, and I can’t seem to rein her in. In fact, that might be her biggest flaw: She’s impulsive and does what she thinks is right, and damn the consequences. One of my readers recently said that what she loves about Hyacinth is that she “never loses sight of what matters.” I’d say that’s true, but it also creates problems for her, in every area of her life—er, death. She also feels responsible for everyone around her, which means she never puts herself first. That contributes to her snap decisions, because her first thought is always for what will keep Geordi safe, and not necessarily what that might do to her own safety, or really, anyone else’s.

Do you have a definitive end point for the series, or do you see Hyacinth’s adventures going on for several more books? Any hints on what’s next for Hyacinth?

Originally, I had planned a three-book series. Then Hyacinth went and did a bunch of things, in completely unexpected ways, and just complicated everything. So I’m two-thirds done with book four, and I know there will be at least one more book after that, maybe two or more. I don’t think the series will go on forever, as some do—it will end at some point. But so far, I don’t know where that point is because the characters keep changing it on me.

She also writes award-winning Romantic Suspense (Publish or Perish, a Publishers Weekly BookLife Prize Quarterfinalist) and Historical Mystery. She has a Bachelor of Arts from U.C. Berkeley in comparative literature (French/medieval English), and a Master’s in Teaching English and Advanced Mathematics from the University of Portland. Kerry lives in the gorgeous Pacific Northwest with her family, assorted cats and dogs, and more hot pepper plants than anyone could reasonably consume.