A Down-and-Dirty Look at Addiction, From the Inside Out 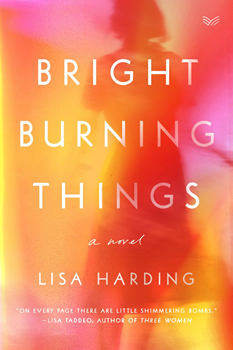 Sonya Moriarty used to be a talented actress before she had Tommy. Now, the applause is gone, and she no longer has to be “brilliant”—she just has to be “present, sober, and normal.”

In her American debut novel, BRIGHT BURNING THINGS, author Lisa Harding takes readers on a realistic trip into the spiraling vortex of addiction.

Sonya knows she must be stable and nurturing to her four-year-old son, Tommy, but the rest of her body screams for alcohol. “Some otherworldly force has made its headquarters inside me and is issuing instruction I’m powerless to resist.” In her befuddled mind, Sonya convinces herself that her son is just fine. After all, their dog, Herbie, takes good care of him, never leaving his side.

A full-time mother, she desperately tries to care for Tommy. Being with him is the “only place in the whole world where I now hold any power, where my actions have any agency. Finally, I have stepped into the role of the director or, even better, the writer, and these characters are mine to do with as I want.”

But Sonya knows her temper has been short, and she comes dangerously close to hurting Tommy and Herbie. She tries to erase it from her mind until Tommy pleads with her, “Don’t let the bad fairy fly inside tonight, please, Yaya.” 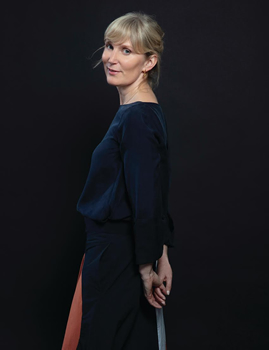 Her “flirtation [with alcohol] had turned into a full-blown affair.”

Even when her neighbor notices her motherly neglect, Sonya rationalizes away her concern. She’s just a busybody who can’t mind her own business. But when Sonya’s estranged father shows up on her doorstep, she must consider whether she’s a “Monster Mother.” If she doesn’t go into rehab, her father tells her, the authorities will take Tommy away.

Sonya reluctantly moves to “the madhouse” and attends a 12-week program of abstinence. There, she passes 192 hours “in a haze of rosary, meetings, woodwork and work assignments”—feeding the chickens and cleaning the coop. She tries to connect with a Higher Power, but she doesn’t know who that Higher Power is. But one thing she does know: The role she must play to get out of that place is “Ms. Sanity.”

But staying clean is harder than she expects.

BRIGHT BURNING THINGS is a scared-straight story written in powerful prose that sucks readers into the addiction abyss along with Sonya.

Here, Harding chats with The Big Thrill about her inspiration, her analysis of addiction, and how she writes realism into the novel.

What was the inspiration for the story in BRIGHT BURNING THINGS? 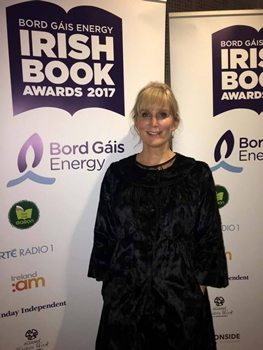 Harding at the 2017 Irish Book Awards, where her debut novel, Harvesting, was shortlisted for the Sunday Independent Newcomer of the Year award

My life has been deeply affected by loving people afflicted with alcoholism. It’s a profound sadness to watch someone you love destroying themselves. The more I learned about the disease of alcoholism, the more I understood it is not a “choice” or “weakness” of the person who is drinking.

Sonya is a single mother who uses alcohol to soothe herself and recreate the highs of her former life as a stage actress. When we meet her, she is in full-blown addiction—isolated, lacking supports, and putting her young son and rescue dog at risk. She is hard to like, but through writing this novel and inhabiting her head, I experienced the gargantuan battle she faces every day with her addiction. It helped me understand more fully how hard recovery is and how destructive behavior doesn’t always equate with a lack of love. Sonya adores her little boy, even as she is hurting him.

I wrote this character before the pandemic hit and then I found myself (almost) living that strange, isolated narrative. The lockdowns were intense and confronting times, particularly for those of us who lived alone. So many of my friends are performers, and they haven’t expressed that part of themselves for 20 months now. They all said how difficult it was, how it was like a part of themselves was cut away. 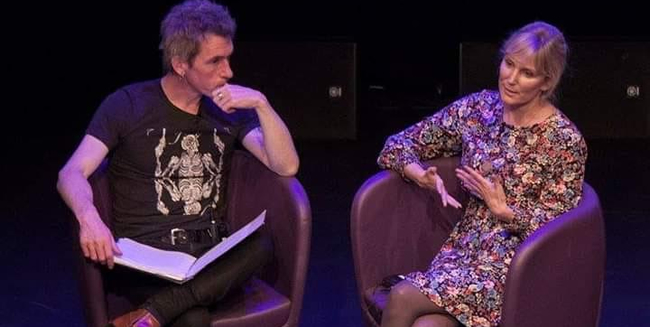 Sonya, a former actress who is no longer acting and a single mother who has sole custody of her young son, finds herself in that position in the novel. Another unfortunate parallel is the increased reliance on alcohol for people trying to soothe their anxiety, with little support or outlets. In a weird way, I feel the character of Sonya embodies the particular (if extreme) challenge of those living through the pandemic alone.

Why did you focus on addiction in the novel?

I’m fascinated by the self-destructive impulse in the human psyche (“the imp of the perverse,” as beautifully articulated by Edgar Allan Poe) which can work against the self’s better instincts. I have long asked myself the question: Where does addiction stem from? Is it genetic, chemical, trauma-related? Probably a combination of all three. Being around people with addiction has formed me to a great degree: watching people I love not be in control of themselves. That central conflict in the self makes life and loving very difficult.

Sonya’s experience and denial in the novel is so viscerally real. Where did you get this powerful personal perspective for her? 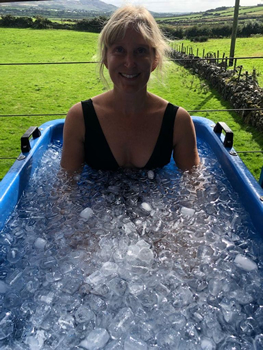 My training as an actress allows me to inhabit a character, and it’s how I write, from the inside out: “method writing” if you like. I wrote Sonya in the first-person present tense to make the experience of encountering her on the page fully immersive and, yes, experiential for the reader. Watching people around me battle with this terrible personality-altering addiction has long obsessed me. Why won’t they stop? Don’t they care enough about me/about themselves?

I wrote from the perspective of the alcoholic to grapple with these questions. Denial is an interesting aspect of the human makeup. We deny reality when it is too hard to face. And for an alcoholic mother who’s causing damage to her beloved child, it is a very necessary survival strategy, until it isn’t. It’s difficult to face up to our shortcomings, or even realize them.

Can addiction sneak into someone’s life and take over before they realize it?

Yes, I think it can. I have quite an addictive, or obsessive, personality which has latched on to different things at different times in my life, including the drug of “attention.” Quite lethal for someone who is seeking to feel loved in the world. Once I faced up to this aspect of my personality, I could see how easy it is to get addicted to anything.

For Sonya, this is a white wine addiction, which is quite a sneaky one as society sees it as a middle-class tipple, a harmless indulgence, an innocuous way to unwind and “treat yourself.” For an individual with an addictive personality, who experiences a gaping “hole” inside, this is dangerous territory. Then add in isolation, a chemical reaction in the body and brain, and a person can find their thoughts and actions controlled by the substance. Their rational, conscious selves are no longer running the show.

What message would you like readers to take away from the book? 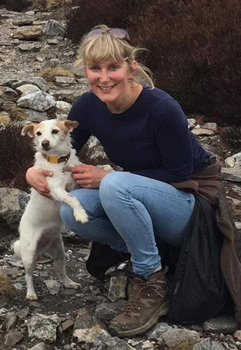 Harding and her dog Faye on a mountaintop

Addiction is a complex state for the sufferer and those around them. That it is not a “choice” or “weakness”; it is a destructive disease like no other, as it convinces the sufferer they don’t have it. Denial is huge for all the alcoholics in my life; it is a way for them to cope with being addicted, to cope with the hurt they’ve caused others, to shut down their intense feelings of being unworthy and unlovable.

I wanted to explore this topic through the lens of motherhood as the stakes are so high here: for the child in the situation, there is great potential for damage, and there is also potential for love to burn through. Love is not always enough, of course not. It would be simplistic to say this, but it helps. For Sonya, it is a huge part of her drive to get sober. She adores her little boy, and even though her behavior has already done significant damage to him, she wants to change. I loved her so much in the end because she faces down the “imp.”

What advice can you give to families struggling with addiction?

It’s important to know that the addiction is bigger and more powerful than you, that it’s not your fault; nothing you did or do is causing anyone else to drink. It’s important to know you are not alone; there is help, and it’s imperative to seek it. No amount of loving, coercing, manipulating, cajoling, or self-sacrifice will ever make an addict stop. The desire to stop has to come from them. Step aside, with love, and put the focus on your own precious life, which can get hijacked by loving a person in the throes of addiction.

So far, I’ve written about topics I feel passionate about, things I want to shine a light on. There is an emotional charge to my writing that comes from a pure place. But there is room for many kinds of writing, and I don’t know if I’ll burn myself out if I continue writing at this level of intensity! The main advice I’d give is to just do it; trust that you have something to say, trust that you have a voice, and as the wonderful Elizabeth Strout says, “write with authority.” I have always loved this advice and follow it.

I want to set up a dog sanctuary somewhere sunny. Sunshine and dogs and books is a recipe for a happy life for me.