Even Fairytale Lives Can Have Deadly Secrets 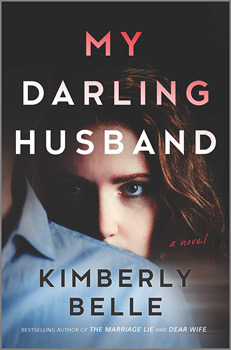 In her newest thriller, MY DARLING HUSBAND, bestselling author Kimberly Belle shows what can happen when even the very best spouse keeps secrets.

Jade Lasky is sure she sees a man following her, but her famous-chef husband, Cam, thinks she’s just being paranoid. Why would anyone want to harm them? Yes, they have multiple restaurants, a beautiful home, and a happy family, but they’re not wealthy.

When Jade and the kids—six-year-old Baxter and nine-year-old Beatrix—pull into their garage after Beatrix’s violin practice, Jade was distracted and didn’t sense the man hiding in the corner, dressed in all black, wearing a ski mask, and holding a gun.

Jade doesn’t know who the man is, but something about him seems familiar.

He takes Jade and the children into the house where he will hold them until a ransom is paid. Jade knows the money shouldn’t be a problem—Cam is a well-known chef whose face was on the cover of Atlanta Magazine. His name is synonymous with high-end dining, with luxury.

But what Jade doesn’t know is that Cam has been hiding his devastating situation—he’s broke. As he admits to himself, “Atlanta’s Steak King is in hock up to his rent-a-crown. Lasky Steak is a house of cards. My success is a sham.”

And his flagship restaurant—the one with three chandeliers that each cost $17,500—burned to the ground just that morning.

As Cam struggles to come up with the ransom money of exactly $734,296 in cash by 7 p.m., Jade tries her best to make sure she doesn’t anger the kidnapper. She doesn’t want her kids to grow up without a mother, but she’ll be damned if she’ll let some intruder with a gun hurt her children. And Jade tries to figure out why the amount of the ransom is so specific.

As the hours count down to the deadline, Jade starts to put the puzzle pieces together. She realizes her life with Cam is nestled inside a nest of secrets they might not escape without injury.

Written in chapters that alternate between points of view of the different characters—and also a news interview between Cam and a journalist—the countdown until the ransom deadline raises the tension. Will the Lasky family survive Cam’s treacherous deceptions?

In this exclusive interview, Belle speaks to The Big Thrill about her inspiration, how far people might go to protect their families, and how secrets can explode when you least expect it.

What was the inspiration for the story?

Like all fiction, MY DARLING HUSBAND is rooted in truth. I live for much of the year in Atlanta, a city with its fair share of violent crime. Home invasions occur there often enough it’s almost easy to become numb to them… until one day it happened to people I know. Their story began much like Jade’s: an armed stranger confronting the mother and children in the garage and forcing his way inside. The ransom he demanded was an odd amount, a number they later learned he’d gotten from a bank statement in their mailbox.

Thankfully, that family survived, but their experience got me thinking. What would I have done in that mother’s shoes? How far would I go to save my children? My answers formed the basis for Jade’s actions.

Discuss the parallels between Jade protecting her children and the kidnapper protecting his daughter.

When I came up with this story, what I wanted to shine a light on was exactly that—the parallels between the predicaments of the intruder, Cam, and Jade. I dropped them into a situation where there were no good answers and gave them conflicting goals and backstories, but their motivations are the same: to provide for and protect the people they love most. It’s something I think every reader can relate to, even if they don’t always agree with the characters’ actions.

Is it ever right to break the law to save your children?

I don’t know about “right,” but I’m a mother, so I can sympathize with anyone who’s put in a position of having to break the rules to save the life of their child. In this story, I take things to the extreme for all three of my main characters, but I think any parent would sympathize with their plight. Even the kidnapper’s. The fear and frustration that led him to this decision, his sense of desperation. His back was against the proverbial wall, and he saw no other way out. I don’t know if I would have done the same in his position, but I understand his reasons.

A theme in your novels is how secrets kept from a spouse can endanger the family.

I love writing about secrets in a marriage, because every marriage has them. And while there are some valid reasons to keep a secret from your spouse, sharing your life with someone means being honest about the big things. Money problems, addictions, people or incidents from the past that can come back to bite you. Cam kept a couple of biggies from Jade, secrets that turned out to be deadly. Not every secret in a marriage will be as life-changing as Cam’s are, but I think holding back on the big stuff can make even the most solid marriages rocky.

It’s probably impossible to write a book without slipping in at least a couple of opinions about how the world works, but I try to stay away from messages and hold up a mirror instead. One of the big issues in this story is healthcare, and each character comes to the table with their own prejudices and opinions based on their experiences and family history. Another is wealth and social status, and how money—having it, needing it—can color how you see…well, pretty much everything. With each issue that comes up, I work hard to portray both sides of the coin and then leave it up to the reader to decide whether they agree.

I’m working on a story about an Instagram influencer who, after one of her posts goes viral, finds herself on the receiving end of a social media dogpile. And the threats don’t stay confined to online. Very real danger is circling ever closer to her and her family, and her marriage cracks under the strain. It’s a story that explores cancel culture, our need to be seen and admired by strangers, and the dangers we might face when our private lives become public.

Once we send a book out into the world, so much of what happens is out of our control. Market trends, publicity that doesn’t quite catch on, a pandemic that comes out of nowhere. Success isn’t always predictable, and penning a bestseller often feels like a mixture of hard work and pixie dust.

So my best advice is to find your tribe and love them hard. Surround yourself with fellow authors and treat them not like competition but as a refuge. Use them as sounding boards, brainstorm buddies, and accountability partners. Ask them questions, get their advice, let them talk you off the ledge. This job is so much more fun and fulfilling with friends.

I wrote MY DARLING HUSBAND during lockdown—my pandemic book that has nothing to do with the pandemic—and it’s the fastest I’ve ever written a story, in four months, while a first draft usually takes me double that. Partly because there was little else to do, but mostly because it provided the perfect distraction from all the scary developments happening outside my family’s bubble.

All the helplessness I felt, all the fear and confusion…it was almost a relief to transfer these feelings to the page. Jade’s situation differed greatly from mine, but she was working through a lot of the same emotions, and writing her story helped me process mine.