Handing Out a New Set of Orders 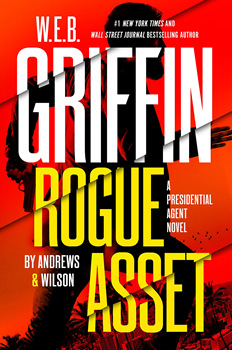 You’d think that the writing duo of Brian Andrews and Jeffrey Wilson would be content with writing the bestselling Tier One and Sons of Valor series, not to mention introducing a new character with Dark Intercept in September. Yet, they have one more card to play before the end of the year, this time navigating uncharted territory for them as they take on the mantle of writing W.E.B. Griffin’s beloved Presidential Agent series with a new novel, ROGUE ASSET. In short, they handed Charley Castillo a new set of orders.

The novel opens when the secretary of state is kidnapped during a meeting in Cairo. His entire security team is dead, leaving no clues to follow—but everybody knows the clock is ticking and more than the life of America’s top diplomat is at risk.

That successor would be P.K. “Pick” McCoy, a good candidate in his own right—except Charley wasn’t the one to pick him. That must have hurt his pride. 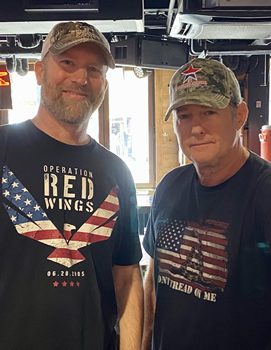 Andrews and Wilson at Nashville’s Redneck Riviera, where they christened a cocktail named in honor of their Sons of Valor series

“When we first started writing, we weren’t sure how the relationship between McCoy and Castillo would play out,” Andrews and Wilson say. “When Charley finally gets read in on the plan, he reacts exactly how readers who know Charley would expect. Basically, I’ll decide how and when I pass the torch and whether I even want to. Which begs the question, if you’re P.K. McCoy and some dude is supposed to pass the torch and won’t, then what? Oh, and let’s throw in another wrinkle—what if the guy who is supposed to accept the torch (in this case McCoy) doesn’t want it? In a perfect world, everybody falls in line and does what they’re told, but we don’t live in a perfect world, and that’s what makes this subplot so delicious in ROGUE ASSET. That’s a very long-winded way of saying that this book both is and is not a book about passing the torch.”

The early relationship between Castillo and McCoy focuses on a generational clash of sorts, almost like Mel Gibson and Danny Glover’s characters in the first Lethal Weapon film.

“We love the Lethal Weapon comp and take that as a huge compliment,” the authors say. “It wasn’t our intention to channel that film, but there certainly are echoes in the banter and generational jibes between Castillo and McCoy. The funny thing is, both these guys are more alike than either wants to admit, and we think that’s what makes it work and still feel different from Gibson and Glover’s interactions. The inevitable conflict found in the forced, and for both of them unwanted, partnership—combined with both the generational and personality differences—made for a rich supply of material for the characters’ relationship arcs.”

Unlike their other works, ROGUE ASSET features characters that weren’t created by Andrews and Wilson, and that took a different approach in the writing dynamic. 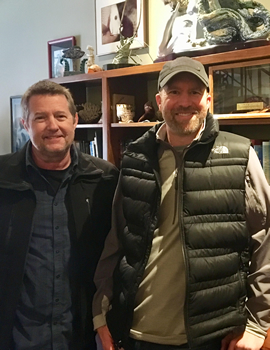 “When writing characters created by others, we believe there’s an incumbent responsibility to honor the ethos and canon of the creator,” they say. “Our job was not and is not to reboot the series, or reboot Charley, for that matter. He’s the same Charley; he’s just in a different place in his life. Our fundamental approach did not change in that our process is to dialogue regularly about our characters and their head space. What did change was that we needed to refamiliarize ourselves with Charley’s mannerisms and personality. We’re both lifelong fans of the series, but we did a deep dive back into the previous books to get to know Charley and the other supporting characters again.”

The best advice they received during the process came from the series’ editor, Tom Colgan, who encouraged them not to try and reproduce Griffin’s incredible storytelling style, but to write as Andrews and Wilson, honoring the characters and universe more than the style.

The last book in the Presidential Agent series, Hazardous Duty, dates back to 2013, while the new one is set in the present and takes into account the passage of time. Other series have taken different strategies, like James Bond, who has stayed ageless regardless of time, or have even been rebooted a couple of times. However, ROGUE ASSET is more like Robert Ludlum´s Matarese Countdown where the hero’s age from The Matarese Circle is taken into consideration.

“That’s right, and we considered both options,” Andrews and Wilson say. “Ultimately, working with Putnam and the estate, we chose to age Charley because it afforded us the opportunity to be more creative with the story and develop the succession plan subplot with Pick McCoy Jr. This also allowed us to bring the story into modern day, since an enormous amount has changed in the geopolitical landscape in the last eight years. Eight years seems like a short time, but not in terms of changing threats and geopolitical players, to be sure. Also, at a personal level, we feel that aging and ‘aging-out’ are authentic and emotional experiences that resonate with readers, but they’ll be delighted, we hope, to find Charley still has plenty left in the tank.”

As the duo took the series, they felt it was important to focus almost exclusively on Charley to give his fans an opportunity to get inside his life as it is at the beginning of the book, when he’s in full retirement mode. Bringing back the entire cast would demand backstory for all of them, explaining what has happened with their lives in the interim. That may have been too much for one book. They made an exception, though.

“We did bring back Natalie Cohen because the working relationship between her and Charley was simply too rich and explosive not to,” they say. “Making her the President was irresistible, and we laid the groundwork for tension in future books when their larger-than-life personalities collide.”