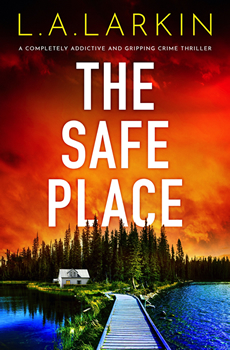 Eagle Falls is a sleepy town in Washington State threatened by terrifying wildfires. So when families start dying in house fires, nobody guesses they’re deliberately lit by a killer who uses fire to cover up his crimes.

Jessie Lewis, a former firefighter and survivor of domestic abuse, sleeps with a gun on her bedside table. Jessie alone witnesses the killer in action, but nobody believes her. She forms an unexpected friendship with Ruth Sullivan, a retired FBI agent. Both women find themselves on the trail of the arsonist, but with Ruth injured, will Jessie have the strength to take him down first?

Author L.A. Larkin was kind enough to take some time away from her busy writing schedule and have a quick chat about THE SAFE PLACE—and what she’s working on next.

In THE SAFE PLACE, the reader is given the opportunity to view the story through multiple points of view, including the antagonist’s. Who was your favorite and your most challenging, and why?

THE SAFE PLACE has two primary narrators but only one hero—Jessie Lewis. The serial killer has some chapters from his/her POV, as does the sheriff. The first challenge I faced when writing THE SAFE PLACE was balancing the airtime between the two main narrators, Jessie Lewis and Ruth Sullivan. They are very different women, but both are victims and haunted by their past. Jessie has been the victim of an abusive relationship, and Ruth is terrified of fire, having been badly injured in a bomb blast. Despite their differences, they come together when Jessie is accused of being the serial arsonist and Ruth, formerly FBI, believes Jessie is innocent.

The main challenge was writing the chapters from the serial killer’s point of view. Not only did I have to ensure these chapters didn’t give away his/her identity or location, I also had to create the voice of the killer. I had to think like a serial killer and create the voice of someone who gets a real kick out of inflicting pain and who relishes the power that lighting fires gives them. It was critical that the killer’s words chilled the reader’s blood, but they weren’t over the top. They had to be credible. So I researched the motivations and personality traits of serial arsonists. I also looked into the FBI’s research on serial killers. I watched interviews with serial killers to observe their body language and how they spoke.

The most enjoyable point of view to write was undoubtedly the central character, Jessie Lewis. She’s a young woman who has been ostracized from her hometown, and she lives a lonely life in the woods. Until the serial killer starts to stalk her, Jessie’s greatest fear is her ex-boyfriend, who abused her when they were together. When she reported it to the sheriff, she wasn’t believed. He is the town hero: commander of the fire station. So when Jessie glimpses the serial killer in action and tells the sheriff, yet again she isn’t believed. And nor is the sheriff willing to protect her. I really loved writing Jessie Lewis because her character arc takes her on a journey from distrusting everyone to having to trust someone at the climax of the book in order to save her life.

Australia and the Pacific Northwest have had more than their fair share of devastating wildfires. As a resident of Australia, what were the pros and cons of setting THE SAFE PLACE in Washington State? 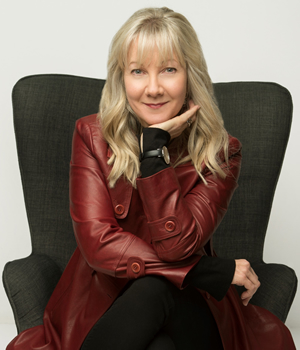 THE SAFE PLACE is all about fire: a wildfire that threatens to engulf a small country town and a serial killer who uses fire to cover up his crimes. I chose to set the story in Washington because I know the state well and because the Pacific Northwest has suffered from terrifying wildfires recently. I live in Australia, but I set my thrillers in countries all over the world. It keeps my writing fresh, and it enables me to choose the right locations for each particular story.

In the lead-up to Christmas 2019 and into early 2020 it seemed as if Australia was on fire. People I know lost their homes. Whole communities were wiped out. Wildlife and trees for thousands of hectares were obliterated. I vividly remember waking up one morning to find the sky was the color of a bruised peach and everything was covered in ash: windowsills, cars, trees. I have friends who are volunteer firefighters, and they told me of the horrors they saw fighting the wildfires, and they also told me about house fires and how quickly they spread. It was relatively easy to use my personal experience to create the world of fire in THE SAFE PLACE. I spoke to a volunteer firefighter in Washington State, and he helped me with local firefighter terminology and understanding fire-fighting equipment.

Are Jessie’s and Ruth’s stories finished, or can readers expect to see them pop up again?

Spoiler alert: I leave the end of the book with both characters starting new and happier lives. Depending on how well THE SAFE PLACE is received by readers, there may be a sequel. I would certainly love to write it.

The emotional rollercoaster ride. The plot twists. The complex and intriguing characters. The puzzles that need solving. The dramatic climax. Yup, I love thrillers!

In addition to thrillers, you also write cozy mysteries. Are there any other genres that you’re curious to try?

I write cozy mysteries as Louisa Bennet. In fact, I have a new dog detective mystery about to be released, The Bone Ranger, published by Clan Destine Press. It’s about a dog who solves crimes that “hoomans” can’t, and the dog, Monty, is the main narrator. The secondary narrator is Rose Sidebottom, who is struggling to prove that she can make it as a detective. It’s fun and uplifting, and very different from my thrillers. When I write the dog detective mysteries, I find I’m smiling to myself. They are a salve to the darker tone of my thrillers. I don’t think I’ll have the time to explore any new genres in 2022 because I have another cozy being published, as well as three crime-thrillers.

What is your favorite part of the writing process and why?

My favorite part of the writing process is the very beginning. Coming up with the ideas, plotting the novel, and then writing the first draft. It’s like starting out on an adventure and you’re not quite sure how it will pan out. It’s a real thrill.

Bartie, the central character’s rescued golden retriever, is based on a real dog who passed away recently, and I wanted Bartie to live on in this book. He was a loyal and loving friend to his owner, just as Bartie is to Jessie Lewis in THE SAFE PLACE.

Can you tell us what you’re working on next?

I’m writing a new dog detective mystery as Louisa Bennet and three crime-thrillers/police procedurals as L.A. Larkin—a new series that will start to appear at the end of 2022.

L.A. Larkin’s crime-thrillers have won her fans all over the world. Described as a superb “chiller thriller’” writer by Marie Claire magazine and praised by the king of crime, Lee Child, Louisa likes to write stories with lots of plot twists and characters that surprise. She has a Bachelor of Arts in Literature and teaches creative writing at the Australian Writers’ Centre. She has been on the organizing committees of the prestigious Ned Kelly Awards and Sisters In Crime Australia. Born in England, she lives in Australia and sets her current novels in America.