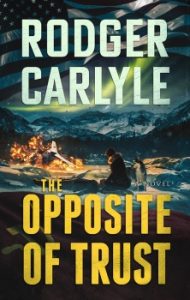 A Russian airman survives the crash of his bomber on an Alaskan lake. He’s flown the mission in hopes of freeing a wife he hasn’t seen since the Stalinists in Russia sent her to a gulag. The warrior is rescued by the widow of a man destroyed in the Washington, DC, anti-communist hearings. Her own intelligence career was shattered in the same hearings. Alone in a cabin, hours away from the next human being, their shared betrayal sparks feelings that each thought were forever gone.

Ellen and Anton’s impossible affair faces one major threat: Each is a trained professional and patriot who together have the key to stopping the deadly North Pacific air war between the US and Russia. Is it worth risking what they have to do what each knows is right? What do they owe their governments that in the recent past betrayed them?

Rodger Carlyle recently spent some time with The Big Thrill discussing his latest thriller, THE OPPOSITE OF TRUST:

First, I hope they have a thrilling and memorable read. The political undertones are similar to today’s, with external threats compounded by distrust of government across the globe, driven by extremist decision-making, the lessons lost.

I believe that the nation’s and world’s challenges can only be overcome by ordinary people taking on seemingly impossible challenges. I love stories where no superhero is riding to the rescue. My heroes may be the primary protagonists or a girlfriend or teacher or quiet brother.

The biggest challenge was trying to coax the Russian side of the story from those I interviewed; and that was also the greatest opportunity. It was rewarding watching the interviewees warm up to telling a story they had suppressed for decades.

Even as one who studies world politics, I was a bit shocked to see how political ideologues can drive normal citizens apart, and how this is not a new phenomenon.

The whole “superhero will save us from certain doom” convention.

While vastly different beliefs can create challenges between people, they are no boundary to love.

The old adventure writers such as Alistair MacLean, Ernest Gann, Sydney Lawrence, and Hemingway and contemporary writers like Cussler, Clancy, Jack Higgins, and Brad Thor have all influenced my writing, primarily by painting such clear pictures of setting and motivation.

Rodger Carlyle is a novelist, pilot, adventurer, political strategist, and ghostwriter who writes stories about reluctant heroes. His experiences stretch from New York to Los Angeles, from Amsterdam to Khabarovsk in the Russian Far East, and from Canada into Latin America.