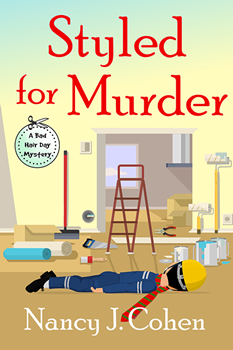 “There’s a dead guy in our shower.”

Having reached Book 17 in the A Bad Hair Day Mystery series, hairstylist-slash-amateur sleuth Marla Vail is almost as familiar with murder as she is with up-dos. In previous books, Marla has had neighbors disappear, professional rivals offed (not by her, of course!), and horse ranches bamboozled, but this is the first—and hopefully only—time a dead body has been found in her mother’s shower.

With the police happily pinning the murder on Marla’s stepfather and a whole host of disgruntled characters who had plenty of reasons to wish the deceased dead, Marla has her work cut out for her once again.

In this interview with The Big Thrill, Nancy J. Cohen tells us what goes into keeping such a long-running series alive.

STYLED FOR MURDER is #17 in your Bad Hair Day series. How have you evolved the main character, Marla Vail, over the last 16 books?

Hairstylist Marla Vail started out as a 34-year-old divorced woman who didn’t want children due to a tragedy in her past. Over the course of the series, she fell in love with Detective Dalton Vail and his teenage daughter. They got married, moved into a new house, and honeymooned at his family’s dude ranch in Arizona. Marla gradually warmed to the idea of having her own child after she let go of the past and accepted that she’d make a good mother. She’s come a long way from her single days in the first story, maturing and turning into a loving wife and mother to a son and stepdaughter. It’s critically important in a series for your main characters to grow and change because this is what draws readers back. As our relationships evolve in real life, so they should in a series. 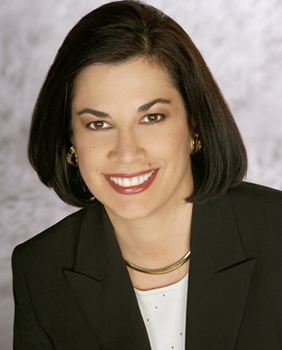 What is your favorite thing about Marla? What do you feel makes her successful as a detective?

As a hairstylist and salon owner, Marla needs to be a good conversationalist. She uses these skills to encourage people to talk. She can approach suspects from a different angle than her detective husband. They’ll view her as much less intimidating than a police officer and are more likely to confide in her. Nor is she attached to a set of rules like her husband in his job. She can finagle her way into someone’s house, for example, and snoop around for clues. Her sense of compassion also comes across to others and makes them admit things they wouldn’t tell the cops.

Has writing the Bad Hair Day series become easier over time or harder? Have you ever felt that you’ve written yourself into a corner?

Writing a book is never easy, although it is more comfortable for me to jump into Marla’s world than to start something totally new. Her supporting cast of characters are old friends by now. Her relationships continue to evolve, and this helps keep each book fresh. Plus, I like learning something new with each book, and that makes it exciting for me. If I ever write myself into a corner, then the series is over.

Marla Vail is a hairdresser—is that something you’ve ever considered as a career path? What made you choose that profession for her?

I have no skill at all to do my own hair, so I greatly admire a hairstylist’s talent and training. I got the idea when I was getting a perm and waiting for it to process. I looked around at the other customers and thought, “We need something gripping to read to kill time. Why not kill off one of these ladies?” And that’s where the idea was born. A hair salon is the perfect setting for an amateur sleuth mystery. You can eavesdrop on conversations and overhear gossip. My sleuth doesn’t have to be stuck in the salon, either. She can be hired to do a wedding party or pageant contestants on location.

Being that this is a lengthy series, you have come up with some creative hair-inspired titles (Died Blonde, Shear Murder, and Killer Knots, to name a few). How long does it take you to think of these titles? Do you have a list of future hair puns to pull from? Do you ever worry about running out?

I have a whole page full of titles for books I’ll probably never get to write. Titles are the easy part. Writing all those books takes time, and I am not a super speedy writer. I already have set the title for the next book in the series.

You wrote a nonfiction guide to writing cozy mysteries (aptly titled Writing the Cozy Mystery). What do you think most writers don’t understand about crafting a good cozy mystery?

It’s very important to meet reader expectations. There’s a certain structure that’s part of a traditional cozy, and when you deviate from this path, readers may be disappointed. Take the final confrontation scene, for example. You expect the sleuth to confront the killer near the end. She has to escape or defeat him through her own resources or skills you’ve introduced earlier. If some other person jumps in to rescue her, or an act of nature intervenes, I’ll feel cheated as a reader. The same goes for other factors, like the book cover should match the type of content. Pets and children can’t be harmed. No bad language or blood and gore. These go along with the cozy genre. You want to give readers the type of book they expect and that you promise with your book cover and blurb.

I love hearing from readers. I write so other people can escape from their daily drudgery into one of my books. If my stories can help them, then I’ll keep writing. So reader feedback keeps me going and makes my work meaningful. I appreciate every comment. As for what I wish was easier, that would be getting more readers to write reviews. Customer reviews are incredibly helpful to an author but not everyone will take the time or realize how critical these reviews are to a book’s success. The best way to give back to a favorite author is to review her book.

Any hints about what Marla will be encountering in the next book or further along in the series?

Dalton is a history fan, so I see a battle reenactment or a historic town celebration in the near future. I still have to do more research to determine the details.