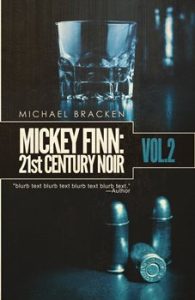 MICKEY FINN: 21st Century Noir, Volume 2, the second entry of the hard-hitting anthology series, is a crime-fiction cocktail that will again knock readers into a literary stupor.

Contributors push hard against the boundaries of crime fiction, driving their work into places short crime fiction doesn’t often go, into a world where the mean streets seem gentrified by comparison, and happy endings are the exception rather than the rule. And they do all this in contemporary settings, bringing noir into the 21st century.

Like any good cocktail, MICKEY FINN is a heady mix of ingredients that packs a punch, and when you’ve finished reading every story, you’ll know that you’ve been “slipped a Mickey.”

MICKEY FINN: 21st Century Noir, Vol. 2, is an anthology, so what came first was wondering what would happen if writers set noir stories in the 21st century. So many of the tropes of, and the suspense inherent in, classic noir rely on the limited technology of the time. A protagonist who has to find a landline telephone to make a call faces different stresses than someone who is connected 24/7 via a cellphone. At the same time, a protagonist with a cellphone may be tracked 24/7 and, thus, find it more difficult to hide.

I hope readers take away an appreciation for the dark side of mystery fiction, and a realization that unhappy endings can be as powerful—sometimes more powerful—than happy endings.

I’ve long been a fan of noir, and am especially drawn to stories of the little guy who makes bad decisions despite good intentions, and how those decisions lead to even worse decisions and worse consequences.

The biggest challenge came from having an open call. I received far more great stories than I could fit into MICKEY FINN: 21st Century Noir, Vol. 2, so I had to make hard decisions about which stories to include and which to leave out. Additionally, this is the second volume of an annual series. A story from the first volume received a Thriller Award and another story was nominated for a Thriller, so I felt some pressure to ensure that the stories selected for Volume 2 were of equal quality.

The biggest opportunity was discovering new writers—or writers new to me—and seeing how well their vision fit the theme of the anthology. Whether I chose their stories or not, I discovered several new writers I hope to read more from in the future.

What was the most important criteria in your selection process?

The most important criteria was how well the stories fit the theme and how well they worked within the limitations of the theme. If I felt a story was a good fit, I then looked at quality of writing and coherence of plot.

Michael Bracken has edited several previous crime fiction anthologies, including the Anthony Award-nominated The Eyes of Texas: Private Eyes from the Panhandle to the Piney Woods and the three-volume Fedora series. He co-edits (with Trey R. Barker) the serial novella anthology series Guns + Tacos. Stories from his anthologies have been short-listed for Anthony, Derringer, Edgar, Macavity, and Shamus awards and have been named among the year’s best by the editors of The Best American Mystery Stories and the editors of The World’s Finest Mystery and Crime Stories.