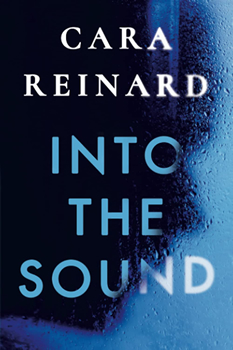 To say Holly Boswell and her sister Vivian had a fraught childhood is putting it mildly. Their parents were psychology professors who raised the siblings as if they were research subjects. Their mother was particularly driven to prove different developmental theories and actively manipulated their lives under the guise of “research.”

Their mother created a wedge between the girls—so decades later, Holly is surprised and then alarmed when Vivian calls her during a hurricane begging for help. “Someone is coming,” Vivian says before the line goes dead.

Holly becomes consumed with her search for her sister, forcing her to confront her alcoholism, a dysfunctional marriage, and the demons from her childhood. INTO THE SOUND is an adrenaline-fueled domestic thriller that you won’t be able to put down.

Author Cara Reinard was kind enough to sit down with The Big Thrill and talk about the twists and turns of her new release and share insight into its inspiration.

What inspired you to write this story?

One of my favorite novels is Gone Girl by Gillian Flynn, and ever since reading it, I’ve been inspired to write a missing wife book—one that cracks open the door to a seemingly perfect marriage and asks the reader to take a look inside and solve a mystery. I knew this premise had been done before, so I wanted to approach the project from a different angle. In this case, the missing woman, Vivian, is suspected of being swept away in a Long Island superstorm, but Vivian’s sister, Holly, is determined to prove otherwise. Vivian’s husband is also given a point of view in the story. This narrative structure adds an extra layer of psychological suspense as the reader tries to discern two very different versions of unfolding events leading up to the storm. The psychology of relationships in general is something that has always fascinated me, and I was happy to explore that construct while writing INTO THE SOUND.

The relationship between Holly and her sister Vivian, which is strained because of their parents’ decision to be researchers first and parents second, is the cornerstone of the book. Family dysfunction was also featured heavily in your novel Sweet Water. What draws you to write about complicated foundational relationships?

I tend to write the same types of books I enjoy reading, and my favorite novels are thrillers of all types that often include family dysfunction. The interest for this subject matter started early. My favorite authors as a pre-teen were in the horror genre: Stephen King, Christopher Pike, and R.L. Stine. Some of my favorite authors now are Gillian Flynn, Caroline Kepnes, Shari Lapena, and Liane Moriarty, and I’d like to think my writing is influenced by all these great authors. On a personal note, even though I’m happily married, my family has a high divorce rate. I’m sure growing up with domestic walls falling down all around me has also shaped my writing.

Holly is battling a lot of internal and external forces in this novel—her alcoholism, her unfeeling spouse, Vivian’s weasel of a husband, a crazy neighbor, and brushes with the law. How hard was it to take Holly through that emotional journey to get to the truth—not only about what happened to her sister, but also about their childhood?

Yes, it was tough because I haven’t personally experienced any of those same life traumas, but I really wanted the characterizations to ring true on the page. I’d say the largest challenge was tackling the editorial notes I received from my developmental editor on Holly’s alcoholism. My editor had advised me to thread Holly’s addiction throughout the whole book if it was to be believable, because alcoholism is an ongoing struggle for those who suffer. I did my best to incorporate her notes. The psychological experiments Holly’s mother performed on the girls was extremely difficult to draft, and I had to really push myself out of my comfort zone to create them. However, I’ve found that the hardest scenes to write are often the ones that resonate most with readers. And…those emotionally fraught sections of the novel were a necessary evil to set up the surprise ending.

You tell the story through both the eyes of Holly and Vivian’s husband, Clay, as well as give us glimpses into the past. How did having all these perspectives help you tell the story?

Writing the novel from Holly’s point of view gave the reader a different lens to examine the suspicious circumstances of her sister’s disappearance, especially when some of the clues Vivian left behind mirrored the strange happenings of their childhood. When the cops investigating the case refused to listen to Holly’s pleas, she was forced to take the investigation into her own hands. Clay’s point of view lends an antagonist voice to the story and an insider voice into the marriage. And the scenes that flashed back to Holly and Vivian’s childhood were pivotal to unlocking the clues to the present, but only Holly recognized what they were, making her journey to find out what really happened to her sister a solo and dangerous adventure.

You give us a plethora of suspects to chase after, each one more unsavory than the last. Which one was your favorite to write?

My favorite characters in this book were the “bad” ones. I’m not sure what that says about me, exactly, but the villains were the most fun to write. The mob cast that Clay was in cahoots with was probably the most enjoyable. One of my favorite movies growing up was Goodfellas, and there’s a scene in the book that could’ve been plucked right from the movie. The majority of readers will probably dislike Clay, and rightfully so, but I actually did enjoy writing his character as well, because he was an extremely flawed antagonist with real motivations. I did not enjoy drafting Holly’s depraved mother, Cynthia, but it forced me to stretch myself as a writer. This book was one of the darkest things I’ve ever written, packed full of rough characters. I’d say INTO THE SOUND is for readers who enjoy psychological thrillers—the kind that bend your mind inside out.

What other projects do you have percolating?

I’m currently on deadline to finish The Deb, a domestic suspense novel in which the hefty inheritance of four siblings brings out their deeply hidden secrets—and leads to murder. It’s a real whodunnit with dark humor, a quick pace, and my favorite characters yet! It will be released from Thomas & Mercer, January 2023.

Cara Reinard is an author of women’s fiction and novels of domestic suspense, including Sweet Water. She has been employed in the pharmaceutical industry for seventeen years, and while Cara loves science, writing is her passion. She currently lives in the Pittsburgh area with her husband, two children, and Bernese mountain dog.