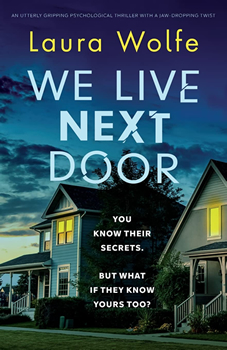 The pretty, leafy suburb of Ridgeview Pines is everything Jessica Millstone had ever dreamed of, and the perfect place for her and her husband, Mark, to raise their three-year-old daughter. But when a neighbor dies in a tragic accident and strange messages begin appearing on Jessica’s phone, Jessica realizes her new home isn’t as safe as she believed.

Because in Ridgeview Pines, everyone’s watching each other. And it’s all being noted down on an app called “The Neighbor List.” Everyone uses it—and most of the time it makes them feel safe, secure, protected.

But telling tales on your neighbors is also a way to make enemies… And it turns out that even in the safest suburb, there are people who’d kill to protect the secrets they are hiding behind their front doors.

Author Laura Wolfe was happy to sit down with The Big Thrill and share some insights into her latest thriller, WE LIVE NEXT DOOR.

Having grown up a few hours from Detroit, I love seeing it portrayed as a normal city, instead of a post-apocalyptic war zone. While Detroit has quite a history, what made you decide to set WE LIVE NEXT DOOR here?

I set WE LIVE NEXT DOOR in a fictional Detroit suburb, which I loosely based on the actual suburb of Royal Oak, MI. I loved growing up in the Detroit suburbs and now live about 30 minutes away in Ann Arbor, MI. I think people who envision Detroit as a post-apocalyptic war zone are people who have not visited the city in the last 10 to 15 years. Detroit’s downtown and many of the outlying neighborhoods have undergone a rapid revitalization in recent years. This boom has been helped by professional sports teams relocating their stadiums from the suburbs back to downtown and many companies moving their headquarters to the city and requiring their employees to live nearby. I mention Detroit’s Corktown neighborhood in my book because this trendy area appeals to 20-somethings and empty-nesters alike. Also, one of my family’s favorite restaurants is located there (Bobcat Bonnie’s.) When we visit the City of Detroit, we enjoy shopping at Eastern Market, eating at great restaurants, touring the Detroit Institute of Art, and taking our kids to plays, concerts, sporting events, and other exhibits. These are just a few of the opportunities that Detroit has to offer.

The book that started my addiction to the psychological thriller and suspense genre was In a Dark, Dark Wood by Ruth Ware. Since then, I have devoured her other books and also those by Lisa Jewell, Mary Kubica, Jennifer Hillier, and Shari Lapena. These women are all such talented writers, and I am grateful to have learned more about the genre by reading their books.

The main character in WE LIVE NEXT DOOR, Jessica, has a lot going on in her life. Who was the influence in writing her?

Jessica is a fictional character, so no real person influenced her. I did, however, hope to encapsulate in her character the often stressful and sometimes lonely experience of women who juggle many roles every day. Jessica is a mother of an active toddler, a spouse of someone who works long hours outside the home, a daughter of an aging mother, and a woman who must find her place among other women, some of whom she doesn’t have too much in common with. Because most women balance many competing roles, I think Jessica’s struggles are relatable. 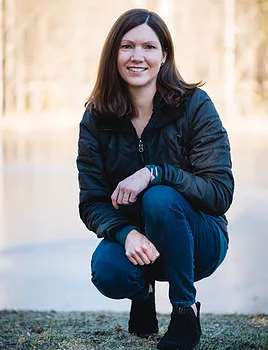 Many people have to reinvent themselves after having kids. The career someone went to school for and was so sure she wanted to focus on in her twenties might not be the area she still wants to dedicate her life to in her thirties, forties, and beyond. Jessica struggles to find a fulfilling office job after the birth of her daughter. I drew on some of the emotions I felt when making my own career changes after the arrival of my two kids when writing Jessica’s character. She has to answer many questions. For example, will Jessica choose to sacrifice time with her young daughter to reestablish her career in a field that no longer interests her? Will she have an opportunity to take a risk and earn less money but follow her creative passion? Or will she abandon her livelihood entirely to focus solely on raising her daughter? These are all choices many women must make. There is no right or wrong answer for everyone, but most people can relate to the struggle.

One of the themes of my book is that people are not always who they seem. The dead woman at the center of my novel was, by all accounts, a horrible neighbor and a mean person. However, digging deeper into her past reveals a harrowing secret and explains how she became the way she was. I hope WE LIVE NEXT DOOR causes readers to contemplate the reasons people with poor behavior might act the way they do.

The Neighbor List is influenced by popular neighborhood apps. Do you think localized apps like this are good for communities? If so or not, how?

Yes. I think apps, such as the one in my book can be helpful to spread information on local issues. I regularly use my NextDoor app to learn about road closures, new restaurants, volunteer opportunities, and other happenings in my community. Being an animal lover, I am especially happy when the app helps people locate their lost pets. The problem with these apps is when a few bad actors taint the experience for everyone else. Thankfully, most apps are monitored by an administrator who can remove abusive comments. Ultimately, I think the usefulness of most of these apps outweighs the few negatives.

WE LIVE NEXT DOOR was influenced by the popular Nextdoor app. In my novel, I created a fictionalized version of the app, called The Neighbor List. On the real life app, there are always one or two people in my town who seem to enjoy causing problems, making controversial comments, or acting downright rude. I realized a character who acted the same way on my fictional app would have plenty of enemies and make a perfect murder victim.

What’s next on the horizon for your readers?

I am nearing completion of my first draft of my next psychological thriller, The Girl Before Me, forthcoming from Bookouture in spring 2022. It centers around Rachel, a young mother who lands a great deal on an apartment in Chicago’s Lincoln Park neighborhood. She is relieved to leave an abusive relationship and excited to start her new life in the city with her six-year-old daughter. Soon Rachel realizes the woman who lived in the apartment before her has mysteriously vanished—or worse. What happened to the previous tenant? And could Rachel be the next victim?

Laura Wolfe is an Amazon charts bestselling author who writes fast-paced and twisty psychological thrillers and suspense novels. Her recent titles published by Bookouture include TWO WIDOWS, SHE LIES ALONE, and HER BEST FRIEND’S LIE. Laura’s YA mystery series and adult suspense novel, TOP PRODUCER, have been shortlisted for multiple indie book awards. Laura is a lover of animals and nature. When she is not writing, she can be found hanging out with her two kids, growing vegetables in her garden, or spoiling her rescue dog. She enjoys living in Ann Arbor, Michigan.